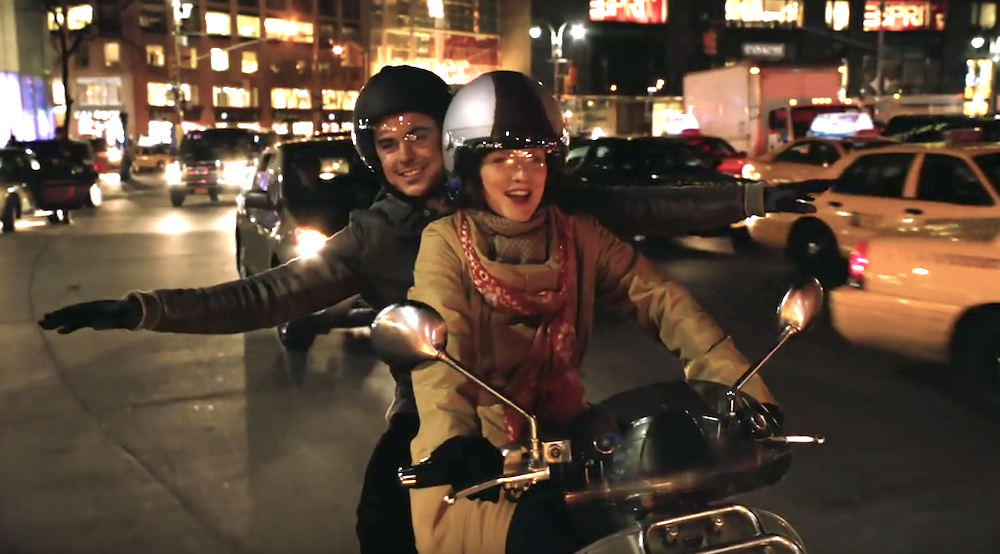 One of my favorite moments in the entire history of film is the magical finale to Nora Ephron’s masterpiece, When Harry Met Sally. I can’t help but cheer on Harry (Billy Crystal) as he darts down the streets of Manhattan on New Year’s Eve, finally realizing that he wants to spend the rest of his life with his soul mate, Sally (Meg Ryan). Harry bursts into a dull New Year’s Eve party that Sally is bored at, scoops her into his arms, and confesses his love to her, all while she tries to argue with him about it. It is truly a wondrous moment, and may be one of the only moments in a movie that actually made me believe in love.

As for another star-studded Hallmark Card-inspired love fest of a film, New Year’s Eve, the same cannot quite be said. There dozens of moments that are unintentionally hilarious and a lot of moments that will leave you scratching your head, wondering aloud, “What just happened?” Every time I thought that I had gotten the plot of the film down, another character and/or celebrity was introduced, all of whom are supposed to warm our hearts. I finally decided to treat the plot of the film like an episode of “Lost”, which I still don’t understand, and instead try to guess which celebrity would pop up next to tell me to “follow my heart.”

The film opens with idealistic images of New York City, which reminded me of either the opening to a sitcom from the 1970s or an advertisement for the newest season of “Glee” (minus the singing). We are introduced to our first character, Claire, who is played by Hilary Swank, whose job it is to make sure the ball drops on New Year’s Eve... a job that I would not imagine as being particularly pleasant. But the film blows it out of epic proportions as Swank runs around like a chicken with its head cut off, relying on a very bored-looking Ludacris as her confidante. I openly laughed at the rapper's unintentional (or maybe it was intentional?) deadpan delivery throughout the film multiple times, and got the strong impression that he was trying to sleep with Swank despite having a family of his own (now that would be an interesting movie!).

We continue to meet celebrity after celebrity, each of whom are introduced so quickly after another I felt as though I were watching some sort of benefit telethon. Katherine Heigl plays a shrill chef who never appears to cook, despite the fact that she is in charge of the biggest dinner in the city, and instead pines over her love, super-rock star, Jon Bon Jovi (in the film, Jensen, but really it’s just Bon Jovi). Heigl screams and throws tomatoes at a picture of Bon Jovi while ranting to her fellow chef confidante, played by Sofia Vergara. Vergara is by far my favorite part of the film, as she appears to be imitating a drag queen imitating Charo. She is a nice contrast against Heigl, who decides to play her character as seriously as possible, and even shows up in a skin-tight silver dress that looks like something Judy Jetson would wear to go clubbing. Every time Heigl attempts to be funny, Vergara tops her completely, and by the end, I just wanted Heigl's character to drown in a tub of tomatoes so we could then follow around Vergara in her low cut dress as she flirts with half the party.

Meanwhile, Michelle Pfieffer shows up as a pathetic loser (<-- actual quote describing her from the film), who enlists Zac Efron to help her fulfill her New Year’s resolutions in exchange for tickets to an awesome party-with-hot-chicks, bro! (as Efron describes it) I enjoyed watching Efron seem to have fun with not having to play a handsome leading man for once, and I am certain that if you took a shot every time he said “dude” or “bro”, you may get alcohol poisoning (so let’s not try and find out). Efron happens to be best friends with Ashton Kutcher in the film, who seems to be playing a very disenchanted version of himself. He meets (and later falls for) Lea Michele, who also seems to be playing a hyped-up version of herself in a stuck elevator, where she calls him out on his hipster nonsense, and, naturally, he instantly falls for her. Efron also happens to be the brother of Sarah Jessica Parker, who is trying to keep tabs on her teenage daughter, Abigail Breslin, who is fond of flashing random strangers in the subway. Parker is actually the long-lost love of Josh Duhamel, who is a suave businessman who hitches a ride with a group of slack-jawed yokels into the city where they discuss his heart. Seriously, I am not sure precisely what the point of these people were other than to show Duhamel that the "common man" has heart, but it's a hard message to sell when you've got a horny grandpa, argyle sweaters, and a really belligerent fat kid.

And the stories don’t end there, folks! Like a 1970s variety hour, there is an endless supply of guest stars, including: Robert De Niro as a dying man and Halle Berry his doting nurse; and Jessica Biel and Seth Meyers battling it out with another couple to have their baby at midnight so that they can win a bunch of money (if that’s not grounds to call child services, than I’m not sure what is). By the time all of these characters all crossed one another’s paths, I was still trying to figure out who was related to who, who was trying to kiss who, and precisely what year they were ringing in (the answer: 2012).

New Year’s Eve is a bit like being drugged by a concoction of Hallmark cards, Mylar balloons, and those little heart candies handed out on Valentine’s Day. It’s a movie that has no basis in actual reality, so there is no way to actually relate to any of the heartwarming stories on the screen. I found that the best thing to do while watching New Year’s Eve is to take bets with the people around you on which celebrity will show up next. Ludacris’s complete lack of care for the human race in this film is fantastic, and I enjoyed Ryan Seacrest as he once again played a caricature of himself. Director Garry Marshall has created a holiday classic that is hilarious for all the wrong reasons. The best way to get through this romantical hodgepodge is, get your friends together, and take bets on the following things: which products will receive the most placement, who will have the “cutest” scene, and whether or not any of the main characters will actually kiss at midnight.