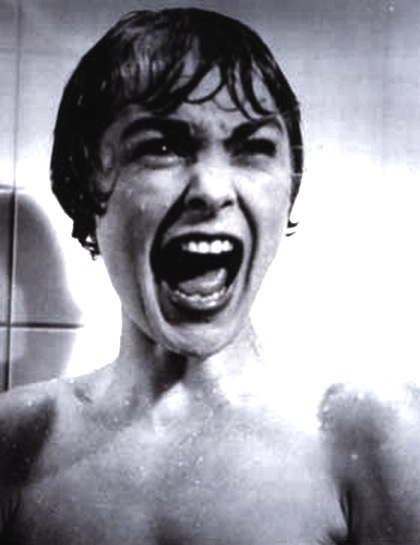 54 years ago today, in darkened theatres all across the country, millions of patrons leapt clear out of their seats when they saw Norman Bates's mother tear back the shower curtain and stab poor Janet Leigh to death in one of the most universally recognized, celebrated, and terrifying sequences in movie history. The film would go on to terrify and inspire other filmmakers for generations, including the current hit A&E drama series, "Bates Motel". For fans of the show who may not be familiar with the source material, READ ON...

The violence of Alfred Hitchcock's masterpiece, Psycho, might seem incredibly tame by today's Tarantino-ized standards, but back in 1960, blood and violence simply were not done in the movies. With every swipe of Mother's butcher knife,Psychoslashed away at the conservative traditions and restrictions that the film industry had been a slave to since the 1930s. And it's never been the same since.

What makes Psychoso brilliant is its veneer of utter normalcy -- these characters are all completely accessible. Unlike the Mike Myerses and Freddie Kruegers and Jason Vooheeses of today, Norman Bates could be living next door to you RIGHT NOW! He might have even helped you carry your groceries into your house!! Anthony Perkins (who should have been nominated for AND won the Oscar, in my humble-but-correct opinion) is so painfully relatable as the troubled young man who runs the creepy Bates Motel that you actually find yourself rooting for him at a certain point -- how disturbing is that? Such is the genius of Hitchcock; it's not the movie itself that makes you uneasy; it's discovering that you've been sympathizing with a homicidal maniac for 85 minutes.

For those of you of the younger generation, your perceptions or knowledge of this film probably have something to do with Vince Vaughn. Don't get me wrong, I love me some V.V., but he is no A.P. Do yourself a favor and go rent/stream/buy this film IMMEDIATELY. (A 50th Anniversary edition Blu-ray came out a few years ago to mark, well, it's 50th anniversary.) The creepiness factor holds up incredibly well, and if you want to see an example of pretty much perfect acting, look no further than Perkins's turn as Bates.

Check out the original trailer for Psycho below, which is actually more like a short film:

- Anthony Perkins had nothing to do with the famous shower scene; he was in New York rehearsing for a play when the sequence was shot.

- Psycho marks the first time a flushing toilet was ever shown in a film.

- The female lead, Janet Leigh, is only on screen for about 45 minutes, getting killed off a quarter of the way through, unheard of as much then as today.

- The film is based on a book by Robert Bloch, which you should read!

- The "blood" is actually chocolate syrup.

- The shower scene, which takes up only 45 seconds of the finished film, took 7 days to shoot and is composed of 78 separate shots.

- The sound of the penetrating knife was achieved by stabbing a casaba melon.

- AFI named this film the #1 Thriller of all time and Norman Bates as the #2 Villain of all time.

- All costumes were either purchased off the rack or came straight from the actors' personal wardrobes.