Highlights From This Year's BookCon in NYC! 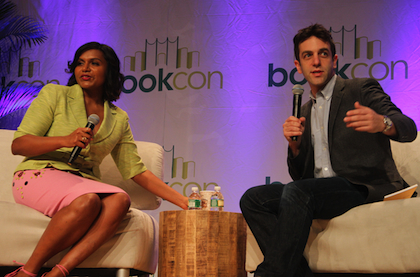 BookCon -- aka ComicCon for literary nerds -- recently held its annual convention for the second year in a row in New York City. BookCon greeted thousands of attendees who were eager to get their hands on some great books and chat with their favorite authors. Here are a few highlights from BookCon 2015:

Dozens of authors popped by to autograph books

If you ever wanted your favorite author to sign your favorite book, this was the time and place to do it. David Baldacci, Charlaine Harris, R.J. Palacio, Annie Barrows, Jodi Picoult, James Dashner, Elin Hilderbrand, Rainbow Rowell, Nelson DeMille, E. Lockhart, and even a few celebrity authors including John Green, Judy Blume, Jason Segel, Mindy Kaling, and Nick Offerman popped by. It was the celebration of authors!

Natt Wolff, one of the stars of Paper Towns and The Fault in Our Stars, admitted to being a huge John Green fan. This may partly be due to the fact that he has starred in the film adaptations of two of his books, as well as the fact that John Green is just pretty awesome. Green himself will make a cameo in Paper Towns, and while there will be differences between the book and the film, the film is still pretty amazing. Despite his new literary star status, Green admits to being the same nerd he was before, living a quiet life with his family and friends in Indianapolis.

One of the most crowded panels at BookCon featured Mindy Kaling and her buddy B.J. Novak, who answered questions about their work as writers. Kaling has a new book coming out entitled Why Not Me? which will focus on her conflicting emotions about having a successful career and a family. She admitted to being jealous of women such as Hillary Clinton, who have managed to do both. Kaling also entertained the crowd by admitting that she would love to host “SNL” and play all of the characters from “Empire”. That’s a lot of characters to channel, Kaling -- it’s time to work on your rapping skills!

Next year’s BookCon will be held in Chicago. Will you be attending?