Highlights from Season 3 of "Orange Is The New Black"! 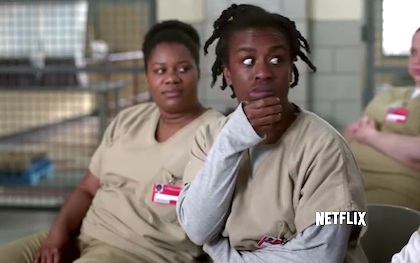 Last Thursday, the Netflix gods smiled down upon us and released Season 3 of “Orange Is The New Black” a day ahead of its scheduled release date. Hallelujah! And so, pausing only for work and screaming about the “Game of Thrones” season finale, I dove headfirst back into Litchfield Prison to catch up with them ladies in orange!

As always, this season featured all the spot-on performances, razor sharp dialogue, and clever twists that keeps viewers coming back for more every year. Here are some relatively spoiler-free highlights from Season 3 that you can’t miss!

- Everyone is sort of on equal footing now. While the first 2 seasons focused primarily on Piper and her experiences, she is now just another inmate. In fact, we don’t even see her until, like, halfway through the first episode! I prefer this format, as I was never completely invested in Piper anyway. Also, she goes completely off the rails this season. I can’t decide if that’s a good thing or a bad thing.

- There’s a big shake-up at Litchfield, so we see more behind-the-scenes machinations of people like Joe Caputo and the folks that he answers to.

- With that shakeup comes a new job opportunity for the ladies that promises way more pay than the other job duties! But only a limited number of the inmates will be chosen for the job, which, naturally, causes some tension.

- Red finds romance?? Maybe… Our favorite Russian spitfire could certainly use some companionship! Especially when her triumphant return to the kitchens doesn’t go completely as planned…

- Crazy Eyes becomes a writer! A writing exercise for a drama class becomes the biggest must-read at Litchfield. It even spawns fanfiction!

- Daya finds herself in more baby drama when Pornstache’s mom offers to adopt her baby. Daya is hesitant, but her own mother Aleida smells an opportunity.

- Speaking of Daya, her relationship with Bennett takes many twists and turns, and it leaves off on a rather ambiguous note!

- Pennsatucky breaks our hearts. Tiffany Doggett has spent the last 2 seasons being our favorite love-to-hate character, but this season finds a kinder and gentler – and more accepting – Penn, thanks in large part to her friendship with Big Boo, which makes what happens to her about halfway through the season all the more devastating.

- Black Cindy finds religion. What starts out as a ruse to get a better deal at meal times ends up as an honest-to-goodness revelation, and it’s amazing to watch.

- We learn more about Leanne Taylor’s background, and it’s a shocker!

- We also learn more about Chang!

- AND we learn about Flaca’s backstory, which culminates in one of THE best episode-ending moments of the entire season!

- Norma is your new (silent) Jesus.

- Sophia gets probably her most difficult material yet. She’s always been on shaky ground at Litchfield, but this season, it all comes to a head when she finds herself on the Hispanic crew’s $#!t list… Laverne Cox kills it, of course. But her status for Season 4 is now up in the air…

- As is both Alex and Nicky’s. The former is last seen in the finale in a rather sticky situation with an old foe, and the latter gets herself in a pickle about halfway through the season that puts her sentence in jeopardy.

So yes, lots to look forward to this year – that’s only the tip of the iceberg! If you haven’t already gotten your binge-watch in, what are you waiting for??

And don't forget to peep our chat with Taystee herself, Danielle Brooks!