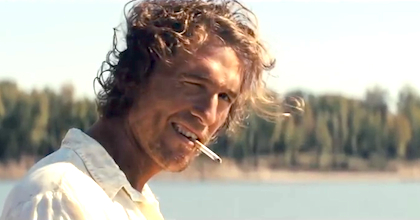 Netflix is a treasure trove of randomness. Sometimes you find something so good it’s good and other times it’s so bad it’s good. Either way, you win. This week for Hidden on Streaming, I watched the Matthew McConaughey movie Mud, and it is awesome!

Why is it awesome? Well, McConaughey plays the title character named Mud. He’s a dude so slimy and dirty that he can only be referred to as wet dirt… but he’s one of the good guys of the movie! The oddest part about Mud, though, is the fact that Mud himself isn’t the main character. A talented young actor named Tye Sheridan plays the part of the main character named Ellis. You may recognize Sheridan’s name as being the new Cyclops in the upcoming X-Men: Apocalypse movie. You may also recognize him from our interview at SXSW a little while back:

Mud follows the story of Ellis as he and his friend Neckbone (you’ll learn in a few seconds why his name is Neckbone) find a boat stuck high in a tree on an island somewhere in the Arkansas River. (They live near the Arkansas River… that should answer why his name is Neckbone.) This discovery of a boat leads them to discover Mud, a drifter on the run from the law, but for what? That’s part of what you will find out if you watch Mud. I can tell you this, though -- whenever I took those tests in school that said what you’re future career would be, mine was always drifter. Well, high school guidance counselor, the joke is on you. Drifters have an Academy Award-winning actor representing them! Alright, alright, alright...

The most interesting part of Mud isn’t just the amazing musical score but the trials and tribulations Ellis goes through because of his parents, an older girl he digs in town, and Mud constantly shaking him down for favors. Ellis has a lot of adult stuff he has to deal with despite being a 14-year-old boy, and he handles them better than most kids his age... but at times handles them like a 14-year-old boy. Can you blame him, though? Maybe you can blame him because you haven’t seen this movie yet… or does that mean he can blame you for not knowing his story? Hmm, sounds like we all have big boy questions to answer here. Go check out today Mud to see if any of those questions and more are answered! But first, you may want to see the trailer (that thumbnail is for the ladies):