HIDDEN ON STREAMING: "The Dragon Prince" 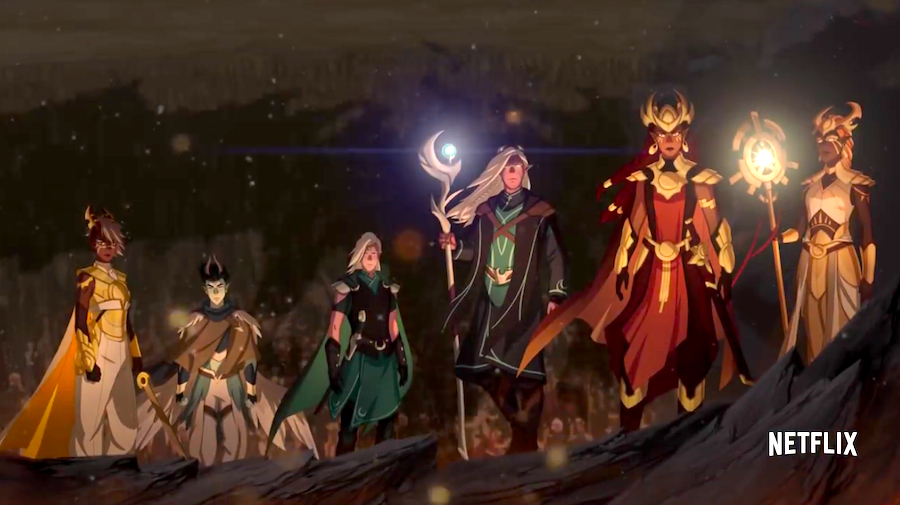 If you’re looking for a new fantasy series that also happens to be family-friendly, look no further than Netflix’s new show “The Dragon Prince”. From the writers and directors of “Avatar: The Last Airbender”, “The Dragon Prince” tells the story of the world of Xadia, where humans and elves fight, divided ever since the humans discovered dark magic and destroyed the dragon king and the egg of the legendary dragon prince. The humans are ruled by King Harrow (Luc Roderique), who has a half son, Callum (Jack De Sena), and a true son, young Prince Ezran (Sasha Rojen).

The lives of the king and his son Ezran are threatened when moonshadow elves plot to assassinate them. Everything changes, however, when Callum, Ezran, and the conflicted moonshadow elf Rayla (Paula Burrows) discover the dragon prince egg, still intact and illuminating in a secret chamber beneath the castle. The three embark on an adventure to return the egg to its mother in order to restore peace between the elves and humans.

One of the most impressive elements of the show is the cast, featuring incredibly talented voice actors who create distinguishable personalities for the characters, establishing sincere comedic and dramatic sides for both the heroes and the villains. The show is abundant with fun banter, and the first season establishes the groundwork for intriguing character arcs. Many viewers will recognize Jack De Sena’s voice, as he played the noble goofball Sokka in the “Avatar” series. The true standout from this first season, though, is Paula Burrows, who demonstrates an incredible range of intensity, humor, and insecurity as the loveable badass Rayla, the moonshadow elf determined to aid the young princes on their quest in hopes to end the war between elves and humans.

Even with such an outstanding voice cast, one character worth spotlighting is one who doesn’t speak at all. General Amaya, who is tasked with protecting the princes, is mute and communicates completely through sign language. She is an admirable, fully realized character, with plenty of personality, and it is terrific seeing that kind of representation in a piece of mainstream entertainment.

The series contains a compelling mythology underlying the core storyline, and most of the world’s significant history is detailed through a clear, direct prologue. Throughout the first season, different forms of mysticism are introduced, from blades so hot they can cut through ordinary weapons, to magic spells used for tracking. The show consistently reveals intriguing components of this fantastical world, while also carrying a constant sense of mystery and discovery, hinting at bigger things to come as more seasons debut. The first season, titled “Moon”, emphasizes the moonshadow elves who can become practically invisible in strong moonlight, so future seasons will surely introduce more elves who draw from other elemental sources.

Perhaps the only complaint some may have for the show is that the villain’s ambiguous motivations can be perceived as shallow or uninteresting. That, and the fact that the first season is only 9 episodes. Hopefully audiences don’t have to wait too long for a second season!

The animation features a unique art style, one that incorporates hand-drawn and computer-generated animation. The small dose of this animation from the trailer may throw some viewers off, but seeing it flow with the narrative demonstrates a fluidity and beauty that enhances the show’s imagery and action.

The animation is a product of the production company Wonderstorm, which was founded by Aaron Ehasz, Justin Richmond, and Justin Santistevan. Ehasz worked on “Avatar: The Last Aribender” as the head writer and director, while Richmond directed the video game Uncharted 3: Drake’s Deception and Santistevan spent time working on League of Legends. Ehasz also recruited the help of Giancarlo Volpe, who directed several episodes from “The Last Airbender” and “The Clone Wars” and directed the first 3 episodes of “The Dragon Prince”.

The show already has a video game in development, one that doesn’t follow the central characters, but still takes place in the world of Xadia. The universe the show has created is certainly brimming with potential, and it will be exciting to see the story continue!

The entire first season of “The Dragon Prince” is now available to stream on Netflix.