HIDDEN ON STREAMING: "Strangers With Candy" 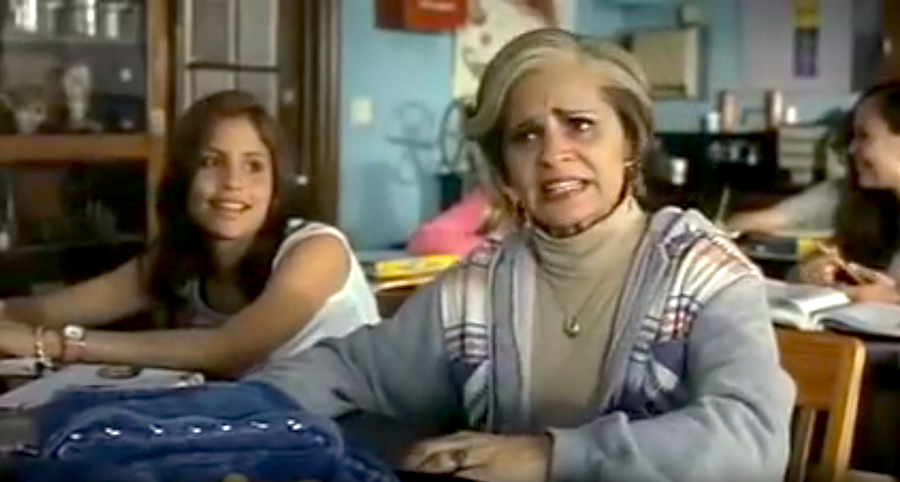 Stephen Colbert may only be in the beginning of his second year as host of “The Late Show” but it doesn’t mean we can’t take a fond look back at one of his early Comedy Central ventures. No, this isn’t going to be about “The Daily Show” and it certainly won’t be about “The Colbert Report”. Today we will be looking at a long lost Comedy Central gem streaming on Hulu at this very moment called “Strangers with Candy”.

Created by and starring Colbert and his Second City buddies Paul Dinello and Amy Sedaris, the show debuted in 1999 and only lasted for 3 seasons, culminating in 30 total episodes. It was a completely dark and surreal satire of the after-school specials of the '70s and '80s, as well as the real-life story of high school drop-out-turned-heroin-addicted prostitute Florrie Fisher, who, after living that kind of life, went around to high schools as a motivational speaker to talk about how she went bad. (The one that came to my school had a catchphrase of “WHAT A DAD!” and got arrested for drunk-driving two weeks after visiting us.) Her speech has been featured in the public service video The Trip Back, and after the Second City trio saw it, they thought, what if this woman actually tried going back to school? Thus the story of Jerri Blank (played by Sedaris), the ex-con, ex-junkie, ex-prostitute, now-freshman at Flatpoint High began.

“Strangers with Candy” is a bizarre show. Even if you take out the fact that a 46-year-old with a terrible past decides it’s time to go back to high school, all of the events in this show are quite absurd because of its overall tone. It hits all those after-school specials and Very Special Episodes of teen dramas like “Dawson’s Creek” (or whatever the kids are watching these days… “The OC”? Is that still a thing?) on the head and completely tears them apart with the show’s whacked out humor. It also features Colbert as a teacher in a secret gay relationship with a fellow teacher, played by Dinello.

Jerri’s homelife is also the subject of oddities. For example, her father never speaks. He doesn’t even move on camera. He’s kind of like those statues in “Doctor Who” that, if you blink, they’ll kill you, but with cameras. She also has a stepmom of a similar age to her who hates her, and as a result has a half-brother she’s in school with who happens to be a popular kid and the high school quarterback. Then there’s the meat deliveryman that comes to their house. He has an affair with Jerri’s stepmom, unknown to his children, Chuck and Patty.

As with many shows, you will most likely start off with the pilot, which I personally hold in high esteem. A lot of time, pilots are clunky. That’s the name of the game because of all the set-up and character exposition that shows feel the need to spit at you all at once. (“But Sarah, you can’t start managing a fast food restaurant with your ex-husband’s aunt. You were an astrophysicist major before you dropped out of Harvard and Yale. Not to mention that book you’ve been working on. You still have a deadline to finish that by the start of the summer!”) After the pilot, there are a few additions to the shows, like the inclusion of a new high school-aged friend for Jerri played by that red-haired actress you’ve seen in everything named Maria Thayer. Plus, of course, the secret homosexual affair Colbert gets in later through character development. (I don’t know why, but seeing where Colbert is today it makes me laugh more that he got his start in this bizarre show and made out with a good friend of his for it.)

Not much else changes in the show, however. Colbert and crew got as close to perfect as they wanted to the first time around. The episode basically deals with Jerri’s issues of not fitting in and using the advice of what she knows -- which is making drugs that’ll make people trip completely out of their skulls, so she uses that to her advantage. It also shows how they will continue to twist the message of the after-school special from here on out.

If we really wanted to, though, I could write a book on the genius of the show, but I'd rather keep it short so you can take a look and make up your mind for yourself. Just like when it originally aired, this show isn’t for everybody, but I think it’s for more people today than it was when it first aired in 1999. Even if it’s not your cup of tea but you’re still a fan of Colbert, it’ll be a fun look for you to see the guy over 15 years ago in one of his first on-screen works. So, either fire up that Hulu account of yours or make a friend with somebody who has one and check out “Strangers with Candy” today!

But first, check out the trailer for the 2005 movie to get an idea!