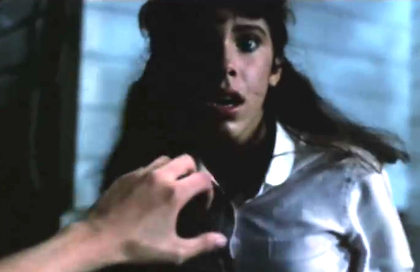 The '80s were known for a lot of things, like day-glo bike shorts, crimped hair, and slasher flicks. And there’s no slasher flick that encapsulates this bizarre decade better then Sleepaway Camp, which is so good that it has it’s own YouTube channel where you can watch the entire movie for free!

Why should you watch it? For one thing, it has one crazy twist ending that even M. Night Shyamalan couldn’t see coming. It also may have set the trend of adult actors playing teenagers. To top if off, one of my favorite movies of all time, Wet Hot American Summer, directly parodies Sleepaway Camp. Take out the slasher and rapey aspects of Sleepaway Camp, and you pretty much have Wet Hot American Summer. Things like the actors being way too old, the actual campers being the right age, the cheesy styles, the camp setting, and even Wet Hot’s own Ken Marino has said that he based his character on a Jewish-looking body builder type of guy from Sleepaway Camp.

So, what is this movie about anyway? It follows a young girl named Angela, who lives with her Aunt Martha and her cousin Ricky after a traumatic and fatal accident in her childhood. It’s been eight years since the accident and the first time Angela goes to camp, which doesn’t quite make sense since she was probably living with Aunt Martha and Ricky for eight years. They get to camp, and Ricky kind of runs things despite being a kid. One of my favorite lines in the movie is when an older kid tells Ricky to “eat $#!t and die.” Ricky cleverly fires back with “Eat $#! and live.” And his ex-girlfriend is the toast of the camp because she grew boobs. That is just some of the great stuff you will see in Sleepaway Camp.

I will warn you this is a very creepy movie and there will be plenty of times that you will sit there and say, “This is part of the movie that doesn’t make any sense.” When the kids all arrive to the camp, there is a chef who pretty much admits to everybody around him that he is a pedophile, and they just laugh it off. (One of those people laughing it off is James Earl Jones’s dad, Robert Earl Jones. He’s Darth Vadar’s dad!!!) And the murderer is a mystery. Every time a murder happens, you see it from the killer’s P.O.V., followed by the victim saying, “Oh, it’s you.” So, strap yourself in for a night of terror and intrigue by watching Sleepaway Campat this link today!

But if you need a trailer… here it is!

And speaking of trailers, here is the just-released trailer for the Netflix reboot "Wet Hot American Summer: First Day of Camp"!