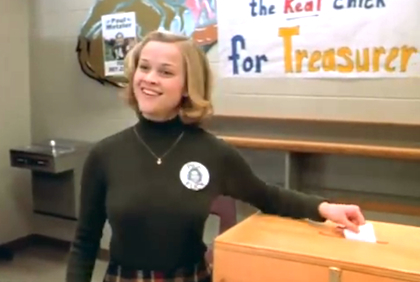 The late-'90s… what a strange time for movies and what an even stranger time in the career of Matthew Broderick. He married =Sarah Jessica Parker and starred in such movies as Inspector Gadget and Godzilla, but one flick I bet you might not remember was Election withReese Witherspoon. Sounds interesting? If not check, out the trailer. If so, check out the trailer:

Election was one of the first movies made by MTV Films, the folks that brought us Beavis and Butthead Do America,Zoolander, Napoleon Dynamite, and, oddly enough,Hustle and Flow. Election follows the story of four people involved in the election of a high school class president: (1) Broderick as high school teacher Jim McAllister; (2) Witherspoon as over achieving student Tracy Flick (think Leslie Knope in high school); (3) Chris Klein as the surprisingly not douchey BMOC jock Paul Metzler; and (4)Jessica Campbell as Paul’s younger, rebellious, and closeted sister Tammy Metzler. Why should you watch a movie about a high school election? I already listed the cast, is that not enough to entice you?? Okay, how about this:

The Stakes Have Never Been Higher: It might seem like just another high school election but the stakes have never higher! Everybody involved has a reason to win and sabotage the competition, except maybe Paul. Tracy is an overachiever who wants to have the title of Class President on her resume to help her get into a great college. She recently had an affair with a teacher in the school (and Jim’s friend), resulting in the teacher being fired and divorced. Jim hates everything about Tracy and wants to sabatoge her. He must stop her from someday possibly running the country. It’s a dark and petty scheme by a grown man over a young girl, even if she is, granted, kind of a sociopath. Jim uses Paul, who was sidelined from football due to a skiing injury, to try and get the kids to vote for the popular kid. Paul is also unknowingly shacking up with his sister Tammy’s secret lesbian lover Lisa, who brushes off her relationship with Tammy as just “experimenting”. Tammy enters the election to get back at Paul and show Lisa she’s better than them. Got all that?

It Parallels a Real Election: Election is based on a novel of the same name by Tom Perrotta, based on events surrounging the 1992 GeorgeBush vs. Bill Clinton election campaign, with Bush being the hardworking but unpopular Tracy and Clinton being the much-loved and kind-hearted Paul. Just likeRoss Perot entered the election as a strong third party candidate out of nowhere, Tammy enters and causes a stir. There is also word that a real high school election of a pregnant student being elected for homecoming queen. Apparently, the school in Wisonsin she went to burned ballots to cover up the fact that they announced a different winner. I always thought high school teachers and administrators were ruthless dastardly villains, and now, as a contributing member of society, I finally get the proof that vindicates my 15-year-old self.

It Hits Close to Home: We all sat through those assemblies where people would get up to the podium and promise insane things they couldn’t possibly deliver, like cheaper rates at the vending machines, Taco Tuesdays, naptimes, parking for Juniors, bringing back the smoking sections, adding a movie theater… you get the picture. Did any of these things actually get done? Hell no. Never. I still had to pay $2.50 for a pack of Reese’s Pieces. Guess if you want to get into politics, you’ve got to learn to make fake promises early on. This is just one of the many stupid things some people took seriously in high school that Election touches on. Plus, let’s be honest, these elections are a popularity contest. This isn’t in the movie, but at my school, the kids were required to make campaign videos instead of speeches due to an incident where somebody in my grade shouted their name during an actual candidate’s speech. He then instructed us to put his name down as a write-in candidate. The girl he interrupted was sweet and took this election seriously, but come on... this was the guy that brought beer to every high school party! It was our duty to vote for him!

Matthew Broderick Urinates on Camera: I now realize you might think that he pees on the camera, but I mean there’s a scene where he’s supposed to pee and he actually does it. No, you don’t see his bits, but it’s pretty obvious what he’s doing for real. Broderick also got the role because ofFerris Bueller’s Day Off. The director, Alexander Payne, wanted Broderick because he liked the idea of putting Ferris in the role of an authority figure who tries to undermine a student, but also, at the same time, the students respect him.

So, if you’re looking for some high school nostalgia, looking to get into the upcoming presidential election early, or just want something funny to watch, check out Election on Netflix while it’s there. They cycle this flick out and then bring it back a lot, so get on watching it asap!