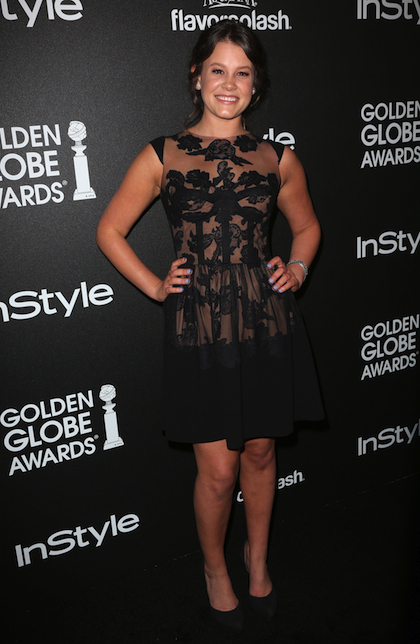 One of the more intriguing traditions during Award Season is the appointing of Miss Golden Globe. This young lady is tasked with handing out the shiny gold hardware to recipents of the Hollywood Foreign Press Association’s good graces, and she happens to be the offspring of other famous entertainers. Many of these gals have gone on to be successful actresses in their own right – some even managed to eventually outshine their parents’ legacy!

The tradition started in 1971 with Anne Archer (perhaps best known as the cuckholded wife in Fatal Attraction), whose parents were TV actor John Archer and Marjorie Lord, best known as the wife in the sitcom “Make Room For Daddy”. But it wasn’t until 1985 that the tradition became a yearly succession. Many acclaimed actresses of today had their “coming out”, so to speak, at the event, including Melanie Griffith (1975), Laura Dern (1982), and Joley Fisher (1992), and more recent starlets like Dakota Johnson (2006) and Rumer Willis (2008). Some fellas have even managed to eke their way onto the stage, like Freddie Prinze Jr. (1996) and Sam Michael Fox (2013), the son of Michael J. Fox and Tracy Pollan.

Clint Eastwood is the proud papa of two past Miss Golden Globes, Kathryn Eastwood (2005) and Francesca Eastwood (2013). Other famous parents whose daughters have been honored include William Shatner, Whoopi Goldberg, Clark Gable, Kevin Costner, and Jack Nicholson. In 2012, Miss Golden Globe was bestowed upon Rainey Qualley, the daughter of actress Andie MacDowell, and we got to tag along with her when she went shoe-shopping for the big event!

Now, it’s another year, and Award Season is again on the horizon, and the 2014 Miss Golden Globe has been announced – the 21-year-old daughter of Golden Globe-winning actors Kevin Bacon and Kyra Sedgwick, Sosie Bacon! Sosie is an aspiring actress (natch) who has appeared in a couple of her parents’ projects already. This honor should do plenty to raise her profile for sure!