Here's What Happened When I Played with Spirits on the Haunted Queen Mary Ship! 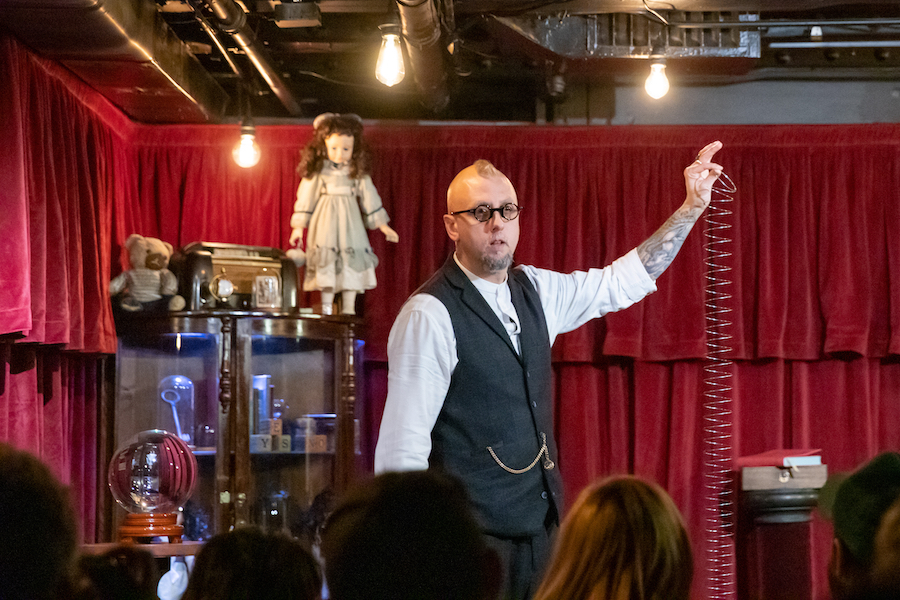 Ghost lovers, paranormal activity seekers, and all-around spiritual believers, this article is for you!

Even if you don’t fall into the categories above, please keep reading because I LEGIT played with ghosts on the Queen Mary. Seriously, I have proof.

Paranormal Illusionist and Apparitionist Aiden Sinclair (seen on "America’s Got Talent" and "Penn & Teller: Fool Us") gave me an opportunity to attend his show, "Illusions of the Passed", which is essentially a theatrical séance. So. Fricken. Cool. It’s 90 minutes long and audience interactive, and ghosts come out to play! It’s a different show every single night, because Aiden is working with the spirits directly, and spirits’ participation is influenced by the energy of the room.

When I walked in, Aiden was sitting in the middle of the stage with his eyes covered. He was in a hypnotic state, I assume to channel the spirits and get his energy right. When he took the cloth off, he welcomed us to the show and began telling us about a little girl ghost named Jackie. [*chills*]

To see who was open enough to the idea of Jackie, and to see who could actually connect with her, Aiden had us close our eyes and see what messages we could get from her. He had Jackie send us a temperature, a color, a sound, and shapes. The room was silent as we all tried to pick up on her messages and my heart was POUNDING. No joke, at one point I thought I was going to pass out!

My friends and I got different messages right, but we ALL got the shapes she sent us. She sent us a triangle within a circle, and as Aiden confirmed it, I gasped SO loud. I swear, as soon as he was like, “She’s sending you two shapes, one within the other,” I immediately got the image of the above in my head. My friends all got that message right too, and Aiden was like, “From the responses I just heard, I think it’s safe to say some of you have connected with Jackie.” Here we GO.

Check out the video below where Jackie and I play!

Calling all ghost lovers! Paranormal Illusionist@aidensinmagickinvited me to play with Jackie, a little girl ghost on the historic@TheQueenMary? Stay tuned for my article where I break down the entire haunting experience and check them out in the meantime x pic.twitter.com/N4IVJkRIUI

Another audience member came up and did it with me, and it was SO mind-blowing. Some of you are going to think things like, “The key started turning because your fingers let it happen,” or “Gravity made it fall,” but I SWEAR on all things that I felt Jackie turn that key. If you look at my face throughout the demonstration, I start to smile. Jackie was making me laugh! Call me crazy if you want, but I could actually feel her. She wanted to turn the key and play with us. So pure. 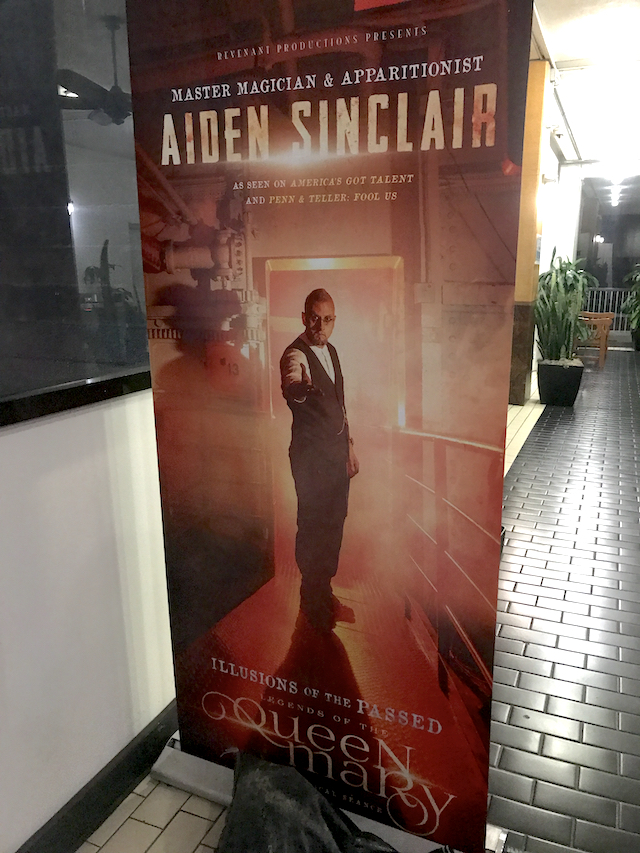 Throughout the show, Aiden told us stories about other ghosts who chill on the ship, which also serves as a hotel full-time, including a lady in white who everyone claims is the most beautiful woman they’ve ever seen. He said that when people see these spirits, they ACTUALLY see them and think they’re real people. When they try to talk to them, the spirits just walk away. SO WILD.

Would also like to mention that, before walking into the show, I slipped in the hallway. It was kinda like my shoe slipped or my leg gave out or something. It was odd, and no, it wasn’t because I had too much wine (you’ll get to that part of the article later). Through Aiden’s stories, I found out a woman slipped and fell there, and later passed away, and hotel guests describe a similar experience in the same spot. [*shifty eyes*]

They hand out tarot cards as drink and seat tickets, and as you hand them to the bartender, you get a tarot message! I’m obsessed with tarot cards, so this made me squeal with excitement. My card was the 4 of Cups, and the bartender told me I “need to take a social break”. Ha! I mean, she’s not wrong. I work a ton and probably deserve a nap or 10, ya feel me? 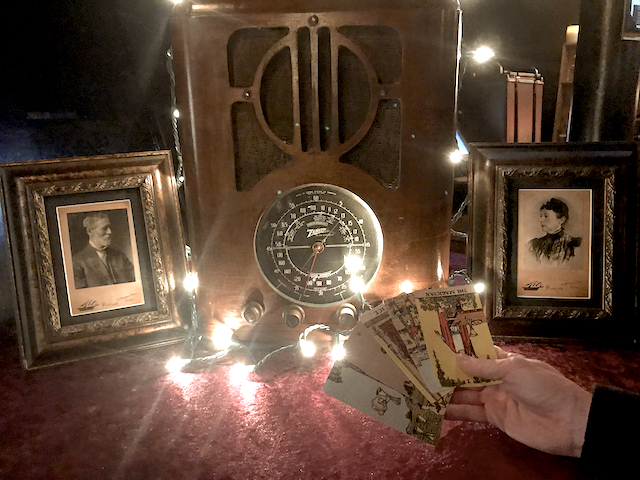 Rewinding a bit before the show, I got to have an exquisite dinner at their classy restaurant Sir Winston’s! Fit for a King and Queen (seriously), anyone who dines here gets a 5-star experience. Most tables get a gorgeous view of the ocean and you legit feel like you’re royalty.

We started with an amazing red wine, bread and butter, and salad. I’m not a big meat-eater but opted for the Beef Wellington with truffles, which was SO good. My friends got the Surf and Turf special, which looked INCREDIBLE, and we ended with a chocolate cake and chocolate-covered strawberries. Pictures below to make your mouth water. Cheers, Chef. 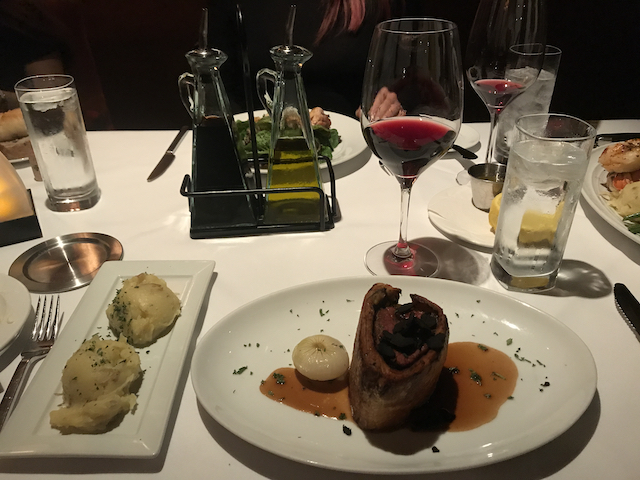 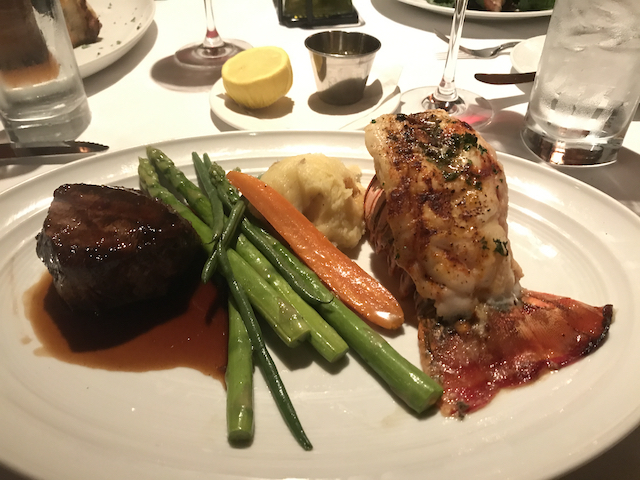 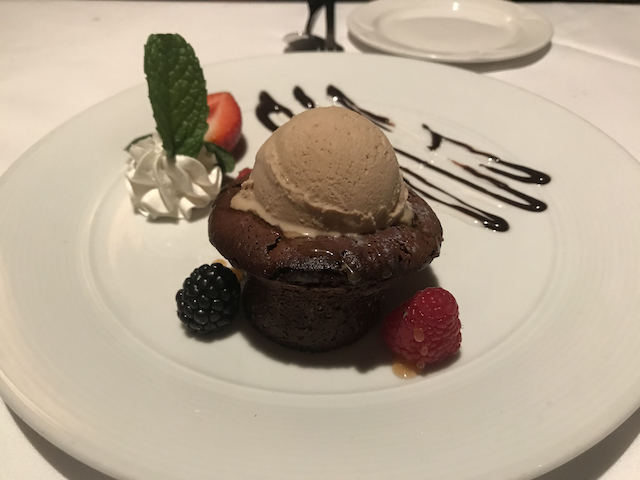 Overall, it was a SPOOKY AF and super memorable night. You guys HAVE to check this show out if you’re in the area.

They also offer night investigations on the ship, where you essentially go looking for spirits and see what you find. Best believe I’ll be back for that. Scary? Yes. Worth it? HELL YES. Just sage yourself after you leave the ship and you’ll be fine.

If you can’t get enough, don’t even trip because I got all the socials for ya right here:

Illusions of the Passed / @illusionsofthepassed