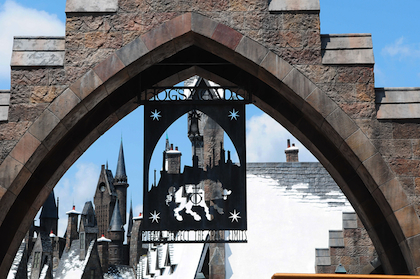 For all of us Potterheads scraping for any new morsels of news related to the Harry Potter universe to ease our withdrawals since the last movie graced our screens 2.5 years ago, I’m about to whip up a Hogwarts speedball for y’all…

First up, Fantastic Beasts and Where to Find Them. As we previously reported, the spin-off book about author and adventurer Newt Scamander, which takes place before the events of the Harry Potter stories, is set to become another film franchise, adapted by J.K. Rowling herself, based on the “textbook” that Scamander “wrote”. The story will take place roughly 70 years before Harry Potter’s birth, not in England but in New York! (Yay, some American magic!) Warner Bros. has just announced that the first film in the planned trilogy will open in theatres on November 18, 2016. This keeps with the tradition of Harry Potter flicks being released around the holidays. It also gives you less than three years to read the book, so get to it!

In other news, we also recently told you about a play set to open in the U.K. that would explore Harry’s early years, before he received that fateful letter from Hogwarts. Rowling was set to co-produce. Now we are hearing that the play will focus more heavily on Harry’s parents as opposed to Harry himself, which is DEFINITELY an exciting prospect, though it does leave one wondering how the story of a magical couple could be pulled off in a theatre setting – CGI isn’t as effective on a live stage, ya know. No date has been set yet; in fact, there’s still no script nor a director, but we do know that it will premiere in London’s West End, so it’s sure to be a big deal no matter what.

Elsewhere, Rowling is keeping busy ghost-writing for Ginny Potter (neé Weasley) on her website Pottermore, where “Ginny” has been posting updates from the 427th Quidditch World Cup. Ginny, who spent some time as a Quidditch player herself, has since hung up her broom in order to become a sports analyst for The Daily Prophet. Her posts thus far include some, um, mishaps involving team mascots and even some quick quotes from Rolf Scamander – the grandson of Fantastic Beasts author Newt Scamander. Ahhh, it all comes full circle!

Finally, for you Muggles out there who desire a more hands-on experience, Universal Studio Orlando is just about ready to roll-out their Wizarding World of Harry Potter expansion, which will feature a walkable Diagon Alley and a new attraction called “Harry Potter and the Escape from Gringotts”… Uhhh, enough said? The interior of the ride will boast a recreation of the famous Gringotts bank, goblins and all! And the best part – film stars Daniel Radcliffe, Emma Watson, and Rupert Grint have been summoned to don their wizard’s robes once more to film scenes that will be included in the ride! We will reportedly also encounter the likes of Bellatrix Lestrange and the big bad himself, Voldemort! Check out the sneak peek below:

I actually got to visit the Wizarding World of Harry Potter during a trip to Orlando last October, and I have to say, the attractions that exist NOW are so out-of-this-world, I couldn’t imagine anything being able to top it, but it looks like these new attractions will do just that! ARG, now I have to go back!!!

And that concludes your Harry Potter updates for today. Which piece of news are YOU most excited about?