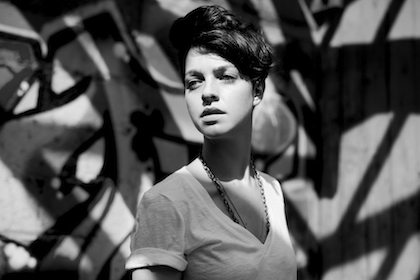 If you haven’t heard of Sinclair, you’re in for a treat!

We are seriously super excited about her music, and that’s probably an understatement. If you like Tegan & Sara, you’ll love Sinclair. Her soft yet strong vocals and alternative/pop sound make for funky and refreshing music. Her EP is currently on repeat as I type this. Yes, it’s really that good!

Nashville-based singer-songwriter Sinclair is making her mark in the music industry, and has just released her debut EP "Sweet Talk" on SoundCloud via independent label Drive Music LLC. “Sweet Talk” was produced by Grammy-nominated producer John Alagia (who has worked with the likes of John Mayer, Ben Folds, Dave Matthews, and Jason Mraz) and platinum-selling songwriter/producer Nolan Sipe (who has worked with Natasha Bedingfield, Jonas Brothers, Colbie Caillat, and Andy Grammer)... No big deal, right?

Check out her album trailer below, which is premiering EXCLUSIVELY right here on YH!

And here's Sinclair performing "Heaven On Earth" unplugged at The Village recording studios:

This girl’s talent comes from an inspiring backstory. Sinclair was born in upstate New York and has earned many local and national awards for her competitive classical guitar talent. Her career really began after she revealed to her pastor father and eight siblings that she was a lesbian -- they suddenly became at odds with her. Because of this sudden disconnection from her family, she packed her bags and moved to Nashville to chase her dreams of being a professional musician. Clearly, this has worked out for her so far, considering Sinclair has since toured with musicians Ingrid Michaelson and Graham Colton. She also recently performed at L.A.’s Hotel Cafe, which features the biggest singer-songwriter talent that Hollywood has to offer!

Sinclair’s story is one of self-discovery, struggle, and acceptance. She is an example of overcoming the odds and walking your own path!

Keep your eye out for this one, you won’t regret it!