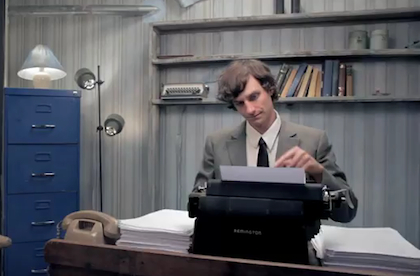 From the fellow who brought you the viral hit “Somebody That I Used to Know” (featuringKimbra), Gotye has returned with a new music video and a catchy tune.
Off his albumMaking Mirrors, “Easy Way Out” is another great track reminiscent of mid-‘80s pop-rock but with a contemporary Euro-hipster spin. Belgian-born Aussie Gotye (born Wouter De Backer and known to his friends as “Wally”) has a plethora of musical influences to draw from to create his experimental sound. Add another one to iTunes library!
The music video reflects the same artistic flair that Gotye displayed in his previous clip withKimbra. In it, a 360-degree camera follows the singer as he repeats the same routine, day in and day out, until he becomes so numb and fed up with the world that he allows his apartment to literally go up in flames. Is this the “Easy Way Out” he’s been looking for? Hmmm... Oh, that enigmatic Gotye!
And in case you’re wondering, yes, he is naked in this one too.
Check out “Easy Way Out” below!
(Image via gotyemusic/YouTube)
- KatieMarzullo,YH Staff Editor
[email protected]