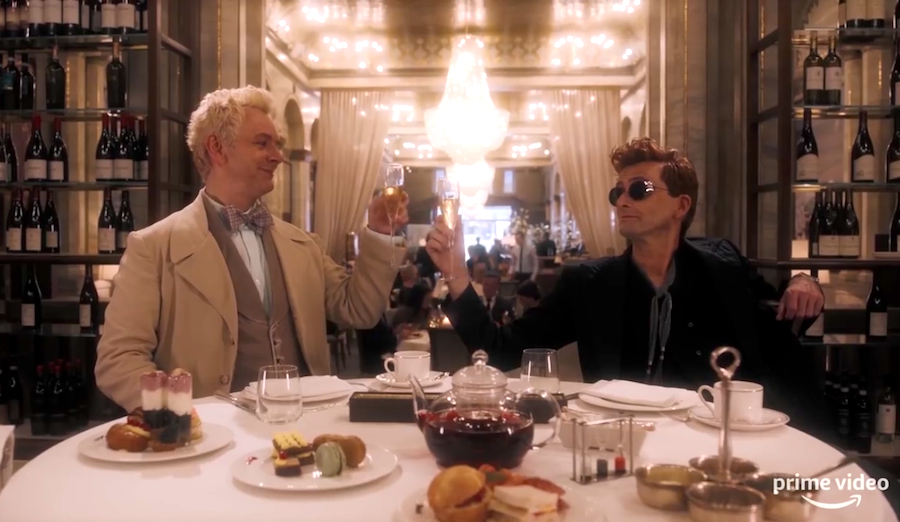 Amazon is doing seriously great stuff with television and movies recently. To think at one point this is where you would order your sunscreen and college textbooks, and now it has become a content-generating machine. Anything is possible, and as a badass Prime member, you get to enjoy all the possibilities they have to offer and all the great things on the way. The next series to come from the streaming powerhouse will hopefully continue the trend of success it has recently grown accustomed to.

The show’s trailer has everyone buzzing and gives us a glimpse at the apocalyptic comedy based on the beloved acclaimed novel that could only come from the twisted minds of a couple of iconic scribes like Neil Gaiman and Terry Pratchett. Now I just heard of “Good Omens”, but being a huge fan of “American Gods” on Starz, which is another Gaiman project, I can say this preview has definitely caught my attention.

Based on the best-selling novel of the same name, “Good Omens” follows the story of Aziraphale, an angel, and Crowley, a demon, who have formed somewhat of a friendship spanning 6,000 years. The two immortal beings have grown fond of life on Earth and the luxuries that accompany it. This devilishly divine dynamic duo will have to find a way to work together to overcome the odds stacked against them when they go up against the Antichrist to stop the impending Apocalypse. The series that will have the worlds of Heaven and Hell colliding stars David Tennant and Michael Sheen. The cast also includes the talented Adria Ajourna from NBC’s short-lived “Emerald City” and “Parks and Recreation” all-star Nick Offerman. Also, Jon Hamm makes an appearance as an archangel named Gabriel, because yeah, that’s how he rolls.

Everyone can relate to having that one friend that is all kinds of a bad influence and the one that is so goody-two-shoes that it irks you to your core. Instead of having to deal with either, audiences can enjoy their odd couple antics on a much grander scale in what promises to be the most interesting story about stopping the end of the world you’ll probably ever see. Between this and the fact that people everywhere can’t stop talking about the trailer, it all seems to point to this series being a ‘”Good Omen” for Amazon and its viewers.

The end is nigh when “Good Omens” premieres on Amazon Prime in 2019!