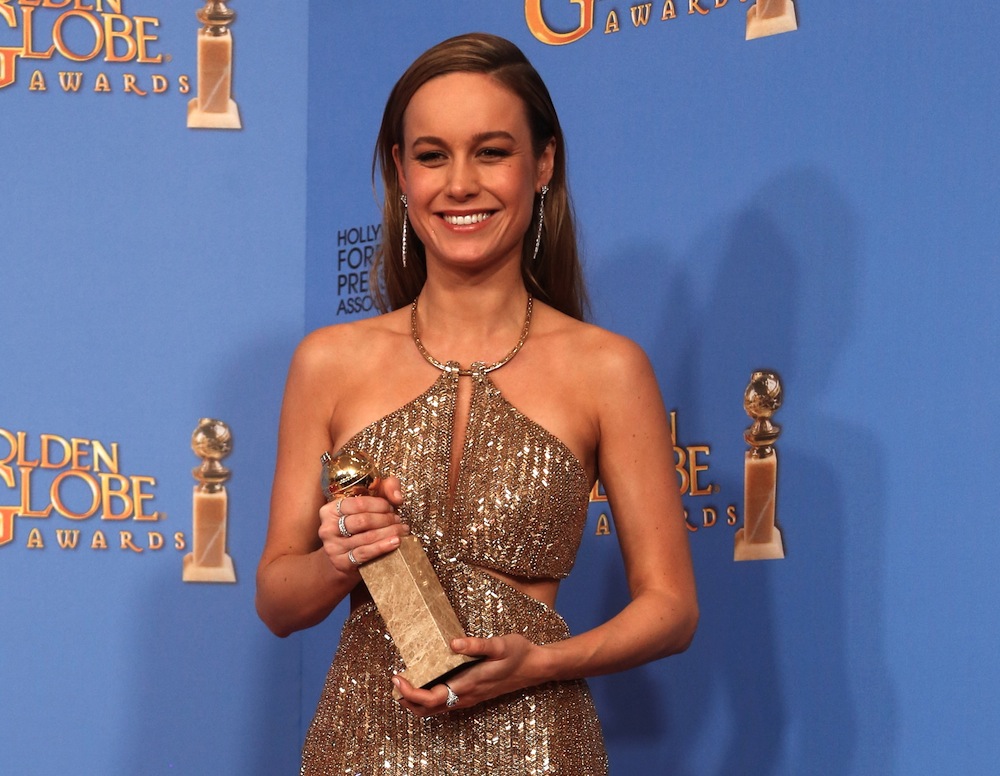 “Gee, I’m happy for [winner], but I was really rooting for [nominee].”

That was common refrain in my head last night during the 73rd annual Golden Globe awards, and indeed the evening was all about upsets, comebacks, and redemption, and there were very few winners that I wasn’t genuinely excited for.

Let’s break it down, shall we?

Guys, remember when I kept saying that poor Leo DiCaprio will probably have to continue to wait for that long-coveted Oscar due in large part of Bryan Cranston’s almost-guaranteed nomination and win for Trumbo? Well… if last night was any indication, this might be Leo’s big year after all!

The actor took home the trophy for Best Actor in a Film Drama for The Revenant (his third career Globe), and he was joined in victory by director Alejandro González Iñárritu and the film itself won Best Drama Film, pushing all three firmly into Oscar Frontrunner territory.

Meanwhile, Brie Larson certainly heightened her odds by winning Best Actress in a Film Drama for her much-lauded performance in Room, beating out both Carol stars Cate Blanchett and Rooney Mara.

The Best Comedy or Musical Film categories left many a head being scratched as the nominees that were actually intentional funny walked away empty-handed, going instead to Matt Damon for The Martian (???), Jennifer Lawrence for Joy (really?), and The Martian for Best Film (WTH???). I had no idea The Martian was such a side-splitter, y’all!

Lots of dialogue-heavy films were (naturally) nominated for Best Screenplay, but in the end, the master himself, Aaron Sorkin, reigned supreme.

One of the first big comebacks of the night involved Sylvester Stallone taking home the Best Supporting Actor trophy for his reprisal as Rocky Balboa in Creed. The character, created by Stallone 40 years ago, has been somewhat of a good luck charm for him – he won his first (and, thus far, only) Best Actor Oscar for the role back in 1977.

To the surprise of no one except Kate Winslet, Kate Winslet won for Best Supporting Actress in Steve Jobs and looked as shocked as a doe-eyed starlet winning her first award for anything ever and not, you know, an already 2-time Globes winner and Oscar winner. Come on, Kate, you’re not fooling anyone! Own your amazingness!

The incomparable Ennio Morricone was honored for Best Original Score for The Hateful Eight, which was accepted by writer/director Quentin Tarantino… which, let’s face it, he would do for ANY award this film wins, no matter what the category even if the winner was in attendance.

The big winners of the evening were newbies “Mozart in the Jungle” and “Mr. Robot”, for Best Comedy Series and Best Drama Series, respectively, also collecting trophies for stars Gael Garcia Bernal and Christian Slater. All told, these upstart shows and their veteran actors beat out the likes of “Empire”, “Game of Thrones”, Jeffrey Tambor, Patrick Stewart, “Orange is the New Black”, and “Veep”. Pretty impressive, no?

In that same vein, Rachel Bloom brought the house down when she was named Best Actress in a Comedy Series over the heavy-hitting likes of Julia Louis-Dreyfus, Jamie Lee Curtis, Gina Rodriguez, and Lily Tomlin, and Maura Tierney made her own big TV comeback by winning Best Supporting Actress, beating out Uzo Aduba, Regina King, Judith Light, and last year’s winner Joanne Froggatt.

Jon Hamm got the evening’s sentimentality award, taking home what will be his last ever Golden Globe for his role as Don Draper in “Mad Men” (he first won it in 2008). And in a moment nobody saw coming (especially Leo DiCaprio – too soon??), Lady Gaga received the Globe for Best Actress in a Miniseries or TV Movie for her role in “American Horror Story: Hotel”, beating out frontrunner Kirsten Dunst  (“Fargo”).

And last but CERTAINLY NOT LEAST, Cookie reigned supreme as Taraji P. Henson slayed the competition by winning Best Actress in a Drama Series for her fierce performance as Cookie Lyon in "Empire", upsetting faves Viola Davis and Robin Wright.

All in all, I can’t say I have many complaints about this list of winners. I think most, if not all, were very well-deserving, and I can’t wait to see how this plays out come the Oscar nominations next week! Stay tuned!