Get Ready for "Late Night With Seth Meyers" 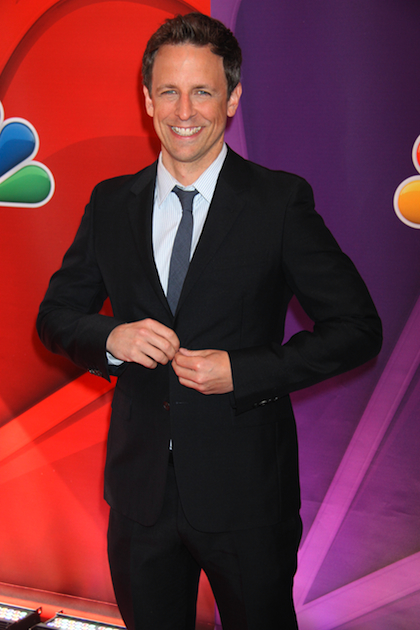 Yep, it’s time for Seth Myers to bid goodbye to “SNL” and head to an even later gig. The “SNL” veteran has inked a deal to succeedJimmy Fallon as host of NBC's "Late Night", while Fallon move up into Jay Leno’s spot on "The Tonight Show". Lorne Michaels will executive produce both shows, while Michael Shoemaker will remain with the "Late Night" show as producer.

Fallon will take over for Leno’s in February 2014 (following the Winter Olympics), with Myers most likely stepping into his new role at that time as well. But never fear, “SNL” fans -- Myers will stay on as the "Weekend Update" head correspondent through the fall. There is a possibility that Myers may write some of his own jokes -- he’s been the Head Writer for “SNL” for the past eight years. Both shows are filmed in NYC.

There is no word yet on what the new show will look like. Could it possibly be simply an expanded version of "Weekend Update", complete with silly jokes and spot-on imitations of celebrities (or, in this case, real ones)? Will it only feature interviews with actors, or will athletes and politicians make appearances too? Could it end up being similar to “The Daily Show”? Only time will tell, but I’m personally excited for it. I love Myers’s goofy, acerbic jokes on "Weekend Update" and the way that he manages to keep a straight face when interacting with the diverse array of guests who drop by (like my favorite, Stephon). I definitely think they will have to make it a bit different from Fallon’s show, but I don’t sense this being too much of a problem considering the two are rather different performers and writers. Either way, I’m just ready to see some fresh faces on late-night TV!

Are you excited to see the new "Late Night" show hosted by Seth Myers?