Get Psyched for the FIFA World Cup! 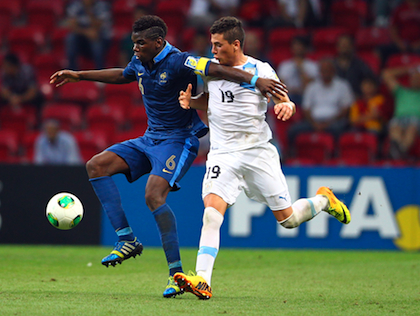 Bust out your vuvuzelas and all your favorite noisemakers because the FIFA World Cup is happening this year in Brazil!

The World Cup stars on June 12, and the first round matches are going to be pretty exciting!

Some of the teams facing off include England vs. Italy, and Germany vs. Portugal. These are match-ups you should definitely look out for!

The World Cup hasn’t even started, but there’s already a huge buzz, particularly regarding the Men’s U.S. National Team and the official roster.

Coach Jurgen Klinsmann announced the 23-player roster and, although Landon Donovan did not make the cut, the U.S. team is looking very strong. The key to their game against a very tough group match up is their goalkeeper, Tim Howard. He is a very experienced player and one of the more involved goalies. And with the talented strikers on the opposing teams, the U.S. will need a strong keeper to keep them in the game. In the group with the U.S. and Ghana is Portugal. Need I really say more? Well, I will, because my love, Cristiano Ronaldo, will be playing for them. He will be the one the U.S. will need to neutralize if we have any hopes of beating the strong Portugal team.

However, our Men’s National Team still has a lot of work to do. Their last game against Azerbaijan was supposed to be an easy win, but it quickly showed the team that the road to the World Cup wouldn’t be so simple. Luckily, they still have a few games to work out some kinks in their chemistry and get out the jitters of being on the National Team. If they can cohesively work together as a unit, the U.S. could be a strong force in the World Cup.

The U.S. Men’s National Team finds itself in a really tough Group G this round with Portugal, Ghana, and Germany, so we’ve got our work cut out for us. The team is going to need all the practice they can get, because once the World Cup starts, I doubt anyone will be giving us mercy.

To get you in the mood, listen to the official FIFA World Cup song by Pitbull and Jennifer Lopez!

For anything and everything FIFA World Cup 2014, check out the official website! Go Team!