Get Psyched for NBA All-Star Weekend! 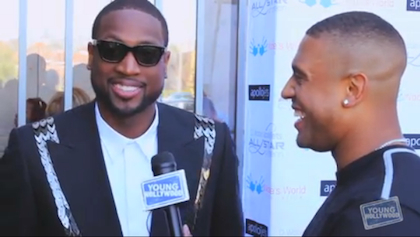 We’re in the NOLA, baby!

Well, at least, that’s where this year’s NBA All-Star Weekend is going to be. It might be Valentine’s Day weekend, but for single me, I’ll be checking out the basketball scene.
All-Star Weekend is all about putting the season stress aside and having a little friendly, competitive fun.
This year, All-Star Weekend starts on Thursday (yesterday) with an All Day Dunk-A-Thon. Then, on Friday (today), Sprint will have their NBA All-Star Celebrity Game featuring Kevin Hart, Nick Cannon, and many others.
On Saturday the real excitement begins with the different skill events, including Sears Shooting Stars, Taco Bell Skills Challenge, Foot Locker Three-Point Contest, and, my personal favorite, the Sprite Slam Dunk.
The Shooting Stars challenge is fun because they team up a current NBA player with a WNBA player and a retired player from the same team area to make shots from different parts of the court, ending with the difficult half-court shot.
The Skills Challenge and the Three-Point Challenge are pretty self-explanatory, but this yearStephen Curry of the Golden State Warriors will be competing in the Three-Point competition. He’s sure to rock that one.
The Slam Dunk competition, however, will include Paul George, John Wall, and other promising players. To get us all into the mood, here’s the 2008 Slam Dunk Contest.
Finally, on Sunday, the All-Star game will commence! The West’s starters are Blake Griffin, Kevin Love, Stephen Curry, Kevin Durant, and Kobe Bryant, who will not be playing due to his injury. The East’s starters are LeBron James, Carmelo Anthony, Paul George, Kyrie Irving, andDwyane Wade.
You can check out more extras, interviews, and videos on the website!
Flashback to last year's festivities with Dwyane Wade and Lamarr Woodley, and don’t forget to check out All-Star Weekend 2014 this weekend!
(Screenshot via YH)
- Amanda Baltazar, YH Staff