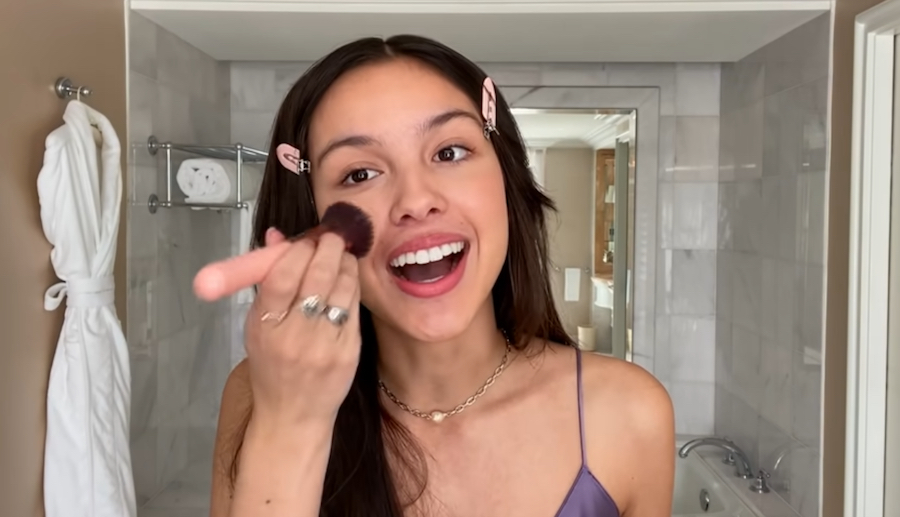 Is there anything this young star can’t do? From starring in Disney+ hit series "High School Musical: The Muscial: The Series” to her first two singles, “driver’s license” and “déjà vu”, going viral all before and while she was 18, Olivia Rodrigo also has us fangirling over her skincare routine. After all, who doesn’t want that effortlessly flawless look? Rodrigo took to Vogue’s Youtube channel to share her secrets.

“I think less is more with skincare a lot of the time,” Rodrigo said in the video. She says she used to use a lot more products, but they only ended up irritating her skin. Now, it’s more about minimalism and relaxation.

The first thing she does is take some vitamins – specifically, two Olly “Undeniable Beauty” gummy vitamins. Rodrigo says she’s been taking these for about a year now and actually seen a difference in her hair, and they taste so good that they’re the “highlight of her morning.”

Next, Rodrigo washes her face with the Epionce milky lotion cleanser. After showing off her super cute pink Glossier make-up bag, she uses an Ordinary serum (which, she likes to put directly on her face, rather than on her hands – “It’s just so much fun to do it like that.”) After rubbing that into her skin, she turns to her pretty purple Gua Sha, which she started using this year.

“It’s really relaxing, sometimes I do it at the end of the day when I take my make-up off,” she said.

Next step: lip scrub -- Another delicious part of Rodrigo’s routine. After letting it sit and wiping it off, Rodrigo makes sure to keep the moisturizing going by applying lip balm. And believe it or not, that’s it! Now it’s onto her everyday make-up routine.

Rodrigo always starts her make-up routine with First Aid Beauty’s “Ultra Repair Tinted Moisturizer” BB cream with SPF 30 – sunscreen is a super important part of her routine and she loves that it’s included in this moisturizer. After that, she applies Glossier’s stretch concealer in the shade G10 under her eyes. So far, it’s true – she looks effortlessly glowy!

She puts on bronzer on her cheeks next for a more “tan and sunkissed” look. She has a birthmark on her right cheek, and she makes sure never to cover it up – she really likes it! Blush comes next, and it’s one of her favorite steps now, though she admits, when she was younger, she didn’t understand why people wore it. “It just makes you look so awake, and happy, or something,” she laughed.

After adding highlighter to the apples of her cheeks, she moves on to filling in her brows. After using a brow pencil, she adds a layer of Glossier’s iconic Boy Brow gel to shape them. A major step up, she says, from using hairspray and a brow brush when she was younger.

“I’m still gaining confidence in how I look,” she said. “And I probably will be for a very long time.”

Next up, Rodrigo uses Glossier’s Pro Tip Liquid Eyeliner to “elongate her eyes” – she says she definitely prefers liquid eyeliner over the latter. She does the wing first, filling in the rest of the eyeliner after. After the lashes have been curled – something which she always does herself – she applies mascara.

“Very recently, I started doing make-up for myself,” she said candidly. “Doing things for yourself is something I think we’re all still learning how to do.” Make-up is one of her favorite things to do, because it helps her feel more confident. “At the root, your beauty routine should just be enjoyment and doing it for your own self-confidence.”

For her lips, she uses Glossier’s Ultra Lip (not yet available to the public), which has hyaluronic acid in it, perfect for that extra hydration. She uses the shade Ember, which she loves because it accentuates her natural lip color rather than covering it up. That’s her make-up!

As an oily-haired girl (we love that she’s just like us), she especially loves dry shampoo. She also loves to add some hair oil at the tips of her hair.

Rodrigo’s self-care routine makes us all want to take a second to relax and try to achieve that effortless glow. “Self-care has become really important to me lately – doing your make-up or doing your skincare or taking a shower and doing your hair – you’re not on your phone, and you’re by yourself, you can really recharge. That’s really important to me.” Take all the time you need, Olivia… We’ll be practicing hopefully as much patience as we wait for your album to come out!