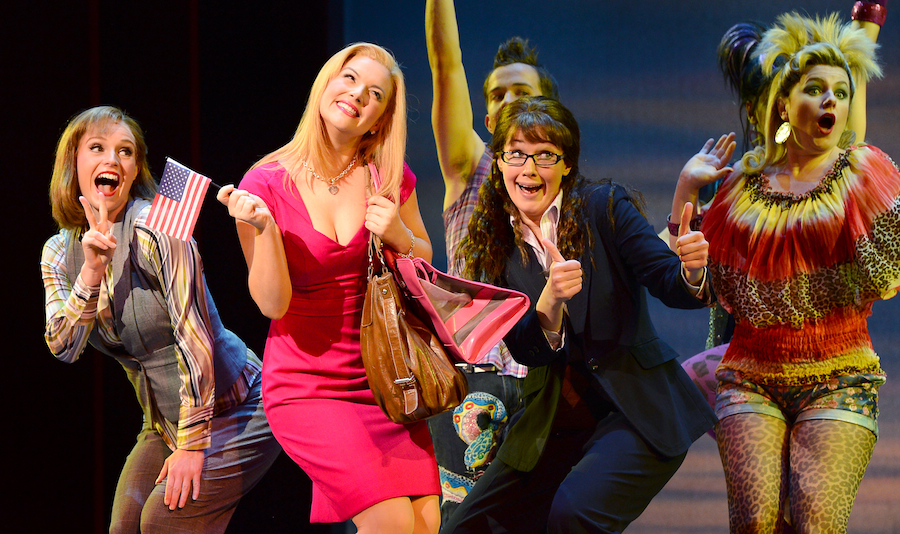 Word is out that Tim Burton classic Beetlejuice (which technically does feature a couple of musical numbers) is not only being made into a Broadway musical but has begun preview showings, which is a typical part of stage shows that are getting ready to premiere but want to test things out and work out some kinks. While that doesn’t exactly mean Beetlejuice: The Musical will be hitting stages any time soon, if ever, it does give us a pretty good idea that it will. Word also has it that another '80s classic, Back To The Future, is currently being adapted to stage as a musical, so it seems that taking beloved movies with little to no musical background is the thing to do these days -- with varying results. But we like to keep things positive around here, so let’s take a look at some successful screen-to-stage shows that have premiered in the past decade or so!

I’ll start with my girlfriend’s favorite. Making its Broadway debut in 2007 (six years after the original film, about a "dumb blonde" archetype sorority girl who begins her law career by somehow getting into Harvard Law School played by Reese Witherspoon, premiered), Legally Blonde made a seamless transition from dialogue-heavy screen to musical stage and continues runs throughout the world today, currently running in the U.K. It was even recorded and broadcast on MTV later in 2007.

With one musical number throughout the original movie and actually premiering three years before Legally Blonde, Spamalot made a lot of headway on Broadway, since turning the classic British comedy Monty Python and the Holy Grail into a musical seemed like a weird choice, especially since, once again, this is the only musical number in the movie and is regarded by King Arthur (played by late Python member Graham Chapman) as too silly to waste time with:

While Spamalot is probably not the first film-to-musical ever put on the Broadway stage, it certainly did lay the groundwork for what has now become the normal thing to do. It’s even backed by some of the comedy group with member John Cleese lending his voice to be the voice of God and was written by member Eric Idle. Some other members (not naming names) thought of it as not their favorite effort but has its moments and are fans of the money they receive from it. The original run also had Tim Curry before his stroke, so as a result the soundtrack features very lively vocals from the actor best known for a musical that went from stage to midnight viewing immortality on screen, Rocky Horror Picture Show.

One of my favorite comedies when I was growing up, and to top it off the musical was written for Broadway in 2007 by the original director/co-writer Mel Brooks. Who better to make a musical version of his comedy classic than the guy who notably cut an over three-hour unwatchable movie down in the editing room to an American treasure that’s less than two hours long? With songs based on famous quotes like “Roll in the Hay” and “He Vas My Boyfriend” to an ensemble cast musical rendition of the film’s famous tap dance scene to “Puttin’ on the Ritz”, it’s no wonder this musical is still enjoying an international run to this day.

(Okay, so that clip may not be Broadway but at least it’s the whole scene!)

This one I’m actually not at all familiar with on screen or on stage, but after the Sara Bareilles-written musical based on an indie film, about an under-fulfilled waitress who feels trapped in a loveless marriage after succumbing to an unwanted pregnancy, hit the stage in 2015, it became a hit. Currently the show is gearing up for a summer run at the Pantages in Los Angeles (the L.A. equivalent to Broadway) and it looks like this show will only get bigger from here.

As I have stated earlier, however, I have not seen this one but heard a lot about it since it’s coming to my town, and it sounds like quite an interesting choice to make into a musical. I’m kind of fascinated to see how somebody can take what sounds like a super depressing plot into a fun night on Broadway. Seems like a tough feat to pull off from the outside in, but Bareilles has apparently done this and made it look easy.

Who doesn’t watch Elf every Christmas season all 10,000 times it’s played on FreeForm? It seemed like it’d only be a wise idea to turn the beloved holiday film into a Broadway musical back in 2010. While Elf: The Musical may not always be running due to the fact that it is a Christmas musical, there is a stop-motion animation version that aired on NBC in 2014 featuring the voices of Kate Micucci, Ed Ansner, Mark Hamill, Fred Armisen, and Jim Parsons as Buddy the Elf, which is also available on DVD and Blu Ray in stores around Christmas and on Amazon, most likely, always.

Okay, this one is definitely not a Broadway musical, but so far it has had three sequels and may or may not have helped launch the career of its star and co-writer Darren Criss, who is best known for his work on Ryan Murphy shows “Glee” and “American Crime Story: The Assassination of Gianni Versace” as real-life serial killer Andrew Cunanan, whom Criss has outlived. Criss co-wrote the first musical with director A.J. Holmes, who has continued his musical career by playing Elder Cunningham in The Book of Mormon on Broadway and other stages, during their college days at University of Michigan, where it was also performed in 2009.

A Very Potter Musical takes its plot from many different Harry Potter books but mainly Sorcerer’s Stone, Goblet of Fire, and The Deathly Hallows and is an absolute treat for Potter fans. While finding live showings may be on the tougher side of things, the folks behind it have uploaded it into many parts on YouTube for your enjoyment. But be warned, sound quality isn’t the best so you may want to watch with subtitles: