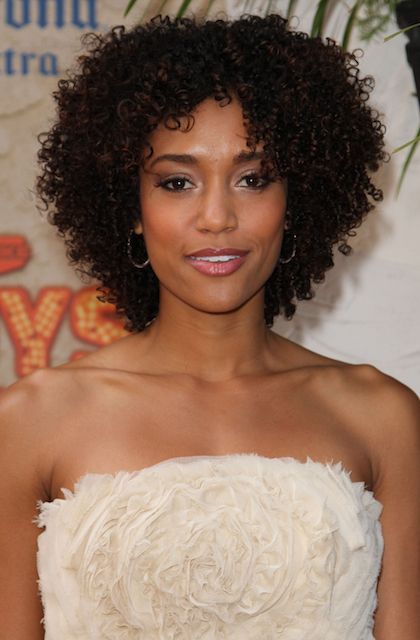 Unless you're a "General Hospital" fan, you probably haven't heard of Annie Ilonzeh, who joins Minka Kelly and Rachael Taylor as the titular trio of ABC's new version of "Charlie's Angels" this fall. But viewers who tune in to the series premiere on Thursday, September 22, will quickly be asking, "Who's that girl?"
Her co-stars, after all, have been fixtures on the Young Hollywood scene for a while now, if not exactly household names yet. Kelly starred on NBC's "Friday Night Lights" and tussled with Leighton Meester in the big-screen thriller The Roommate — and received heavy tabloid coverage for her relationships with John Mayer and Derek Jeter. Taylor, who hails from Australia, turned heads in the first Transformers film and had a recurring role last season on "Grey's Anatomy" (which will follow "Charlie's Angels" on Thursdays) as a love interest for Justin Chambers.
But it was actually Ilonzeh who was cast first out of the three. She plays Kate Prince, a former Miami cop who fell from grace, on the new show, from "Smallville" creators Alfred Gough and Miles Millar. Ilonzeh was born and raised in Texas in the Dallas/Fort Worth area and grew up playing sports like basketball, soccer, and track (which will undoubtedly come in handy for playing the athletic Kate).
Ilonzeh attended the University of Texas at Arlington on a basketball scholarship, but after a visit to Los Angeles in 2006, she decided to give acting a go. She upped and moved to L.A. and began booking small roles in films (she's credited as "Hot Girl" in He's Just Not That Into You) and on TV shows including "Entourage" and "Melrose Place." In 2010, she landed a regular role on the ABC soap "General Hospital" as Maya Ward, a med student and long-lost member of the Quartermaine family. Ilonzeh continued on the show until this past June, after the "Charlie's Angels" pilot was picked up by ABC. Now she's poised for an even bigger breakthrough.
According to her bio, Ilonzeh spends most of her free time in the gym and creates her own routines, incorporating moves from sports such as boxing and mixed martial arts (also helpful, since Kate is described as a martial arts master). Ilonzeh loves Mexican food (in moderation), R&B music, and spending time with her chihuahuas, Capone and Pacino. Her fave movies include The Sound of Music, the original Willy Wonka & the Chocolate Factory, and The Sandlot.
Follow her on Twitter at @annieilonzeh and check out a preview of the show below!
(Image via FayesVision/WENN)
- Andre Chautard, YH Staff