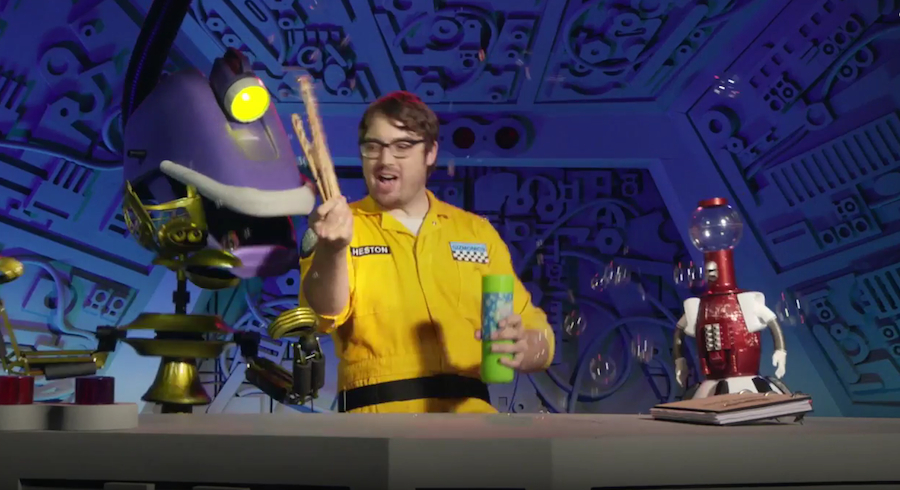 As you probably already know (because I already told you), cult classic TV show “Mystery Science Theater 3000” is coming back, thanks to a mega-successful Kickstarter campaign launched by series creator Joel Hodgson as well as Netflix, the platform that has agreed to carry it. We first brought you the news waaayyyy back in November of 2015 and have kept you updated on the progress, such as casting news and official announcements from the MST3k panel at Comic-Con last summer.

With each new morsel of info that’s come out, old and new MSTies alike have been waiting with bated breath and counting down the days until the April 14 premiere. And now, we have our first trailer and first look at what to expect from the long-awaited Season 11!

The first thing you will no doubt notice is that Joel kept his word when he said the new season would preserve that low-budget, homemade feel, and those quaint, practical effects certainly bear that out! The trailer also gives us some backstory info on how new host Jonah Heston (Jonah Ray) comes to be marooned on the Satellite of Love, like Joel Robinson and Mike Nelson before him. Apparently he is lured to the sinister Moon 13 base by the progeny of OG Mad Scientists Dr. Clayton Forrester and TV’s Frank, Kinga Forrester (Felicia Day) and TV’s Son of TV’s Frank (Patton Oswalt) (where the Mads found time to procreate, and with whom, is anybody’s guess!), who want to revive their fathers’ famous experiment. Thus poor Jonah finds himself stuck watching terrible movies with only his robot sidekicks, Tom Servo (Baron Vaughn) and Crow T. Robot (Hampton Yount), to keep him company. Let the whackiness ensue!

My only complaint about this trailer is that I wish we could see more wisecrackin’ from Tom and Crow. Although seeing the ‘bots levitating themselves to try to see past a barrier blocking a curvy lady’s bits was… okay, kind of disturbing. (Crow’s legs are creepy, man!) But WHATEVER, it looks homespun and whimsical, and I certainly hope it lives up to the hype!