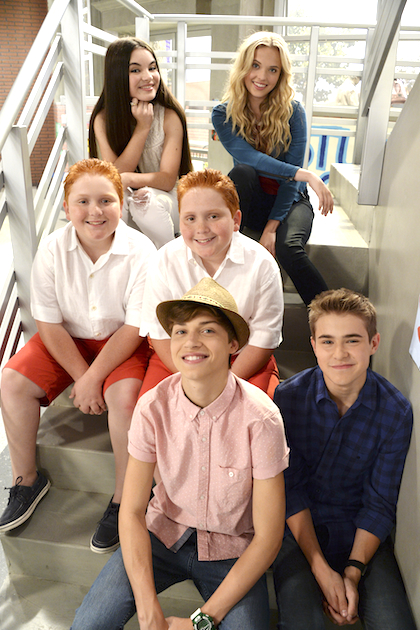 Right here, right now, YH is giving you a first look at the official music video of “Whenever” from the boys of Forever in Your Mind (FIYM) before it premieres on Disney Channel tonight!

FIYM have not only captivated our ears with this memorable sure-to-be hit song, but they have also snagged the opening theme song credits for Disney Channel’s brand new comedy, “Best Friends Whenever.”

The video is filled with sneak peeks into the filming of the series, with behind-the-scenes footage and clips of upcoming episodes. Fans of FIYM will also be pleased to see one the lead singers, Rick Garcia, in the starring role of Naldo in the first ever-televised episode “A Time to Travel”, kicking off at 9:55pm EST, following the premiere of Teen Beach 2!

The show follows two best friends, Shelby (Lauren Taylor) and Cyd (Landry Bender), who realize that they have the power to travel back and forth in time, thanks to the efforts of their friend Barry, who aspires to be a scientist.

Make sure to catch the series regularly when it joins Disney Channel’s Sunday night comedy block on Sunday, July 12! As for now, go straight to iTunes and download FIYM’s “Whenever” TODAY, and stay tuned for YH's exclusive set visit to the show!