First Look at Harry Styles & Emma Corrin In Their 1950s-Set Film 'My Policeman'! 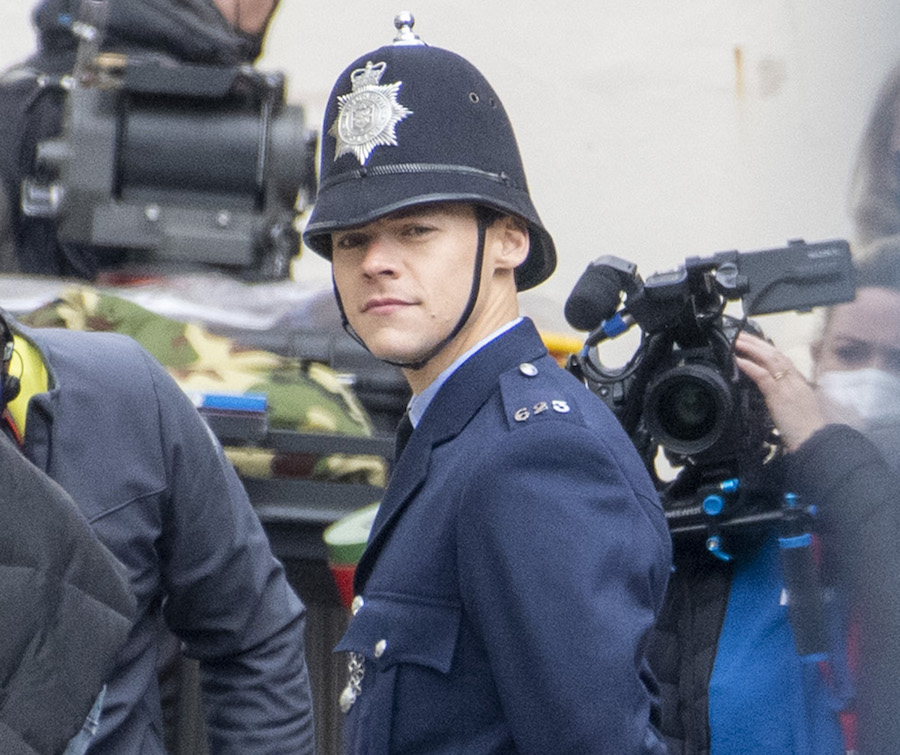 Harry Styles just wrapped his most recent movie, Don’t Worry Darling, opposite Florence Pugh and directed by Olivia Wilde, and immediately went to the set of My Policeman, where he’s starring opposite Golden Globe-winning "The Crown" star Emma Corrin and David Dawson ("The Last Kingdom") and filming in England. Tons of new pictures from the set have been surfacing on social media, and we’re excited about what we’re seeing so far!

Adapted from the book by Bethan Roberts, the movie will be set in the 1950s and 1990s, when lovers Tom (Styles) and Patrick (Dawson) remember their love affair from decades past. Tom is in a love triangle with Marion (Corrin), who he is married to, and Patrick, and he works as a policeman in Brighton. We don’t know much else about the plot, but while we wait for the movie to grace our screens, we can enjoy these pictures from the set, thanks to Twitter user @MypolicemanU who has been meticloulously documenting all the sightings of the cast and crew!

HQs from set. 4th May. pic.twitter.com/8FEyhIS9Hu

Some of the earliest pictures we saw contain Harry in uniform, meeting Patrick in character as Tom.

Next, we got a series of photos at the beach, with Harry in some wonderful '50s-style short shorts and Emma Corrin looking playful in a long yellow skirt and striped top. Supporting actor Joseph Potter was also present as a character named Roy.

Harry and Emma getting stuck in the boat! pic.twitter.com/eRPiBvhnfS

As we know, Harry and Emma share a stylist (Harry Lambert) and a friendship (he watched her dog for her!), so it’s a delight to see them having fun together off-camera, like in these series of pictures, where they’re lounging on a boat between takes.

Harry and Emma filming scenes at the gallery today! pic.twitter.com/wrsrXH0Ho6

Cameras captured Harry and Emma filming at a gallery, dressed pristinely as the vision of an ideal 1950s couple. Supposedly, in this scene, they will meet up with Patrick!

The latest pictures show the three filming out and about on a windy day in England. We’re looking forward to more sightings of all the actors at work, and we can’t wait to see how the cast brings this story to life!