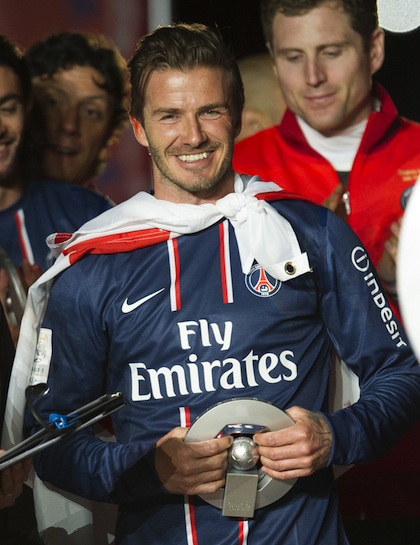 I don’t care what the target age range for this children’s television show is. You can definitely count me as a viewer.

Sprinting phenomenon Darren Campbell and Di Dougherty are hosting a new show launched by Sky Sports called "Game Changers", and someone very talented (and beautiful) has signed on to star in it: retired soccer god David Beckham. That’s right, the dad/model/athlete/man candy is going to be featured on TV!

Unfortunately for us Stateside dwellers, the show is being aired in the U.K. only, with the intentions of inspiring British kiddies to get active and be involved in sports. Aside from Becks, "Game Changers" will also feature Olympic track and field gold medalist Jessica Ennis-Hill and Paralympic wheelchair rugby captain Steve Brown. This panel of sports legends would be convincing enough for me to get up and get out.

Sky Sports ambassador David will lead a series of master classes, being filmed in front of a live studio audience. Forget Willy Wonka’s Chocolate Factory -- THIS is the Golden Ticket.

Although his influence on the sports world is immense, he said that he has always wanted to do more: “I’m very proud of what I’ve done in my career, so to be able to do this and give back to our future sporting heroes – it’s something very special for me.”

What better way to spend your time than inspiring the future generations early on about the importance of athletics and staying active? I only have one question: How can I get a live stream of these master classes?