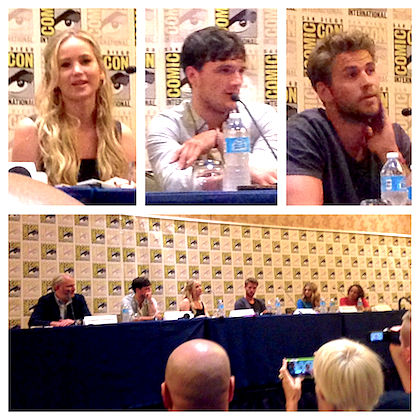 The one biggest drawback about film franchises is that they eventually come to an end. An entire company of actors, producers, directors, etc. spend years together and become immersed within a certain fictional world to the point that they become a second family (perhaps even a first), creating bonds that last a lifetime both on and off screen, thus making it all the harder to say goodbye than your usual one-shot motion pictures.

Such is the case with The Hunger Games saga. The 3-book series was adapted into 4 films to stretch that experience just a little longer, but this year, there is no more delaying the inevitable. The beginning of the end officially kicked off last week at San Diego Comic-Con, when the stars and filmmakers of The Hunger Games: Mockingjay – Part 2 ventured to San Diego for the last time (together, at least). Thursday, July 9, was quite a busy day for the crew, who appeared at a panel at Noon, a press conference at 1pm, and a taping on the “Conan” show at 4pm.

I was able to attend the latter two of those events, and allow me to just take a moment and say what a brilliant idea a post-panel press conference is?! You may not be aware of this, but press do not get any special access to panels; we have to wait in line with all the other nerds. However, the Mockingjay press conference was just that – a truncated panel specifically for the press, in panel format. Why don’t ALL films and TV shows have this? Especially some of the bigger ones. Let the fans have their panels with their Q&As and trailer premieres and such, and then give the press their 15-20 minutes with the talents as well. Get on that, SDCC!

Anyhoo, the press conference for Mockingjay (attended by Jennifer Lawrence, Josh Hutcherson, Liam Hemsworth, Willow Shields, director Francis Lawrence, and producer Nina Jacobson) seemed to focus primarily on the situation I opened this article with – the fact that this was the last hurrah for The Hunger Games. The bulk of the questions centered on the actors’ relationship with each other, with J.Law confirming “We’re best friends” and revealing that they are all on a group text together. Likewise, Josh stated about Jennifer: “She makes everyone around her feel free to be themselves.” Furthermore, when asked how the 3 lead stars deal with the pressures of Hollywood, Jen dismissed the notion and said, “Josh, Liam, and I live on our own island in L.A.” Perhaps the biggest reveal of this press conference was J.Law’s announcement “I’m trying this new thing; I’m trying to develop a filter.”

That will probably have to wait another day, though, because that filter was certainly not activated when she, along with Liam and Josh, visited the “Conan” show a few hours later that day. In fact, Conan O’Brien allowed Jen to let it aaallll out by inviting her to spout as many swear words as possible in 30 seconds… for a good cause! All while Josh and Liam looked on with what can only be described as a mix of horror and awe:

As someone who watched that unbleeped, I can confirm that there some truly ummmm creative things came out of that woman’s mouth. Whew!

So yes, we’ll all miss the undeniable chemistry and comraderie of the Hunger Games cast, and I was very glad I got to see them in action for myself before the magic ended for good!