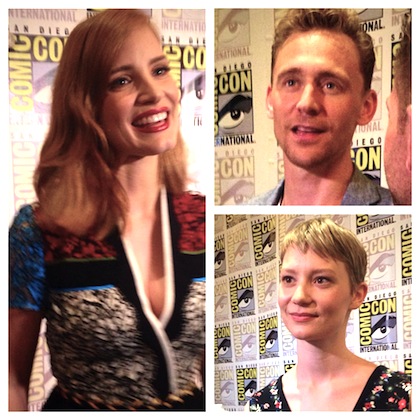 Everyone likes a good spooky tale… but clearly not as much as Guillermo del Toro! The man who previously brought us Pan’s Labyrinth and Mama is ready to freak you out once more with Crimson Peak, a breathtaking fantasy drama that puts one in mind of the great gothic horror/romance tales of old…

Clearly, any film involving the talents of Tom Hiddleston, Jessica Chastain, and Mia Wasikowska is worth spending your money on, and it was definitely worth standing in the press line at Comic-Con to get a chance to speak to the three stars of this sensational new film.

I only got about a minute each with the three actors (it was a long press line, y’all), and aside from Mia explaining how her ballet background allows her to endure physical roles like this (“within reason”), and Ms Chastain confirming that she has yet to be mistaken forBryce Dallas Howard, Tom Hiddleston relayed some interesting thoughts he had on the nature of “hauntings”…

I asked him if he’d every had a supernatural experience in his own life before, or at least some sort of creepy occurrence that he couldn’t explain, and he shared a story with me from his boarding school days as a lad and hearing some particularly unsettling things during the night, like a horse trotting down the hallway outside his dorm room. This was in England, of course, where just about every square inch of the country is probably haunted by something or other! (And he acknowledged that his impressionable 7-year-old imagination may have been running away from him  that night.) But Mr. Hiddleston went on to express his belief that buildings can absorb and retain the energies of those who came before. As an example, he noted the feeling of something profound having happened when walking into the legendary Apple Studios, where The Beatles recorded some of their most important, game-changing albums. He also believed that old houses have this capability as well, which brought everything full circle back to Crimson Peak. Well played, sir!

That was an enlightening two minutes, for sure… which I happen to agree 100% with, so all the better.

Be sure to check out Crimson Peak when it hits theatres on October 16!