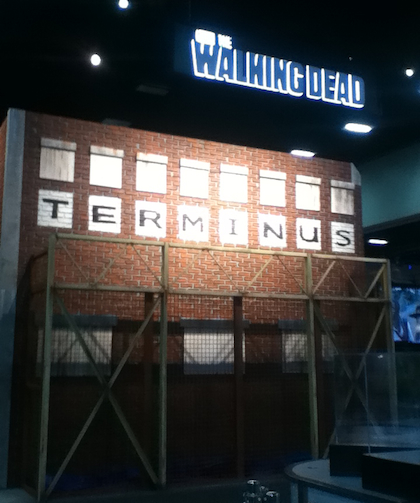 San Diego Comic-Con happened over the weekend… in case you didn’t know.

The world’s biggest comic convention packed itself up and scattered itself around the world again until next year. Let me be the 213,456th person to say it was incredible. From the celebrity filled panels, to the sneak peeks of movies and toys, to the costumes, to the fact that it even rained pretty hard on its last day (a rarity in San Diego), Comic-Con was a total thrill ride for everyone involved. At the same time, what made SDCC special this year was the fans themselves.

By now, you've probably heard all about new announcements of your favorite movies, TV shows and comic books. What you may not have heard about is the fact that Jack Black had a side kick that followed him around -- a little person who showed off his physical prowess when bidded to by Mr. Black. Elsewhere, “The Walking Dead” creator, Robert Kirkman, was called the World’s Biggest Child Killer to his face, which caused him to laugh. (If you've seen the show, you know what this means.)

None other than Daniel Radcliffe was spotted walking around the Hard Rock Hotel, while somebody else was seen walking around in a Spider-Man outfit who looked to be about Mr. Radcliffe’s height, and even was surrounded by people he was seen with earlier that morning. Later on, when the mask was removed, it wasn't Daniel Radcliffe’s head that popped out... Maisie Williams, known to fans throughout the world as the kick-ass aspiring assassin Arya Stark on “Game of Thrones”, walked around the convention in just a Spider-Man mask and sometimes in a V mask from V for Vendetta. As Arya is my favorite GoT character, I like to think that Ms. Williams was getting ready for some Season 5 assassination attempts by hiding in plain sight in the most simple way possible. Also on the streets, a man in an evil jester outfit, which consisted of black and white colorings and a skull mask, was seen taking pictures with fans and became a regular sight. Later on his Facebook page, none other than Peter Jackson himself revealed himself to the evil jester.

Apparently, this is quite normal at Comic-Con. Who can forget a few years ago when Aaron Paul dressed up as Rorschach from The Watchmen and went unnoticed until a female fan, who has studied Paul’s anatomy quite well, approached him, getting him to reveal his true identity? I don’t blame celebrities for doing this. It’s hard enough for a celebrity to walk around in public without being noticed; imagine going into a convention center full of hundreds of people who are actively looking for you!

Naturally, celebrities weren’t the only people dressed up for the San Diego Comic Con. Regular folk like you and me got to working on their sewing machines, drove to their local costume shop or thrift store, and slapped some make-up on their faces to look like their favorite pop culture characters. Instead of trying to blend in, however, these people were looking to stand out. The more effort a fan puts into their costume, the more photos they are asked to take. What’s cool about that is that, for five days, a regular person can be treated like a celebrity. One guy who made his own Batman outfit got into a DC party because people from DC loved his outfit.

Surprisingly, only one woman was spotted as the new female Thor. If you haven’t heard yet, there is a new development in the Marvel universe in which a woman is chosen to wield Thor’s hammer. She was absolutely stunning and looked like she could very well have been the new character. On top of that, she was a mom! If I was still a kid, I would be sure not to pick on any of her children. Of course, in reality, they would probably bully me...

Even the fans who didn’t dress up for San Diego Comic Con were rock stars. It's very rare to see anybody get overly upset about something, or lose their cool in general. Everyone seemed grateful to just be there. At the end of the day, that’s who this convention is for, after all. Sure, celebrities and creators of pop culture get to promote their work, but Comic-Con gives fans the perfect forum to interact with everything they love. The whole event felt like Woodstock, but with comic books and way less LSD. So, if you like comic books and aren’t a fan of LSD, look into going to the San Diego Comic Con in 2015!