CM Punk Making the Leap from WWE to UFC! 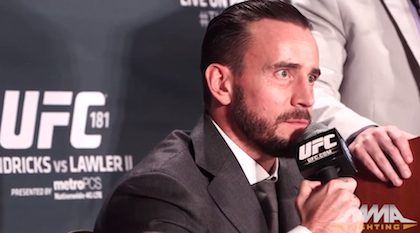 Calling all UFC and WWE fans!

This past weekend on UFC 181, it was officially announced that Phil Brooks would be fighting in the Octagon. Oh, excuse me -- Phil Brooks AKA professional wrestler, CM Punk, has signed with UFC!

At the age of 36, CM Punk retired from the WWE, and many of his devoted fans were devastated by the news. Many hoped and prayed that he would come back from his time away from the WWE, but it looks like this will be a permanent change.

His fans merely need to change networks. CM Punk will be fighting -- I repeat, FIGHTING -- in 2015! No sidelines with this superstar!

UFC fans, however, may not be as supportive of this transition. But they have a right to be a bit skeptical. Punk has yet to be in a MMA fight, ever. And if history serves correctly, the MMA world has not been an easy road for WWE stars. Brock Lesnar had a very successful career in the UFC, but it was a tough battle. Many wanted a piece of Lesnar in the cage because of his popularity, and they gave him a run for his money. After three years in the UFC, Lesnar returned to the WWE, where he was welcomed back with open arms.

Punk will most likely fight in the 185lb weight class, but the class beneath that is also an option. Punk is confident and excited about this new chapter in his life post-WWE.

Whether you support or are skeptical of CM Punk's move to the UFC and MMA, it will be an interesting few months for UFC.

Jason David Frank is already putting his name in the running to take on CM Punk. Name doesn’t ring a bell? How about the Green Ranger from the original "Mighty Morphin Power Rangers"? JDF has been 6-0 in amateur MMA matches and 1-0 in professional matches.

I would personally love to see this match-up, but I guess what would be up to Dana White and UFC.

What do you think about CM Punk transitioning to UFC?