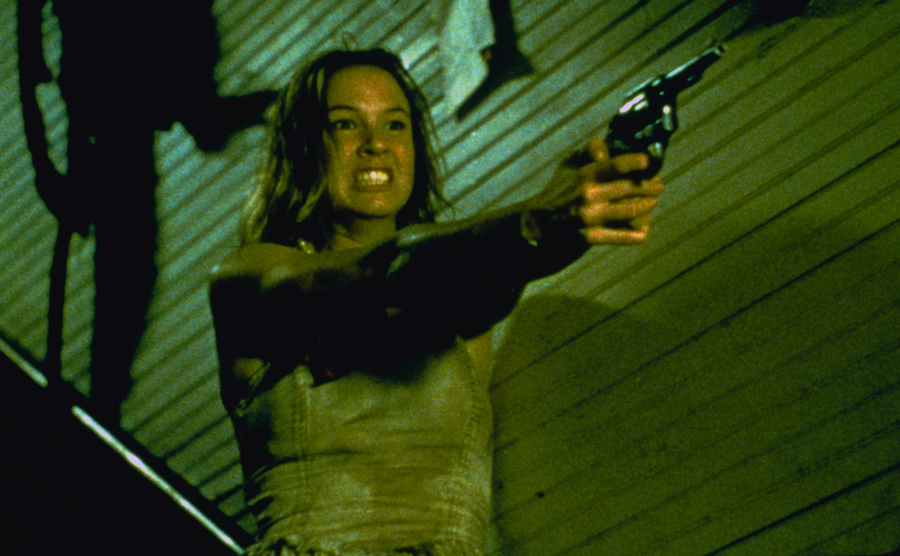 Filmed in Austin, Texas, this B-horror movie starring two future Oscar winners was clearly made before they were big and still working in Texas (yes, Zellweger isn’t British, she just plays one as Bridget Jones), but it wasn’t released until after they achieved fame in Hollywood. Zellweger was hot off her successful supporting role in Jerry Maguire, and McConaughey just got his biggest break from a film entitled A Time to Kill, which I have not seen but the cover shows him wearing glasses, meaning this was a serious film in which you take McConaughey seriously. With both of these young actors hot off some successful runs, why would it be such a big deal that they were in this?

That trailer doesn’t even give off half the ridiculousness that goes on in this flick, and while I do like McConaughey and Zellweger in TCM:TNG (gotta abrev this one with acros), it’s understandable why they wanted to hide this one. They were both working hard towards becoming well-respected actors, and while McConaughey took a step back and had a Failure to Launch, Zellweger was racking up the fame in the way she wanted. To tell you what exactly is going on in TCM:TNG might help paint this picture better...

It’s prom night. A night of wonder and hormones. Outside of a Texas high school where the festivities are going on, a girl is seen tweaking and freaking out about some girl she labels as “slutty”. Is this interesting? Very much so. Does she have anything to do with the movie or show up again? None whatsoever, but that’s the charm. Basically one of our soon-to-be dead teenagers finds her boyfriend making out with another girl and understands through his explanation that it’s all her fault. They hit the road where Zellweger and her plutonic date are in the back seat smoking weed. It’s also implied that the girl who got in the car with her jerk boyfriend has had pre-marital sex. There you go, they’re all sinners, so by horror movie standards, that’s more than enough to get the slaughter going.

The usual hijinks implode and the gang’s car gets into an accident, causing them to seek the help of a mechanic named Vilmer (a.k.a. McConaughey). Vilmer isn’t your average mechanic; in fact, he never displays that he can even fix a boxing match with mafia intimidation much less a car. He’s the real killer in this. Leatherface takes a backseat for much of the movie and explores cross-dressing, although there is a great scene where Leatherface faces off against Zellweger, causing her to leap off the roof of a building and survive with no injuries. From there, however, it is a tour de McConaughey as he goes completely over-the-top in classic Nicolas “Rage” Cage style.

Now, I can go into a major spoiler but I won’t do that… at least not yet anyway. Instead, I want to turn your attention to Zellweger and McConaughey’s performances. Zellweger does the job of the “final girl” and she does it well. She fits in exactly how she’s supposed to, including getting over-the-top at the appropriate moments. Considering many of the moments are a laugh-out-loud holler, she does a great job of staying in character and convincing herself that this is the most terrifying thing that has ever happened to her, because in real life, it is.

McConaughey, on the other hand, starts off pretty contained and villainous, but then the Rage Cage School of Acting pours out of him -- he screams for no reason, has a faulty robotic leg, and just acts like a genuine lunatic in general. None of it makes sense, but it’s all-perfect. Sure, he’s playing a character, but this is pure McConaughey, as he even enters a scene saying, “Alright, alright, alright.” But to understand what I’m talking, about take a look at this clip below. (The only reason why it’s NSFW is because of the text the uploader added):

So this TCM is very different from the others in that Leatherface really plays no part in it. This may in fact be the weakest turn for Leatherface I’ve ever seen, but it’s also interesting. Believe it or not, this movie is really about Vilmer and how he’s an agent of chaos brought in by the Illuminati to go around his little neck of the woods and cause harm to people for no particular reason that we know of (secret societies and their secret reasons). It’s a turn that, when it came, my jaw dropped because it just sealed it to me that this movie has everything. It’s perfect in its nonsense and maybe it tries to be something that it isn’t, but the writer/director Kim Henkel took a chance and what we have is something miraculous.

Fun fact: Being that they’re both from Texas, this is somewhat of a reunion for Zellweger and McConaughey. They both previously appeared together in another cult film called Dazed and Confused. Look below where McConauhey delivers a famous but now kind of creepy monologue about sleeping with underage women for the rest of his life. At about 45 seconds in, that’s Zellweger who walks by and whose butt McConaughey takes a peak at (NSFW language):