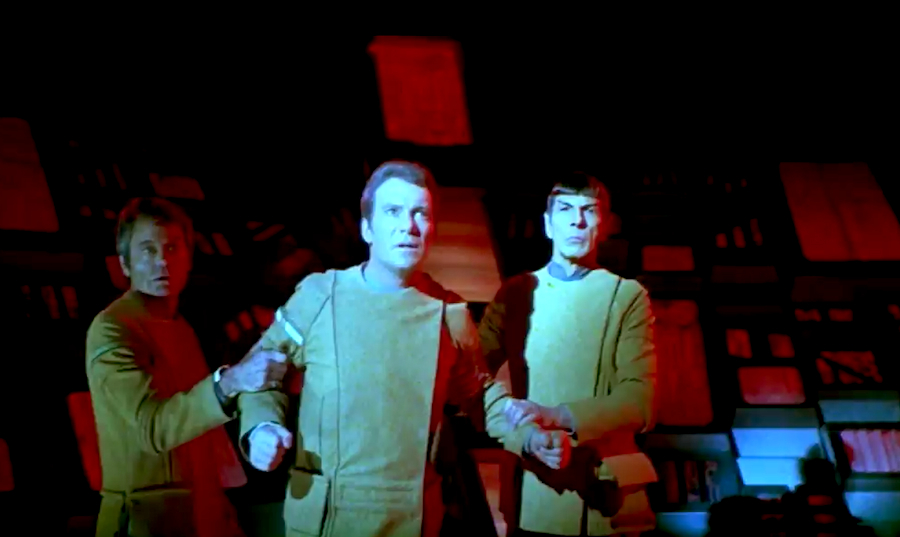 Seeing as how this is the umpteenth article that I have written about Star Trek, it should come as no surprise to anybody by now that I am somewhat of a Trekkie. I wasn’t born a Trekkie, I didn’t ask to be a Trekkie, and, quite frankly, I don’t even remember where you sign up to be a Trekkie. All I know is that Star Trek is something that has been a part of my life since I was just a youngster, and for the most part, I have had only a few complaints here and there. My main knowledge and fondness for the Star Trek Universe comes from the original six movies that featured the cast from the original '60s television series of the same name. Now most purists (or lazy people, as I call them) stick with the old philosophy that only the even-numbered Star Trek movies are good. It’s a tired little mantra that I’ve paid little attention to over the years, as I happen to enjoy all 6 of the original movies. That being said, let’s take a look at the first film that started it all: Star Trek: The Motion Picture.

Star Trek: The Motion Picture tells the story of Admiral James T. Kirk (William Shatner) and his desire to leave behind the bureaucratic position that he’s been promoted to in order get back in control of the USS Enterprise. The timing for Starfleet’s best commander to get back into the game could not be better, as an alien cloud with seemingly limitless power is approaching Earth with hostile-looking intentions. It’s up to Kirk and his re-formed crew to figure out this alien being’s motives before it’s too late for everyone.

So, right off the bat I’ll go ahead and concede to a few common complaints that everyone seems to have about this film. The pace of this movie does drag a bit (although I’ll explain why that is somewhat forgivable a little further ahead), and as a result this movie has earned the dubious honor of being considered “the boring” Star Trek film. Yes, it’s a slow movie, but I don’t find it the least bit boring because I have a tendency to, you know, pay attention to the movies I’m watching. But more on that later. The other common complaint about the movie is the weirdness of the uniforms. I’m not entirely certain what they were going for when they dreamed up these odd, blandly-colored, sexless things, but I don’t think it really works. The uniforms certainly don’t ruin the film, but they are a noticeable distraction. And while I have the fans on my side for this paragraph, I should also make it known that I don’t really care for the characters of Decker and Ilia. Their relationship is a thin piece of melodrama that is supposed to further humanize our crew and help establish an emotional connection with the audience, but on the whole I think it’s a little weak.

Now let’s get down to why I really like this movie. I’m not ashamed to say that I think Star Trek is better than Star Wars. Star Wars is an old-fashioned swashbuckler with pretty clear-cut (and rather simplistic) ideas about their own conflicts. Star Trek, at its best, has presented us stories with age-old themes and issues that deal with complex moral thinking. Star Trek: The Motion Picture is no different in that respect, as we are presented a grand science-fiction opera with a wonderful commitment to its characters and their ideas. Themes of identity and finding your place in the universe are prevalent throughout the whole movie. Kirk has been an Admiral at Starfleet Command for several years now but feels that his place is at the helm of the Enterprise because he believes that is where he has done the most good in his life. His own desire and stubbornness prove to have negative effects on certain characters, and this just goes to show that, while Kirk is our hero and a great man, he is still also a human being who is capable of making mistakes as well.

Next, we move on to Spock (Leonard Nimoy), who comes close to purging all his human emotions so he can be more like his Vulcan brethren but stops at the last minute because there is still doubt within him about whether this is what he truly wants or whether he is merely doing what is expected of him. And finally, the alien known as V’Ger, who is the source of the film’s conflict, is simply a lost soul that has traveled billions of miles in order to find the answer to the question everyone asks at one point: “Why do I exist?” When all is said and done, if you really allow yourself to absorb these ideas, then the characters will ultimately become all the more richer, thereby enhancing the story greatly.

As to the slow pace of the film (lots of pretty scenery without dialogue for minutes at a time), I can only imagine that RobertWest Side StoryWise and the powers-that-be were trying to really make this film seem like a major event. Remember that back in the olden days, folks didn’t have the current overload of entertainment options as there is today, and as such, going to the movies actually meant more. So they wanted to really amp up the spectacle, but since Star Wars had debuted 2 years earlier, they obviously decided to go in a much different direction by celebrating the awe and wonderment of a world where deep space exploration was a possibility. Star Wars takes place in a galaxy far far away and apparently in the past. Right off the bat, there is a natural disconnect between the story and the audience, which inevitably led to Star Wars being referred to more as science fantasy. There is nothing wrong with this by any means, but it is a noticeable difference in style and intent that should be pointed out. Star Trek has always been a fictionalized continuation of our time/reality, and as such it’s sci-fi elements are more deeply embraced because they are celebrations of what mankind is potentially able to achieve in the future.

Star Trek: The Motion Picture is not a film to be ignored, but one that should be respected for representing the best things about the Star Trek series as a whole. I’ll leave you with one final clip, and I should warn you that it’s one of those long scenes that I’ve previously mentioned. But really pay attention and you’ll see what the filmmakers were able to achieve in regards to combining great spectacle with genuinely good storytelling.

P.S. And major props to Jerry Goldmsith for his amazing score. Back then, music was made to be remembered.