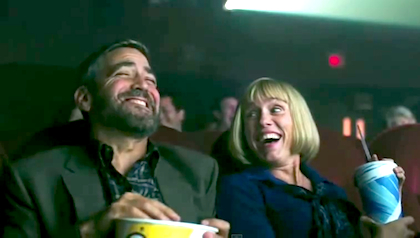 This will probably become pretty obvious to you once you get into the meat of this article, so I’ll go ahead and save you a small amount of time and just come right out and say it: I am a big fan of the Coen Brothers. I’m not so unobjective as to think they are absolutely perfect, but I do think they that they do a damn good impression of being so 90% of the time. So, it pains me when I see a perfect example of their talent and craft either maligned or, even worse, casually dismissed as being nothing special. Well, I’m here to tell you that Burn After Reading is, in fact, something very special indeed.

So, what exactly is this movie about? Well, if the answer to that question was simple, then we wouldn’t really have a movie. But the basic plot goes something like this: John Malkovich plays a former CIA analyst named Osborne Cox who has just resigned his job after being confronted about his drinking problem. He decides to fill his newfound free time by not just drinking but by writing his memoirs, which proves to be slightly more difficult then he planned, as he doesn’t really have anything interesting to write about. Somehow, a disk containing his unfinished book winds up in the hands of a pair of innocent yet bumbling gym employees (Frances McDormand and Brad Pitt), who believe that the memoirs are classified files containing top secret material. Linda (McDormand) believes that by blackmailing Osborne Cox, she can get the money she needs for a series of plastic surgeries designed to “reinvent” herself. Chad (Pitt) just thinks the whole thing is cool. The film also stars George Clooney as a former security specialist who spends half of his time sleeping with women who are not his wife (Linda and Osborne’s wife, played by Tilda Swinton, included) and the other half jogging and working on his secret arts and crafts project in the basement.

At worst, this film is nothing short of a comedy gem. At best, it is actually a frank examination of one the aspects of the human condition that most people would care to not talk about: self-importance. Many folks will complain that this film doesn’t have any kind of meaning, but those folks in questions fail to see that the meaning of the movie is that there is no meaning to what is going on. Burn After Reading is a film that illuminates the individual bubbles that we all exist in, day in and day out. Every single one of these characters thinks that what they are doing, thinking, and feeling is of the utmost importance, and all of them are hilariously mistaken. Each bubble bounces off the other to some degree of effect but not enough to burst it so that reality can come flooding in. Osborne Cox believes that he can offer the world something truly great by writing his memoirs, but they are ultimately nothing special. George Clooney’s character of Harry Pfarrer believes that he is God’s gift to women, as well as somebody that the government has a vested interest in. At the end of the day, though, his romantic entanglements are meaningless, and nobody in the government really cares about him. To Linda and Chad, their scheme to blackmail Cox is the greatest adventure that they have ever been on, but they are merely two hapless civilians driven by their idiotic mindsets. The only thing Linda wants is to get her plastic surgery so men will notice her again. She is so blinded by the "importance" of her goal that she cannot even see that her poor and timid boss is head-over-heels for her. Chad is just the physical embodiment of obliviousness, and Brad Pitt’s portrayal of him is nothing short of genius.

Seriously, if everyone in the film just stopped for one moment and took the time to actually appraise the situation and where they are in their own lives, then they might actually have a chance at improving said lives. But everyone is blinded by what they think is important in life, as we all are. Don’t get me wrong, this movie is not an indictment of these people or of society in general, per se, but merely an exaggerated look designed to bring to light how one’s self-importance can lead to odd choices and journeys down strange roads.

I should also point out that there is a sweetness and innocence to some of the characters that makes them endearing, even if we do spend the running time of the film shaking our heads at their idiocy. This is important to note, because it keeps the film from entering into nihilistic territory. And if The Big Lebowski has taught us anything, it’s that nihilists are freaking weird. What the folks in the film lack is a greater sense of perspective, and that is exactly what the great J.K. Simmons and David Rasche provide as two CIA operatives looking at this situation from up on high and not being able to make sense out of what these simple folks are trying to accomplish. The two of them are like the Greek Chorus of a classical play who spend their stage time trying to figure out what the hell they’re seeing as opposed to chanting about it with any sense of confidence. They have a grasp of the grand scheme of things (which, to them, is a whole lot of people doing a whole lot of nothing), but life is also made up of smaller truths, and as such they are almost as blind as our main characters, albeit not as dumb.

At the end of the film, when they express their indifference about the whole situation, it’s not a moment designed to make the audience feel the same way. It actually hammers home the point of just how important perspective is in life and how the lack of any kind of it can be severely handicapping and severely hilarious, depending on the circumstances.

Maybe the Coen Brothers did too good of a job disguising their film as a wacky comedy about idiots. It is definitely that, but one does not have to look too hard to grasp what it is that they are truly trying to say. For every person who has grabbed a gossip magazine desperate to find out which celebrity married who, this film is for you. For every person who believes that the world hinders on the personal crisis that they are currently going through, Burn After Reading is a film they should watch immediately. It is not a judgmental film, but merely a hilarious little adventure in which nothing matters and yet everything matters. There is real art in Burn After Reading and should no longer continue to be dismissed as a lesser comedy from two brilliant filmmakers.