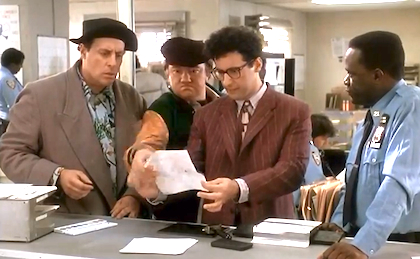 Oh Brain Donors, what a silly little film you are and how I love you just the same. In 1992, I was but a mere lad who still wanted to be either a Ghostbuster or Captain of The Enterprise when he grew up, and as such I still had not developed what some might call a discerning cinematic palate. But how could things like classic cinema even begin to compete in the mind of a 9-year-old when there were movies like Teenage Mutant Ninja Turtles and shows like "Power Rangers" that existed for the sole purpose of taking you on fantastical adventures? Well, in 1992, I was dragged to the theater by my older brother with the promise that we were going to see a movie in which a couple of guys acted like The 3 Stooges for around 80 minutes or so. To be fair, my brother didn’t know who the Marx Brothers were at the time, and neither did I, for that matter. But I had a vague notion of the Stooges, so I was prepared for a healthy dose of physical comedy.

So yeah, not exactly classic cinema, or The 3 Stooges for that matter, but a wonderful tribute to one of the greatest comedies of all time and to the three comedians who starred in it: A Night at the Opera. Tribute films are not a new thing necessarily, and wanting to pay homage to the greatest film comedians in history (in my humble opinion that is) is certainly not a strange thing. The problem was, though, that they kind of, sort of forgot to mention this fact in the film’s credits. And as such, the film was slammed as a weak imitator and outright accused of theft by some.

That scene always makes me laugh. Anywhoo, going back to the film’s reputation, it’s definitely not the prettiest one you’ll ever see. But when have poor critical reviews and accusations of thievery ever stopped me from defending a movie? Okay, I’ll admit the thievery thing is new, but I think I can still make this work. I’m no mind-reader, nor have I ever met anybody involved with this film, so I cannot speak as to why they forgot to mention this was based on A Night at the Opera. What I can tell you is that this movie is absolutely hilarious. It successfully took the spirit and the energy of The Marx Brothers and gave it a new and more modern edge and sensibility. Did they need to do that to the Marx Brothers? No, but they did, and I think it worked out just fine.

John Turturro plays Roland T. Flakfizer, a shady lawyer who weasels his way into becoming the director of a ballet company thanks to the gentle naivety of Mrs. Oglethorpe, the rich heiress that he pursues. Flakfizer is accompanied by two more insane gentlemen -- Rocco Melonchek, a crass cabbie; and Jacques, the lame-brained groundskeeper with the heart of gold. As Flakfizer, Turturro is mesmerizingly hysterical as a character who is not an outright carbon copy of Groucho Marx, but one with an energy of a slightly different sort that could almost make the two characters cousins. Bob Nelson plays Jacques very nicely, and while he is not the mute insane tornado of laughter and destruction that Harpo Marx was, he is an incredibly irreverent character that has the sweetness and innocence of Harpo. In regards to Rocco, Mel Smith (whom you all probably remember as the Albino in The Princess Bride) serves the same kind of function that Chico did back in the day, which is acting as a sort of bridge between Groucho and Harpo. And in that respect, Rocco is sort of a blending of Flakfizer and Jacques. He’s more intelligent than Jacques, yet not as conniving as Flakfizer because what he does share is a bit of the gentleness that Jacques has.

And when the three of them are onscreen together, it is a thing of beauty. The trio’s ability to embrace their insanity and spread it about with infectious zeal is truly wonderful to watch and something that is either missing in today’s comedies or is not being done very well at the very least. Yes, there are some crude and sophomoric moments here and there, but they are not the sum total of the film. It is the complete disregard for normalcy that makes Brain Donors a comedy that stands out. And, of course, they have The Marx Brothers to thank for that.

I could continue to go on and on about how funny this movie is and why it deserves a second chance, but in the end, it is the film itself that has to walk the walk, and it is you, dear reader, that must take the leap of faith and trust in my truly sage-like wisdom when I assure you, from the bottom of my heart, that copious amounts of soda will fly from your nostrils due to how much laughing you’ll be doing if you watch Brain Donors. It's a hidden comedy gem that deserves more attention and the opportunity to shine.