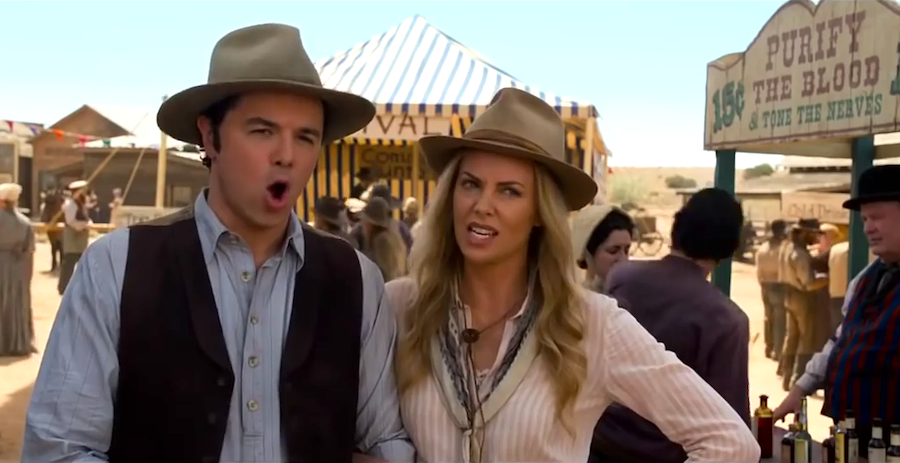 At the risk of losing my cinephile license or, at the very least, being compared to a critical anarchist like Armand White, I am going to step in and deflect a few attacks that have been leveled towards A Million Ways to Die in the West. I am certainly not suggesting that the powers-that-be need to start heaping a pile of awards on the film all of the sudden, but I have seen the movie listed on too many Worst of the Year lists and the reasons are all practically the same. Now, I will be the first to admit that if you were to open the thesaurus and look up the term “guilty pleasure”, you’d see a little tiny poster for the film right next to it with another little picture of Seth MacFarlane smiling and giving the thumbs up. But before I go on much further, let me take you through the plot quickly...

MacFarlane stars as Albert Stark, a man seemingly out of time as he finds the conditions of the Old West to be frightening and awful while everyone around him seems to take everything in stride. He’s just been dumped by his girlfriend for acting cowardly in a duel and is at a low point in his life until he meets Louise (played by Charlize Theron), a tough and independent woman who’s just arrived in town and takes a liking to Albert after he clumsily saves her life. Romance and a happy future both begin to blossom for the two when suddenly Louise’s boyfriend, Clinch Leatherwood (Liam Neeson), arrives into town to steal Louise back and to send Albert on a one-way to trip to the afterlife. Although, if it was a two-way trip then that would mean that Albert was a zombie or a vampire and that would’ve been incredibly cool. But I’m getting a little off track here. So let me start by going through a few of the negative points that I agree with critics on before moving on to what I think are some of the positive aspects of the film.

- The production value is a little low in terms of setting up the world of the film. The sets look like they might’ve been thrown together overnight, and the fact that the film was shot in digital does nothing to hide this. The costumes are fine I guess, but the ultimate effect that the film leaves you with is one of a bunch of people putting on a school play. Had the film had a more gritty and realistic look, then that might’ve actually added to some of the humor and really made MacFarlane’s character stand out further.

- Some of the cursing is unnecessary. Mr. MacFarlane is right in the fact that a certain amount of foul language can be absolutely hilarious and elevate a script, but given the amount of times he turns toward swearing and the attention he calls to it, it seems like he is under the impression that having people curse in a western is a very new thing. Shows like “Deadwood” and films like Blazing Saddles would certainly prove that notion false. Again, I don’t mind the vulgarity (I’ll get into that more later), I just think it could’ve been tempered a bit.

- The Back to the Future reference wasn’t funny.

- This next bit of criticism I find to be interesting because it actually leads to something positive I have to say about the film. The actual plot of the film is pretty thin and generic. Boy is a coward. Boy meets Girl. Girl gets in trouble. Boy stops being coward. Now I know that practically every type of story has been done to death, but it’s the job of the filmmakers to supplement it with either a creative vision or a twist or two plot-wise. And in this, MacFarlane does succeed more than some other filmmakers, which will lead me to the positive points that I haven’t really heard anyone mention as of now...

- The plot, as generic as it may be, actually matters somewhat in this movie. I had been attempting to put my finger on why so many comedies released today are awful, and it finally occurred to me that it’s because nobody actually gives a damn about the stories in these movies. Most (not all) comedies these days are merely a series of comedic bits strung together with a bit of story that most people lose interest in within minutes of the film’s running time. Now that’s okay if you’ve got nothing but non-stop laughs for the audience, but, unfortunately, most of them don’t. I’ll be the first to say that there are one or two jokes here and there that fall flat in A Million Ways to Die in the West, but it wasn’t as noticeable as it could have been because I was somewhat interested in what was actually going on in the movie. And what was it that piqued my interest so?

- The chemistry between MacFarlane and Theron is absolutely phenomenal. When two people meet and fall in love in a movie, it’s nice to be able to see just why it is that they are starting to develop feelings for one another. The movie doesn’t steamroll over the romance of our two leads. They actually talk to each other like two normal people and, more importantly, you see them listening to each other as well. It also doesn’t hurt that when one of them makes a joke, the other person actually laughs at it, which is always a nice touch because you don’t see it happen as often as it should in movies. Sure, their romance follows a typical structure that involves the second act misunderstanding and the third act reconciliation, but I’m fine with them using that tried and true formula, because I was truly invested in a relationship that didn’t rely on pandering or an overabundance of melodrama.

- Seth MacFarlane ain't bad in this. Practically every review I’ve read moans about how miscast he is, and I have a theory about this. Either every critic got to the movie 5 minutes late or they all suffered a sneezing fit at the exact same time during the beginning of the film. The opening narration speaks of our main character as a man who seemed like he was born out of time. Boom. There’s your explanation right there. He’s supposed to look and sound out of place. I would actually have less regard for the flick if they did cast a more “appropriate” actor because then the whole damn film would make less sense then it already does. As such, MacFarlane is a perfectly serviceable Woody Allen-type character and does a fine job as our guide into this supposedly very scary time period.

- But what about all that vulgarity?! I mean, wasn’t the movie so vulgar? Have you ever seen a more vulgar movie? Yes. Yes, I have. Plenty of very famous comedies in the past have used vulgarity to their credit, and aside from one incredibly gross scene involving a man’s hat, I honestly don’t think they went too far that often. When the comedy works in this film, it works well. MacFarlane’s comic style has often been criticized as being low brow, and while that is somewhat true, it doesn’t change the fact that, at least 8 times out of 10, he hits the mark. Flipping pop culture upside down and kicking it in the bum has always been MacFarlane’s calling card, and it has served him well. He does not excel in the “jokes department” necessarily, but rather in the twisting of expectations and a form of referential humor that zeros in on certain factors and amplifies them to an extreme that is funny and unexpected. His work in A Million Ways to Die in the West is no different or less successful.

This is a movie that works on it’s own terms. It doesn’t reach for the stars and it’s certainly not trying to be a game-changer, but it’s not a lazy film either, because at least a little thought was given to the humor and to some of the relationships as well. It’s ultimately a silly little movie that set out to be funny, and for all intents and purposes, I think it succeeded. Please keep in mind that I am not in love with this movie but merely consider it a reliable friend that I can call upon day or night when I’m feeling blue. I cannot deny that the film made me laugh. And in this day and age, when good comedies are hard to find, I’ll readily stand up for the guilty pleasures.

Check out the red band (i.e. NSFW) trailer below: