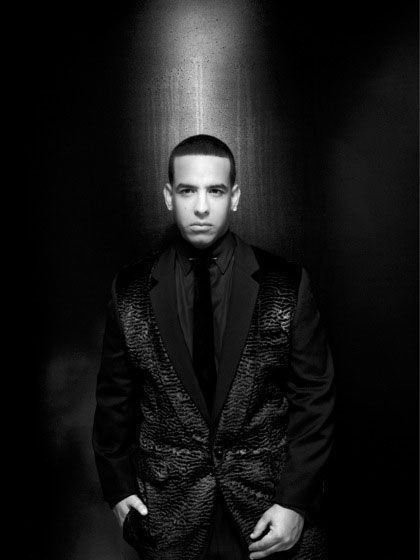 Listen up, everyone, because one of the biggest stars in the urban Latin scene, Daddy Yankee, is getting ready to release his next album, Mundial, by the end of April.

The goal of the album was to take the sounds, vibes, and emotion from all of the music he has been exposed to while he has been traveling around the globe, seamlessly fuse all these influences, and bring them together with his own unique urban style. One of the coolest people I've ever had the opportunity to talk to, Daddy Yankee was kind enough to give me the scoop on what's going on in the Daddy Yankee Nation.

YH:So, in what direction did you want to take your new Album,Mundial?
DY: Expectations are really high right now, because, basically, I had a vision to make a concept album, and that's how I started working on the upcoming album,Daddy YankeeMundial. I was touring the whole world, and I said, "How can I make a concept album using the influences of the entire world?" "¦ But I really began working the album with the first influence, which is the Caribbean. The whole reggaeton scene. And I said, "What can the U.S. offer in terms of music?" And I said, "Hip Hop." So, we have Hip Hop in the album. We got electronic music from Europe in one of the tracks. We're using some of their vocal effects they use on the album. And all the music that I have received touring in South America, Mexico, Central America, we just put everything together and fused it all together with my urban essence.

YH:How did you go about bringing all these styles together when producing the beats on the album?
DY: I worked with my in-house producers, but also a lot of musicians helped me out with the album in terms of production. People from South America, a lot of DJs that have worked with me in Europe, and people from the U.S., saying "Use this element", or "Do this", or "You have to use this type of keyboard if you want to make a certain sound." Basically, different essences that people were giving me to help me out. We've got a great album.

YH: Did any other artists help collaborate on any of the tracks?
DY: Yeah, one of my best friends in the Latin urban scene,Tito El Bambino, one of the biggest stars in the Latin raggaeton scene, and he's with me on the album. And right now, for the next album,Daddy Yankee Mundial Prestige, which is the second version we're going to be working on, I'm going to add more collaborations. This is just the beginning. It's crazy. It's like 40 songs, the whole album.

YH:We're going to be seeing you on the CBS soap opera, "The Bold & Beautiful," later this year. Tell me about that.
DY: I'm playing myself. They gave me this opportunity, and it's just one of those vehicles, and I just want to communicate to the entire world that Daddy Yankee is a multicultural artist. I am also really excited to be guest starring on the only American soap opera broadcast simultaneously in Spanish with SAP [Secondary Audio Programming] technology.

Are you doing a performance on the show?
DY: Yeah, it's 100% Spanish. Music is the universal language. I'm the proof of that, you know?

YH:You're also starting production soon as the lead role in the upcoming film,Pleasant Avenue. Are you excited for all these acting opportunities?
DY: We start filming at the end of the year, andGeorge Torres, who wroteCarlito's Way, he wrote the script. It's really dope, and it's really intense. Everything that is happening with the acting, it's something that I'm not really pushing, but people have been calling me to do certain things, in terms of acting. I said, "Okay, I'm ready."

YH:You've already released a cologne for men, and now you have another fragrance on the way?
DY: The new fragrance is going to be launched a month after the album. This is a female version, because we had so much success with the first one, the men's version. And then girls were skirts calling me up, all the fans, saying, "We want our version!" so we decided to create one for the girls. There's a lot of girls already asking for the fragrance. It's from the Caribbean, it's tropical, it's eccentric, and at the same time it's really sexy for the girls.

YH:Your song, "Grito Mundial." was going to be used for the 2010 FIFA world cup promos. Who are you going to be rooting for?
DY: We have a lot of representation from the Latin perspective, from Argentina, Honduras, Mexico, Chile, Uruguay, Paraguay, and I would love to say Puerto Rico. I would love for us to be there, but we aren't in the Cup. But for me, it's still a victory because we have so many Latin teams that are going, so it's still a win situation for me.

YH:What are you doing when you aren't working on your music?
DY: Working on everything. Working on the brand, also the foundations in the Dominican Republic, Puerto Rico, and giving back to the community. It's about life, man, and enjoying what you do with it, and I'm enjoying what I'm doing right now. I'm very grateful for everything people have done for me. I receive a lot of love out there from different countries. I always try to stay real with my people, and I always be me. That's it: Daddy Yankee.

Daddy Yankee Mundialdrops on April 27th, and be sure to check his Official Website for locations of in-store appearances in the L.A. area on May 10 & 11!