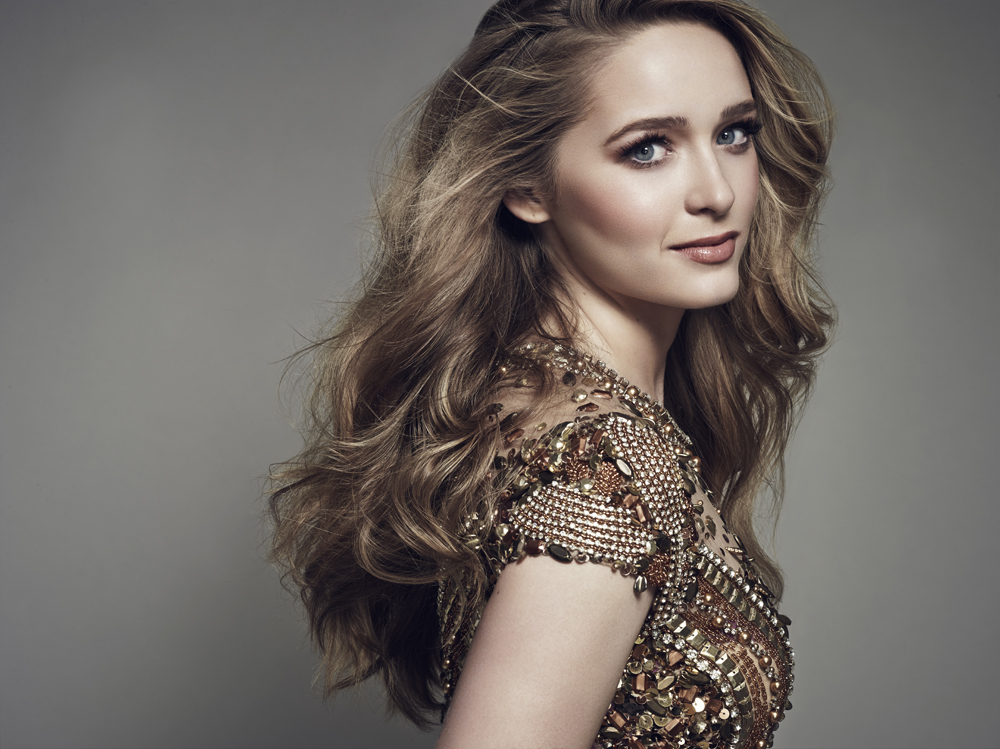 Last fall, she was named Hollywood’s Miss Golden Globe, but today we are calling Greer Grammer an actress and singer destined for supreme stardom.

At a young age, Greer’s passion for musical theater emerged (she says she was in the show Annie about three times), which was most likely spurred by family members also involved in the entertainment industry, including her Emmy-winning father Kelsey Grammer ("Cheers", "Frasier") and her sisterSpencer Grammer ("Greek").

For the past five years, Greer has portrayed the loveable, reformed mean girl Lissa in MTV’s “Awkward” in addition to gracing the big screen and having a recurring role in ABC Family's “Melissa & Joey”.

But things have come full circle for Greer, as she is returning to the stage at the end of this month in a newly adapted showThe Unauthorized O.C. Musical.

You’re thinking this never-before-seen musical sounds familiar, and I know why.  It’s most likely because you’ve seen the early 2000s television show “The O.C.”, which followed the lives of four teenagers and their chaotic, conflicting families all wrapped up into one incredibly amazing teenage “nighttime-soap”. Brought to you by the creators of Cruel Intentions: The Musical,Jordan Ross and Lindsey Rosin are busy producing what is sure to be an incredibly entertaining musical version of “The O.C.” Greer has been cast as Summer Roberts (originally portrayed by Rachel Bilson on camera), the underestimated, feisty Valley Girl who falls in love with the geeky but ironic Seth Cohen and is best friends with the glamorous yet emotionally plagued Marissa Cooper.

We chatted with Greer about this new/old role and so much more! See what she had to say below!

YH: “The O.C.” is my all-time favorite TV show, so I am so stoked for the musical.  I can’t wait to see you channel your inner Summer Roberts.  What was your first reaction when you got the role?

GG: I’ve been friends with Jordan Ross, who did Cruel Intentions: The Musical, and we were talking one night and he said that he was thinking about an “O.C.” musical. Every single time we’ve got together in the past four years that I have known him, we’ve always talked about how “The O.C.” is our favorite show, so I said, "If you do it, I need to be in it." He texted me the next day saying he was working on it, and he asked me to sing, and he came back and said he wanted me to be Summer, and I was so happy, especially because I have always considered myself more of a “Marissa.”

GG: Well, Ryan was my guy, I liked Ryan more than Seth. And I lovedMarissa so much.

YH: So you were excited to play something that you didn’t necessarily identify as?

GG: Yeah, I mean, I loved Summer, and I know that so many people loved Summer… so I was so excited to channel my inner Summer Roberts. I identify as Marissa, so I feel like, as an actor, it’s super fun for me to get to play Summer.

YH: Why do you think you identify more with Marissa than Summer?

GG: That’s hard. I think, being from Malibu, I felt like I was... more broody, even though I come off as energetic and happy. I was popular but I didn’t feel popular. It was this whole thing I had in middle and high school, so I just identified with her more.

YH: If Marissa were still alive, where do you think she would be?

GG: Well, with Ryan. Let’s get that straight! I think that she was going to go stay with her dad?

YH: Yes, they were going to Greece.

GG: Yeah, they were going to go to Greece and she was going to help him, and I think that would have been really good for her.

YH: We’re talking about her as if we know her so well.

GG: Yeah, as if she is a real person. I have a friend who used to tell me that in eighth grade. He would be like, "Oh, is Greer talking about her fake friends again? The people from the show?" And I was like "Yeah, they’re my best friends, I love them so much."

YH: I noticed you recently died your hair brown. Was this a decision made for the role of Summer or something spontaneous?

GG: So, when I got the role of Summer, I was still blonde, and I had asked Jordan if I needed to dye my hair, and he said, "No no, absolutely not, it will be fine." But it just so happened that I had a Lifetime movie, Manson’s Lost Girls, that I had to dye my hair brown for, and we wrapped about a week ago. My manager was like, "Alright, back to blonde", and I was like, "I think I’m going to keep it for the musical"… because I just feel more like Summer with my hair brown.

YH: Tell us about the premise of this show and how you convey “The O.C.” story to an audience in musical form?

GG: So, it’s really great what Jordan and Lindsey did with the script. They basically took the script of the pilot episode, because that’s such a great episode, and taken great music moments from the show and incorporated them in. Brendan Robinson, who’s playing Seth, we sing "Champagne Supernova" together, and he’s probably going to be wearing a Spiderman Shirt, and we’re going to have rain sound affects come in for that scene so people will know what we’re referencing. It’s really interesting the way they did it, because it takes places throughout the whole pilot, but like I said, we’ve done different music moments and incorporated them into the pilot. We have “Dice” in there and, of course, “Forever Young”.

GG (cont): We have a really great moment at the end where we get to go through different moments from the whole series so that the fans and everyone that’s there will get to feel like they got to see more than just the pilot.

YH: What is your singing experience and how are you training for this performance?

GG: I did musical theater my whole life… that is what got me into acting. And then I went to boarding arts high school, and I was a musical theatre major there, and we did a ton of shows and we had private voice lessons. So, I have always loved singing and doing musicals, so I’m so excited to do this and kind of get back to those roots.

YH: You also star in the MTV show, “Awkward”, which is hilarious. How has your character Lissa evolved over the past five years?

GG: She’s evolved a lot. Lissa’s definitely not as mean; Season 1 Lissa was pretty mean. She was manipulated and being told to do mean things by Sadie… she didn’t really have a backbone, she just kind of did whatever Sadie told her. And the first time we saw her kind of rebel against that was in the Season 1 finale where she said, "No you’re ugly and mean," or something like that. And I think that’s the kind of character we’ve been trying to play with. She’s just more bubbly – she’s not stupid, I don’t like to think of her as stupid. She’s just very naïve and simple-minded and sweet.

YH: What can we expect for Lissa in this final season? Does she reignite any past relationships or does she have any new prospective suitors?

GG: The seasons are broken into two -- high school and the summer after freshman year in college. She doesn’t really have a suitor at all throughout the rest of high school. She is with her friends, she is in charge of prom committee, and is enjoying being a senior. And then she comes back from college, and then there may be a little bit of a thing with somebody that we meet.

YH: What are some career aspirations you want to tackle after the musical is completed?

GG: They’re doing Clueless the musical on Broadway supposedly… so that’s something I would love to do. But I would love to do a lot more Broadway and singing because I really miss it. I would just like to keep working and play a lot of different characters and be able to show a lot of range.

Our interview with Greer ended on a fun note: a trivia game! I admit I asked some softball questions, but Greer definitely knows the characters she’s played like the back of her hand.

1) What word is Summer Roberts notorious for saying?

2) What does Lissa have to wear after a cheerleading accident?

Greer’s Answer: "This is how it’s done in Orange County"

FILL IN THE BLANK

YH: If you were to date one of the “Awkward” characters in real life, would you be team Matty or Jake and why?

GG: That’s hard. Matty, because there was a boy I liked in high school that was like Matty Season 1. As much as I’d like to say I would go for the Jakes, because I love the clean-cut look, you never go for the nice guy… until you’re older!

YH: The best thing about having a father and a sister who are also actors?

YH: One message you want to give to your fans?

GG: Aside from watch “Awkward” on August 31, it would definitely be, I love the fans so much. I love my fans, I love “Awkward” fans. We wouldn’t be here without them, so I am just so thankful everyday that we have the fans that we have. So thanks, guys!

Well, Young Hollywood readers, you heard it from Greer. Watch the final season of “Awkward” premiere on August 31! The day before, August 30, Greer will be headed to Newport Beach (fictionally, of course) for the one-night only The Unauthorized O.C. Musical! Unfortunately tickets are sold out, but we are hoping the show will be available online in the near future!