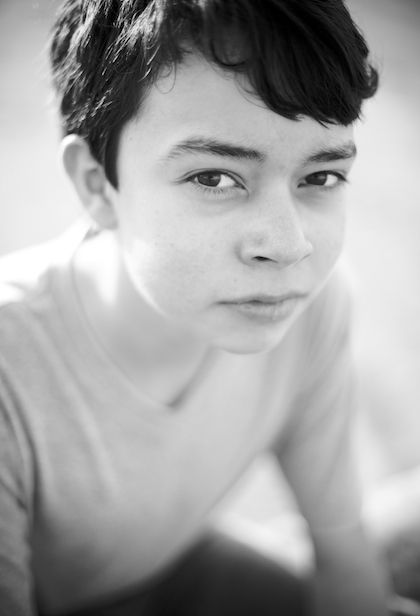 At just 14 years old, Noah Ringer has already appeared in two feature films and competed in martial arts in the World Championships. Both an actor and talented competitor, it is no wonder this teen is making headlines for his movies and sport. He will be starring as Emmett in Cowboys and Aliens, which will be opening in theaters tomorrow (July 29).
Noah was born and raised in Dallas, Texas. He had no experience in professional acting before his first movie, The Last Airbender, where beforehand he became an immediate fan of the animated series after his taekwondo instructor introduced it to him because of his resemblance to main character, Aang (fellow students would even call him “Avatar” because of the show!). A casting director simply sent out a message to the studio looking for talent, and Noah dressed up asAang (in his Halloween costume!) and got the part.
But Noah can really fight! In fact, his first tournament was at the World Championships in Arkansas where he won 1st place in every category he competed in. He continued to compete in tournaments, and in the first two years he won 80 gold medals out of the 100 total that he earned. Noah won “Competitor of the Year” in 2008 and the State Champion title for the 2008-2009 year in five categories: Traditional Forms, Traditional Weapons, Sparring, Extreme Forms, and Extreme Weapons.
Check outYH’sQ&A with this impressive youngster!
-----------------------------------------
YH: What can you tell us about your character Emmett in your new movie,Cowboys and Aliens?
NR: Emmett is the only kid in the main cast and gets into peril a lot. He tends to be a prime target and gets chased. I love, loved doing the movie and I got to meet some amazing people. The movie is going to be high action, a lot of thriller, with a sci-fi, western twist. It’s going to be something people have never seen before and I think our audience is going to love it.
YH: How was working in this film different from your first movie, The Last Airbender?
NR: Cowboys and Aliens had a lot more of my acting whereas The Last Airbender had a lot more martial arts mixed into it. For that movie, I had to rehearse for the martial arts scenes and rehearse my lines – it was like two roles. But for Cowboys and Aliens, I really got to relax and focus on my acting. I have a great acting coach and she trained me for a month before The Last Airbender and I’ve been doing some summer movie camps, which have been really fun.
YH: A lot of people nicknamed you “Avatar” from the animated characterAang inThe Last Airbender even before you auditioned for it. Did you have a feeling you were going to get the part?
NR: I had no idea I would get the part! I went out just to have fun, to see about this whole acting world, and it was a big surprise to get the part. But I’m so happy that it happened, and it has really changed my life for the better.
YH: With a double black belt, how much do you practice martial arts each week?
NR: I’ve been doing martial arts for about 4 years now and just got back intotaekwondo where I got my second degree. Before The Last Airbender, I was practicing 5 or 6 hours a day. It’s been fun and I’m still really into it.
YH: Congrats on making MTV’s Top 21 Breakout Stars of 2010 and the 3rd Annual SkyKid.com “Coming of Age” Best Actor Movie award forThe Last Airbender. Is acting now something you want to pursue as a career?
NR: Definitely, I’m really enjoying it so far, and I’ve got to work with some great people and would love to continue doing it.
YH: How do you balance school, work, and martial arts? What advice do you have for teens?
NR: Definitely keep up with your grades. I’ve been homeschooled for my entire life, so when I started acting, I did the schooling on the set. I’ve been keeping up my grades and getting back into shape with martial arts. I’d say just go for it and do the best you can.
YH: What has been your favorite part working as an actor?
NR: I love all the different people you get to meet as an actor. Everyone has accepted me with open arms and we’re like family since we work together everyday. I also love being an actor and getting to be different characters and doing the things you wouldn’t usually do in normal life. I mean, where else can you fly on wires or ride horses as fast as you can or blast aliens? It’s a really fun, wild ride.
YH: Least favorite part?
NR: There is no least favorite part. I love everything about acting.
YH: Your mom forced you to do taekwondo and then you loved it. (Moms do know best!) Why this sport versus any other sport?
NR: She said, "You need to do this sport for a month, and if you don’t like it, then you can stop; but if you do love it, then you can keep going." Of course, she was right, and I loved it. I think she chose it because of the self-defense and the character traits they teach you in class. They spend a lot of time teaching about honesty, integrity, and loyalty. It has really helped me to be successful in life.
YH: What do you do besides acting and martial arts?
NR: I play pretty much any sport – I love racquetball, ping pong, tennis, skiing, and golf.
YH: Doyouhave any other upcomingprojects?
NR: Not right now, we’re just hanging out. I’m just trying to keep up with school and live the best life I can.
---------------------------------------------------
Hollywood is happy to see this young star on the rise! Be sure to catch Noah Ringer in his second movie, the sci-fi-meets-western flick, Cowboys and Aliens, tomorrow!
(Image provided by 42 WEST)
-Evelina Weary, YH Staff