Charlie Brown & Gang Coming to the Big Screen for a Whole New Generation! 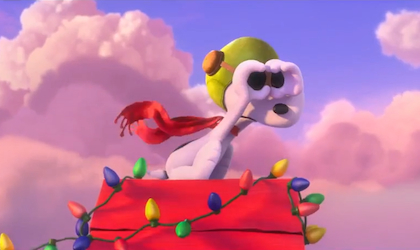 Good grief! And I mean that in the best way possible.

The popular comic strip Peanuts is going to be hitting the big screen to reunite Charlie Brown, Snoopy, and the rest of the gang on November 6, 2015, just in time for their 65 anniversary. Along with a new installment in the Peanuts repertoire comes a sleek new animation style that will be released in glorious 3D! But don’t worry, the new look will still capture the spirit of the original hand-drawn Peanuts without looking completely computer animated.

I know what you might be thinking right now -- Since this will be geared for a new generation of fans, will we be seeing Lucy and Peppermint Patty twerking it? Will Linus and Charlie Brown ride road bikes to a coffee shop to discuss why vinyl records have SUCH a better sound than digital copies? Will Sally embark on a pop music career and dress in revealing outfits, while grinding with Schroeder during a pop hit that he stole from somebody else? Will Woodstock show off his rear end and break the Internet? No. Just no to everything above. You can trust that director Steve Martino (Horton Hears a Who, Ice Age: Continental Drift) and producer Paul Feig (Bridesmaids, The Heat) have something a little more traditional up their sleeves. After all, Feig did kind of make his own Peanuts TV show when he created the cult dramedy “Freaks and Geeks”, amirite?

Martino and Feig have said that while the movie will not be as old-fashioned as previous Peanuts installments, it will definitely reflect the Peanuts past generations have grown up with and love. They haven’t revealed much about the plot as of now, but they have said that the film will revolve around Charlie Brown (of course), and “puts him on a quest to get something he’s sure he needs, even though he discovers he’s pretty OK just as he is.” That sounds like pretty much any movie ever made. So whether the new Peanuts movie will be like Finding Nemo or The Terminator, I have no idea. The trailer isn't too much help either, featuring Snoopy going on another one of this Red Baron hallucinations adventures, but you can get a good idea of the animation style and the film's tone: