Character Breakdowns for Netflix's "The Chilling Adventures of Sabrina"! 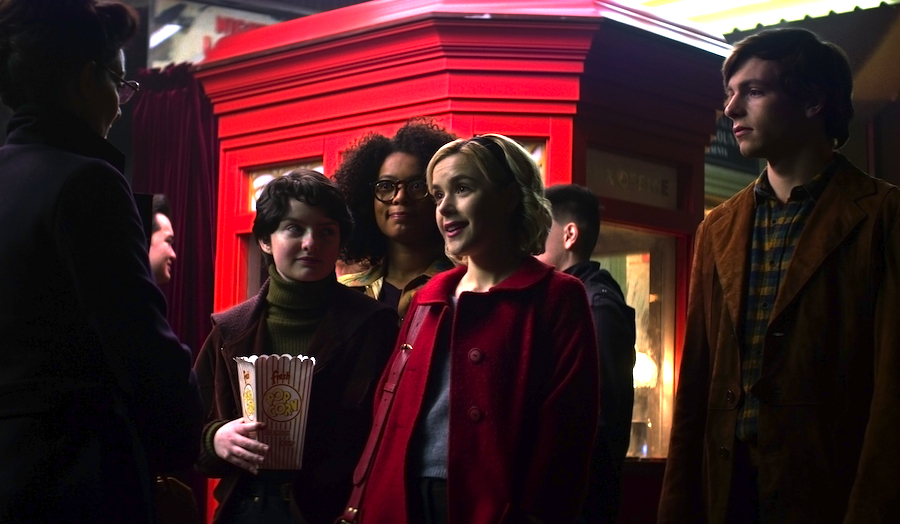 After the trailer for Netflix’s upcoming original series “The Chilling Adventures of Sabrina” dropped last week, fans have been talking. Non. Stop. About how excited they are to see a dark twist on a classic and beloved character. And now, it looks like we have a new look at who some of our starring characters will be! Netflix released some official stills and character descriptions, and it looks as though we’re getting dark here in the town of Greendale. Sit down for a spell (get it?) and let’s take a look at who will join Sabrina this season, shall we?

Our titular character, Sabrina, is an empowered young woman. As a sophomore in high school, she’s learning a bit more than your standard biology. As a half-human/half-witch, Sabrina is just starting out her dark education as a sorceress. It’s a balancing act for Sabrina, maintaining her life as a normal girl at Baxter High with her new life learning to be a witch. She is incredibly “intelligent, compassionate, and brave to the point of recklessness,” and “is all that stands between us and the forces of darkness that threaten our world.” In the photo above, Sabrina is pictured with Susie Putnam (played by Lachlan Watson), Rosalind Walker (Jaz Sinclair), and boyfriend Harvey Kinkle (Ross Lynch). 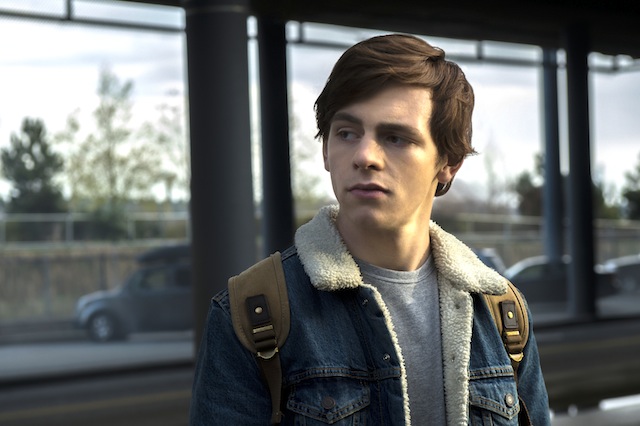 Harvey is Sabrina’s (incredibly hunky) boyfriend. He is our story’s Prince Charming who’s been put into a dark, twisted fairy tale. The son of a coal miner, Harvey is “a dreamboat and a dreamer”. He has no idea of the dark forces that are conspiring against him and Sabrina. It’s safe to assume he’s completely unaware of Sabrina’s new powers as a witch. Poor thing, he doesn’t even know what’s coming. 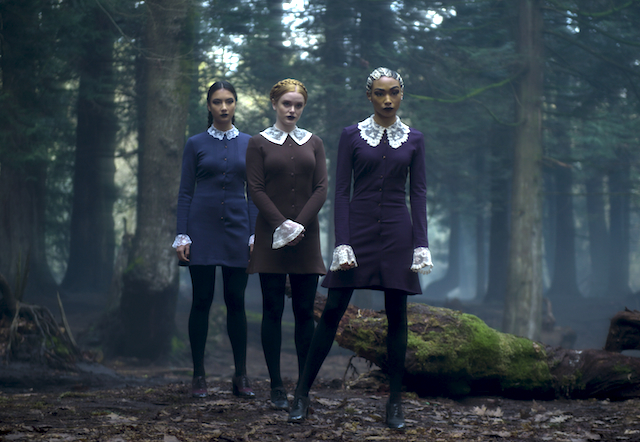 Agatha, Prudence, and Dorcas are “The Weird Sisters”. The three of them stand as “powerful, uncanny teenage witches at the Academy of Unseen Arts who look down their noses at Sabrina for being half-mortal.” Okay first of all, with names like that, these three witches better stop picking on my girl Sabrina. They honestly sound like a trio of Draco Malfoys from Harry Potter, hating on someone for being half-mortal. Speaking of Harry Potter, in the HP universe, there’s a band that Hogwarts students listen to called “The Weird Sisters”, so if these three don’t start singing some songs about magic at some point, I’m out. 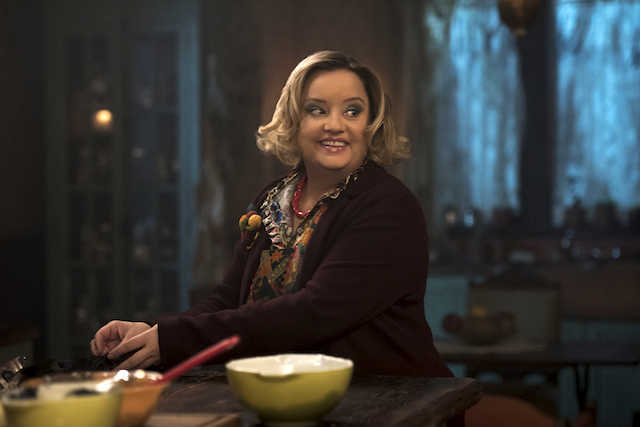 Hilda is one-half of Sabrina’s witch aunts, and the more nurturing and motherly of the two. Apparently, Hilda is very skilled when it comes to brewing spite jars to use against any enemies. She also enjoys concocting love potions for Baxter High students. Um… is that legal? I guess all of that doesn’t really matter when you’re a witch. Sign me up for a love potion. Oh, and one of those spite jars… just in case. 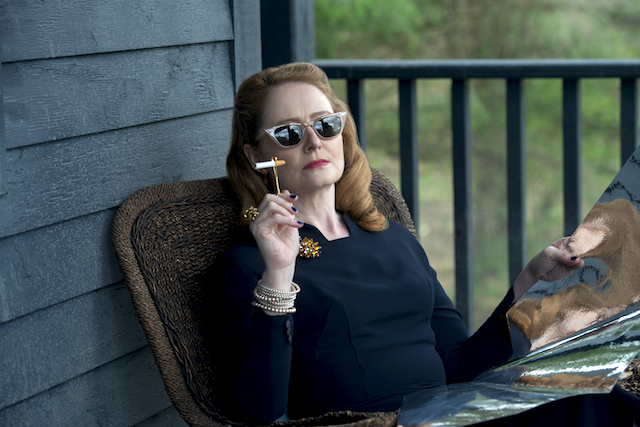 The other half of Sabrina’s witch aunts, Zelda is the more stern of the two. A proud and devout woman, “Zelda believes there is no greater honor than serving the Dark Lord as a member of the Church of Night.” She provides all the family discipline, is incredibly protective of Sabrina, and is “very much Cain to Hilda’s Abel.” 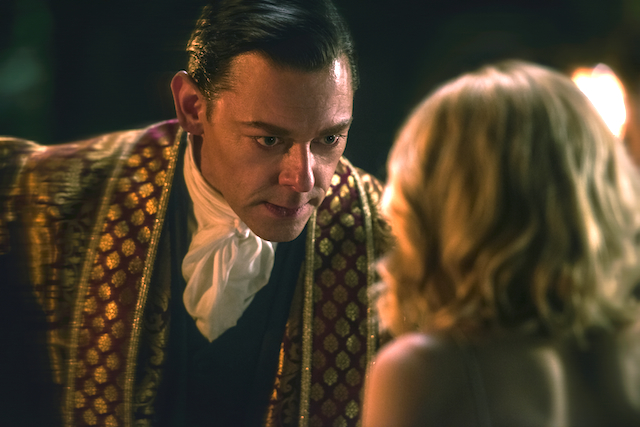 Okay, so this creepy looking dude is the High Priest of the Church of Night and Dean of the Academy of the Unseen Arts. So, he’s probably connected to The Weird Sisters, since he’s basically like… a religious principal of their school? Father Blackwood (creepy name for a creepy dude, btw) is described is “ruthless and ambitious” and hiding “a terrifying dark agenda that will put him in direct conflict with Sabrina and other members of the coven.” Dear god, RUN SABRINA! Please stay away from this dude. 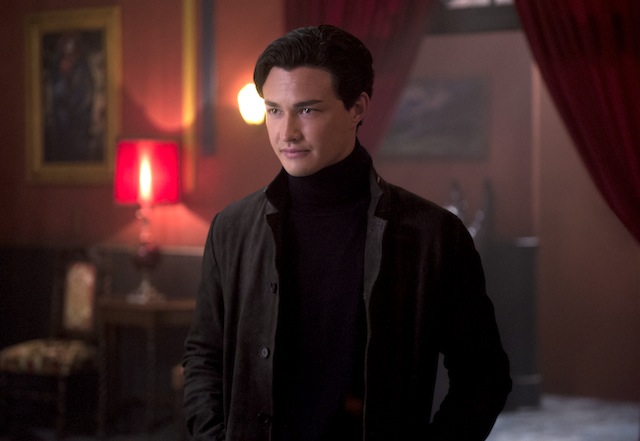 Nicholas is a young and devilishly handsome warlock at the Academy of Unseen Arts. Nicholas befriends Sabrina, who is new to the school to start studying witchcraft. “An acolyte of Sabrina’s father’s teachings, Nicholas is drawn to Sabrina as well, and there are immediate sparks between them." Okay, he may be cute, but he needs to stay away from my girl Sabrina. We don’t need a love triangle between this dude, Sabrina, and Harvey! LEAVE. HARBRINA. ALONE. Also, I just came up with the ship name "Harbrina", so you’re welcome. 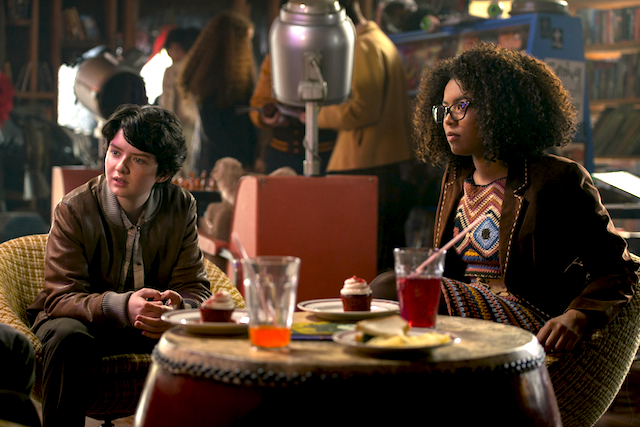 So, these are Sabrina’s BFFs, Rosalind and Susie. Rosalind is “brash, empowered and outspoken” and also happens to be the daughter of Greendale's minister. Susie is “brave and optimistic despite being bullied at school” and a founding member of Baxter High’s newly formed WICCA club. She lives on a farm at the edge of town, and “deals with a terrifying supernatural threat at home.” Yikes! Here’s hoping these girls can help Sabrina stop whatever dark forces lie ahead (and vice versa)… 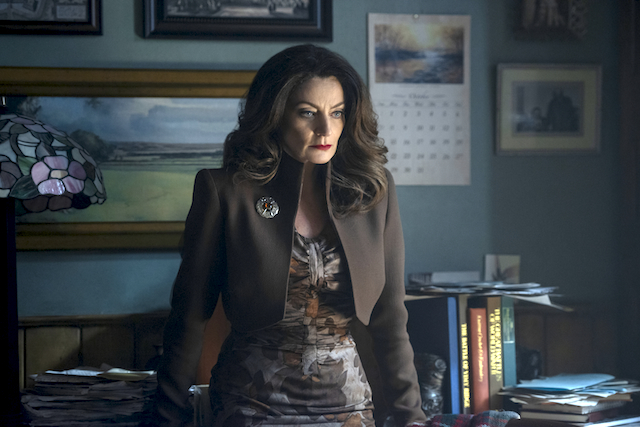 Mary Wardwell is Sabrina’s favorite teacher at Baxter High and becomes one of her mentors. Suddenly, after being possessed by the Devil’s handmaiden (Madam Satan), Wardwell becomes “a sultry, cunning manipulator, always trying to lure Sabrina down the Path of Night.” Um... how scary is that? Your mentor ends up being possessed into someone that may want to hurt you? No thanks, I’ll pass and find a new mentor… 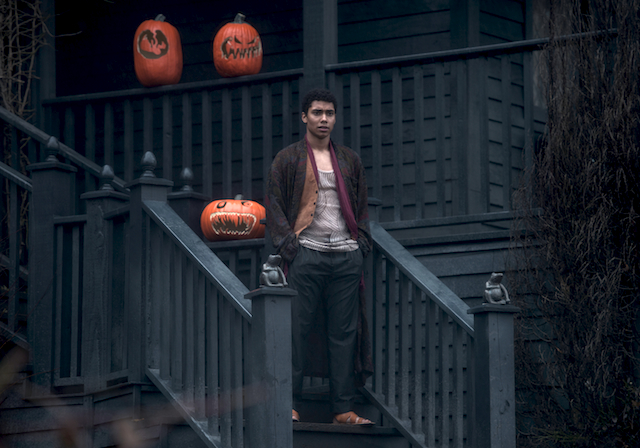 Ambrose is Sabrina’s cousin, a warlock from England that has been put on house-arrest by the Witches Council. Because of this, he is forbidden from leaving the funeral home where he lives with Sabrina and her aunts. “Witty, puckish, and pan-sexual, he is one of Sabrina’s partners in crime, always up for mischief.” I like him already. He sounds like someone that could really help Sabrina should she find herself in some deep trouble (which she definitely will).

Seeing these new stills got me even more excited for this show! While we wait in PURE AGONY for another month or so (39 days to be exact… not that I’m counting or anything), check out Netflix's website and watch the trailer over and over. In the meantime, I’m gonna go practice some spells in case any dark forces come my way…