Chadwick Boseman to Get Up (Get On Up!) in New Biopic! 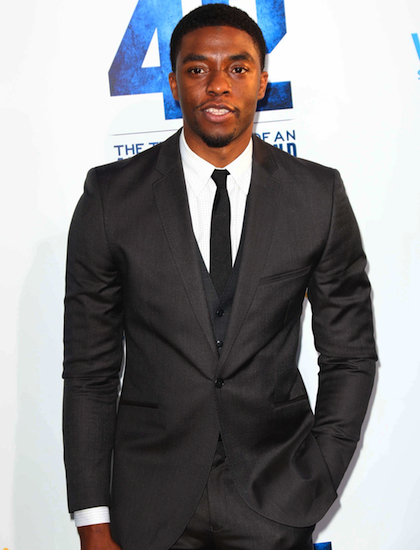 Pop Quiz: What do Jackie Robinson and James Brown have in common?

Other than first names that start with ‘J’ and both being legends in their field, you might be hard-pressed to find any other similarities between these two men… But that is about to change, thanks to our good friend Chadwick Boseman.

The up-and-coming actor, who recently wowed audiences in his breakout role as baseball great Robinson in the film 42, has reportedly just accepted the lead in another biopic, this one about the late music star Brown. The film, currently untitled and still in development, will be helmed by another breakout talent, Tate Taylor, who previously directed The Help.

Not surprisingly, Taylor is looking to call in some reinforcements from his Oscar-winning film, namely Viola Davis and Best Supporting Actress Octavia Spencer, to round out the cast of the Brown project.

After a decade in development hell, Universal finally gave the official go-ahead after Taylor hopped on board, and it looks like much of the film will be shot in Mississippi (close enough – Brown was from Georgia). The script will be written by British-born duo Jez and John Henry Butterworth, best known for penning the 2010 Naomi Watts thriller Fair Game, about the real-life CIA operative Valerie Plame.

Now, before you start screaming “WTF, a biopic about one of the most significant African-American musicians of our time, directed by a white guy and written by two British dudes??”, pump the brakes and check it – Tate Taylor was born and raised in Mississippi (in fact, he still lives there), and the Butterworths have a good track record with biopics. And with this kind of acting talent on board, I think we’re in for some good stuff!

Check out our interviews with all three amazing stars below!

Check out the trailer for Get On Up below: