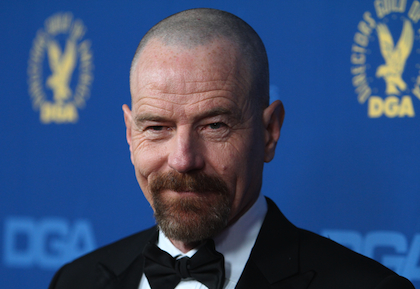 Normally I don’t like to report on casting rumors unless it’s officially a done deal, but I feel like if I acknowledge this publicly, it will somehow encourage the Universe to manifest it into reality. Like how when you think to yourself how you haven’t talked to so-and-so in forever and then they call you out of the blue?

Even though the Man of Steel sequel will be called Batman vs. Superman, the latter will have way bigger fish to fry, as his classic arch-nemesis, Lex Luthor, will be making a grand entrance into the DC movie franchise.

And it gets better – we’re seeing reports that none other than Bryan Cranston has been cast in the role, and the studio is set to make a formal announcement at the end of September (in conjunction with the “Breaking Bad” series finale).

This could very well be the soothing balm needed for those burned so badly byBen Affleck being cast as Batman (I am not one of them). Aside from already having the hairdo (or, he did, anyway), Cranston has more then proven over the past few years that he can play dark, sinister, and powerful… All ingredients that make up Lex Luthor as well as Walter White. The question is, though, is that the direction that Zach Snyder wants to take the character?

The most memorable onscreen incarnation of Mr. Luthor to date goes toGene Hackman’s be-wigged portrayal in the late-‘70s and early-‘80s, and as we all recall, he played Lex as rather campy and ludicrous. Kevin Spacey upped the sinister factor in Superman Returns but still maintained a degree of wry humor. Then there’s Michael Rosenbaum, whose tenure on “Smallville” gave us a much more complicated and angst-ridden version of the classic comic book villain. Lucky for us (or for Snyder, anyway), Cranston can go in any of these directions. He can play scary, but he can play goofy just as competently.

It’ll definitely be interesting to see how it pans out, and how he will stack up at the Yang to Henry Cavill’s Yin. That is, if all this is true… (*fingers crossed!*)