'Catching Fire': Or, How to Nail a Big Budget Sequel 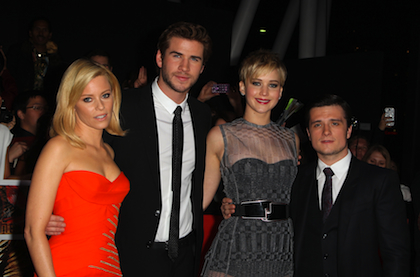 In 2012,The Hunger Games burst upon the scene, delighting millions of fans of the book series and just as many newcomers to the stories as well. After such a successful box-office run, a sequel was, of course, inevitable, and fans got just that when The Hunger Games: Catching Fire debuted last week with the 4th highest opening weekend gross of all time. Hollywood has since been scratching their heads as to why they waited so long to release a film where a girl with a bow and arrow does battle with a grumpyDonald Sutherland while a drunk Woody Harrelson looks on and smiles with approval. Oh, andLenny Kravitz is a dressmaker that sets things on fire.

Putting sarcasm aside for a short time (at least for as long as it takes for me to write this next sentence), I should say that I enjoyed both the original movie and its sequel quite a bit. After having been somewhat less than impressed with the smattering of films released in recent years based on tween fiction (I’m glaring at you, Bella Swan), I was thankful for the opportunity to embrace the maturity and thoughtfulness of The Hunger Games. The first film succeeded in doing what any first film in a film series should do: it introduced us to the world of the story and made us actually care about those that inhabited it. This in and of itself is not the easiest thing in the world to accomplish, but even more difficult this day and age is the art of decent sequel-making.The Hunger Games: Catching Fire is that rare sequel that manages to not only be entertaining in its own right but even eclipses its predecessor in many aspects. Would you like to know exactly just what it is that I’m babbling about? Very well, cast your eyes below and take a gander at the three reasons why I think that The Hunger Games: Catching Fire is not only a good sequel but an excellent movie on its own.

Bigger Is Not Always Better... But Sometimes It Is.

It is certainly true that when planning a follow-up to your first film, you should consider the idea of expanding on certain elements. You want to continue to entertain your audience, but you will not be able to do so if all you do is show them the same thing all over again. The Matrix Reloaded and Pirates of The Caribbean 2 are two examples of blockbuster sequels that took the insanely fun action from their predecessors and elevated it to another level. However, the problem that most people had with those movies was that the action eventually eclipsed the story it was trying to tell. One of the most common problems with sequel-making is that the desire to go bigger can oftentimes become more important than the actual progression of the plot. In this regards,Catching Fire is a success because, even though we’re thrown new enemies and obstacles, when it comes time for Katniss to do battle in The Games, we don’t forget why any of that is important in the first place. The action in this film is allowed to be exciting and fresh without taking anything away from the overall journey of our characters.

Taking The Time to Deal With The Consequences

It’s never an easy thing for somebody to rise to the occasion and assume the role of a hero. Katniss never set out to be the hero of this story. She was just a girl trying to protect her family and the innocents around her, while also attempting to stay alive in the process. But in a world as harsh and unforgiving as the one shown in The Hunger Games, a mere act of kindness is tantamount to raising arms against the ruling faction. In the first film, we see that her actions have clearly had an effect on the world around her, and in the sequel, we get to see the consequences of those actions. Katniss begins to understand just how important she is to everyone in the 12 Districts but is not able to fully embrace her role as a hero because of the danger that follows her. Catching Fireis a film that respects its audience, because these elements of tragedy and sacrifice are not glossed over in favor of action or pointless humor. The filmmakers trust that the audience will find that Katniss’s personal journey is just as exciting as anything that happens inside The Games.

The love triangle is one of the most overused devices in the history of entertainment. When it’s done well, it can be a powerful driving force for the movie. When it’s done poorly, you get sulking werewolves and vampires. One of the things that I appreciated the most about The Hunger Games is that, even though it takes place in a highly fictional and stylized world, the love triangle is easily one of the most believable aspects. I’ve heard that, in the books, Katniss falls for Peeta much quicker than what we see in the movies. That’s all well and good I guess, but the beauty of these movies is that their feelings towards each other, whether good or bad, are tightly woven into the fabric of the plot. As those feelings grow and change, so does the plot. Their relationship becomes something that’s much bigger than just two people trying to deal with their feelings, and it only serves to make the story that much more intriguing in a way that lacks the sappiness and condescension of other movies. It’s just another example of the care and respect that the filmmakers have for these stories.

Hunger Games: Catching Fire is now playing at a multiplex near you!