Cast of "Dancing With The Stars" Season 27 Revealed! 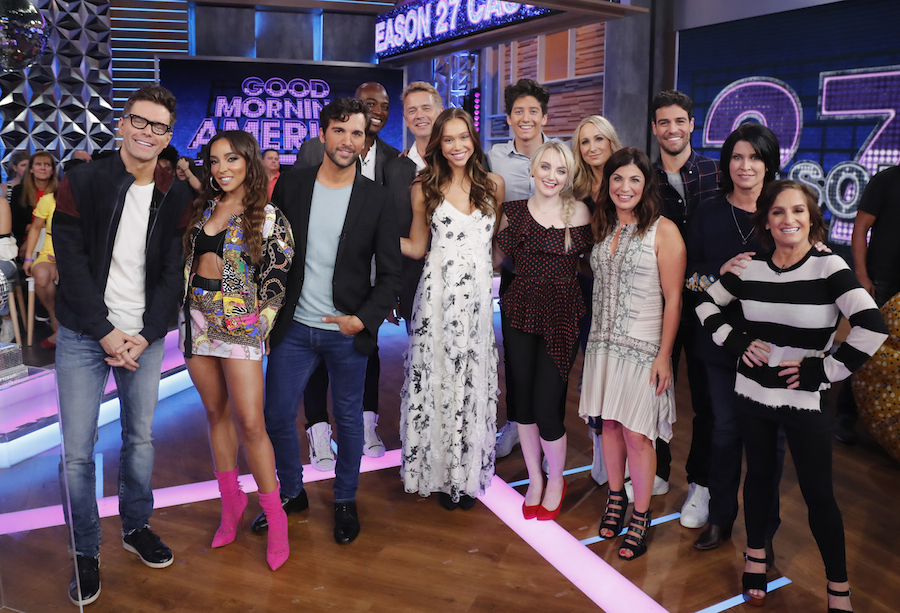 This morning (September 12), the “Dancing With The Stars” cast was revealed for the upcoming 27th season. FINALLY!!

Fans have been speculating for months on who this season’s cast would be, and now, we finally have answers! Let’s take a look at our couples that will be entering the ballroom this fall, shall we?

Meet the cast! The #DWTS you know and love returns LIVE September 24 at 8|7c on ABC. pic.twitter.com/ej3VnIom6S

You may recognize Juan Pablo from one of his most recent roles as Fernando, Kimmy Gibbler’s husband in “Fuller House”. This is the third “Fuller House” star to hit the “DWTS” dance floor, following Candace Cameron Bure in Season 18 and Jodie Sweetin in Season 22. He is paired with two-time “DWTS” winner Cheryl Burke.

.@juanpablodipace and @CherylBurke are two of a kind working on a full house... and probably an Argentine Tango! #DancingOnGMA #DWTSpic.twitter.com/4zHMgUtssM

From the 1980s hit series “The Dukes of Hazzard”, “Bo” Duke himself John Schneider with take the dance floor with Season 24 winner, Emma Slater.

Fan favorite from “The Bachelor” and “Bachelor in Paradise”, “Grocery Store Joe” will woo his way into the ballroom with recent “Dancing With the Stars: Athletes” winner, Jenna Johnson. Heads up, Joe -- roses can’t save you from eliminations in the ballroom! Once you’re eliminated, it’s clean up on aisle DWTS!

.@AmabileJoe will be delegating that spill on aisle four to join @Dance10Jenna for this season! #DWTSpic.twitter.com/q5x3gcTWFk

Something wicked this way comes! Evanna Lynch, aka Luna Lovegood from the Harry Potter film franchise, will take the ballroom with pro Keo Motsepe. Keo is notorious for getting voted off the show early each season, so let’s hope Evanna can cast the perfect spell to have them dancing all the way into the finals!

Another star from a 1980s hit series, “The Facts of Life” star Nancy McKeon will pair up with two-time winner (and seven-time finalist), Val Chmerkovskiy.

Our first duo has been revealed! @iamValC's new partner is Nancy McKeon! #DWTSpic.twitter.com/0nxz1jaoyb

She may have won a gold metal, but can she take home the Mirrorball Trophy? Olympic gymnast, '80s icon, and one-time America's Sweetheart Mary Lou Retton will pair with Sasha Farber, who came in 3rd last season with Olympic ice skater, Tonya Harding.

America can get ready to fall in love with @marylouretton all over again as she partners with @SashaFarber this season. #DancingOnGMApic.twitter.com/GLYrci9Vp3

With hits like “2 On” and “Body Language”, it’s no secret that hit singer Tinashe should have a good sense of rhythm, but will it translate into the ballroom? The singer pairs with the NEWEST “DWTS” pro, Brandon Armstrong, who was upgraded from troupe dancer to pro for the upcoming 27th season.

.@Tinashe is a do it yourself musical marvel. Now, alongside @brandonkstrong, she hopes to add the Mirrorball trophy to her list of accomplishments! #DancingOnGMApic.twitter.com/RbTz4AQBtx

Comedian Nikki Glaser joins the cast with pro Gleb Savchenko. Fans may recognize Glaser from her stand-up specials, or her appearance in Amy Schumer’s 2015 comedy hit, Trainwreck. Will she go far, or will she have us laughing her all the way to elimination?

.@NikkiGlaser brings her impeccable comedic timing to the dance floor with @Gleb_Savchenko this season! #DancingOnGMA#DWTSpic.twitter.com/LiTNRyneaw

For those of you that aren’t up to date on the latest social media influencers, Alexis Ren is one of the top Instagram models, with just shy of 13 million followers on the platform. In 2018, she was named Sports Illustrated’s Swimsuit 2018 Rookie. She pairs up with newer pro, Alan Bersten.

.@DanelleUmstead goes from Alpine skiing to the ballroom as she joins @artemchigvintse to make a run at the Mirrorball trophy! #DancingOnGMA #DWTSpic.twitter.com/XGQvVzWHKb

.@AmericanIdol mentor @mrBobbyBones will find the dancing shoe on the the other foot as @SharnaBurgess teaches him a thing or two in the ballroom! #DancingOnGMA #DWTSpic.twitter.com/3qLVS6XXHN

Former linebacker for the Denver Broncos, DeMarcus Ware will join this season’s cast with Season 25 winner Lindsay Arnold. Will this season be a touchdown for the pair?

We know he can rack up the quarterback sacks but can @DeMarcusWare tackle the foxtrot? With @lindsayarnold as his partner our guess is yes! #DancingOnGMA #DWTSpic.twitter.com/WCyom1Vrfg

So, what do you guys think? Who will exit the ballroom first? Have any predictions of who will take home this season's coveted Mirrorball Trophy? The Season 27 two-night premiere of “Dancing with the Stars” airs LIVE on September 24 at 8/7c on ABC!