Breaking Down the 2014 Golden Globe Nominations! 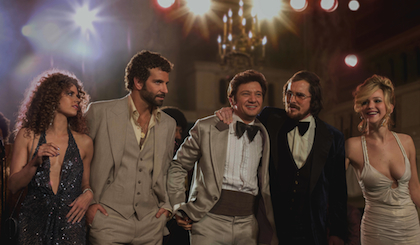 Do you hear that, kids? It’s the sound of my hands wringing in fervent anticipation! Sure, it makes it kind of hard to type, but I can’t help myself, because it’s officially AWARD SEASON!!!

Following yesterday’s SAG Award nominations, we awoke bright and early this morning to news of the 71st annual Golden Globe nominees – the Oscar Race is officially ON!

So, as always, let’s take a piece-by-piece look at how Award Season is shaping up so far!

- 12 Years a Slave and American Hustle, two vastly different films but both featuring the seedier side of the good ol’ U.S. of A., lead the pack with seven nominations each. All four ofHustle’s principle cast earned themselves a nod, while12 Years a Slave garnered recognition for its enigmatic star Chiwetel Ejiofor, as well as Michael Fassbender and Lupita Nyong’o in the Supporting categories. These could very well be the two pictures to beat at the Oscars!

- Tom Hanks had two critically-acclaimed performances to choose from this year – the title role in Captain Phillips andWalt Disney in Saving Mr. Banks. However, it is becoming abundantly clear that award voters are leaning more toward the former, and it’s no exception here. Aside from a nomination for Emma Thompson, Saving Mr. Banks was effectively shut out, while Captain Phillips is enjoying a slew of nominations, including Best Motion Picture – Drama and even a Supporting Actor nod forBarkhad Abdi, who literally had NO acting experience or aspirations before being cast in this film!

- BTW, who is in charge of the Best Motion Picture – Comedy or Musical category?? With the possible exception of Wolf of Wall Street – which, by all accounts, seems like more of a satire than a comedy – the rest of the nominees are dubious at best. American Hustle? Inside Llewyn Davis? Nebraska?Her?? Yes, all these movies have a sort of tongue-in-cheek sensibility, but one could hardly call them a “comedy” in the traditional sense. This might be another case of the HFPA stretching their definition of the category in order to accommodate more deserving nominees that didn’t make the Motion Picture – Drama cut.

- The Butler, for all its star power, laid a big goose egg at this year’s ceremony. Many were expecting at least a nomination forOprah Winfrey, and the blogosphere is crying foul this morning. Don’t worry, guys, I think Oprah will be just fine…

- As expected, Matthew McConaughey and Jared Leto were both recognized for their phenomenal and transcendent performances in Dallas Buyers Club, though the film itself did not get a nomination. Matteo will have his work cut out for him in a category brimming with the likes of Hanks, Ejiofor, Idris Elba, and Robert Freaking Redford; however, Jared could possibly strong-armBradley Cooper and Fassbender for that Supporting Actor trophy. If he does, then count him as a favorite come Oscar time!

- Other odds and ends worth mentioning: Gravity picked up nods for Motion Picture – Drama, Best Actress (Sandra Bullock), Director (Alfonso Cuarón), and Original Score (Steven Price). Nebraskadid very well for itself too, garnering nods in the aforementioned Comedy or Musical category as well as veteran actor Bruce Dern, relatively unknown character actress June Squibb, and Alexander Payne in both the Directing and Screenwriting categories. And then there’sJulie Delphy, whose Céline character from theBefore… franchise continues to bring her kudos, this time for the third film in the series, Before Midnight.

Now on to Television:

- There were snubs aplenty in these categories, including a big fat ZERO for perennial favorites “Mad Men” and “30 Rock”, as well as HBO’s mega-hit “Game of Thrones”. And while Sofia Vergara received a nomination for her role in “Modern Family” (and the show itself was nominated for Best TV Musical or Comedy Series), NO other cast members were recognized! Say WHAT?? But that’s not all – Last year’s Best Drama Series and Best Actress in a Drama Series winners, “Homeland” and Claire Danes, will definitely not be enjoying a repeat, as neither picked up nominations this year. And while everyone was expecting the extremely popular Netflix series “Orange is the New Black” to get a nod, alas only star Taylor Schilling picked up a nomination. Maggie Smith, who won last year for “Downton Abbey”, was also snubbed this year… possibly because they got tired of her never being there to collect her awards.

- Still, there are a lot of old standbys on the list, including “Breaking Bad”, “Downton Abbey”, “The Good Wife”, “Parks and Recreation”,Julianna Margulies, Kerry Washington, Jim Parsons, Lena Dunham, Edie Falco, Julia Louis-Dreyfus, and Amy Poehler. Neither “Breaking Bad” nor Bryan Cranston have actually reigned supreme at the Globes, so this might finally be their year!