Brad Pitt Is Back In Action In 'Bullet Train'! 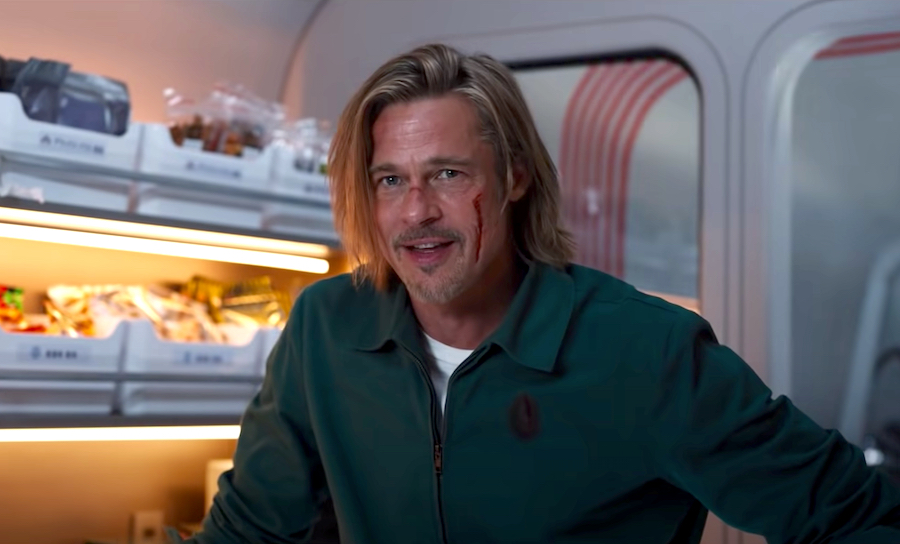 This Friday, August 5, marks Brad Pitt’s return to the big screen as a leading man. Bullet Train finds the actor in an action comedy as Ladybug, a trained killer, who reluctantly takes a job after a long hiatus (sounds a bit meta, no?) The plan is simple enough: board a train heading from Tokyo to Kyoto and collect a briefcase. Simple, that is, until Ladybug realizes he’s not the only assassin looking for the briefcase -- this ride is about to get bumpy!

Neon lights, punchy editing, and guns blazing is a quick summary of the trailer for Bullet Train. Plus, a few unexpected yet familiar faces like Joey King, Bad Bunny, Brian Tyree Henry, Michael Shannon, Hiroyuki Sanada, Logan Lerman, Zazie Beetz, and Aaron Taylor-Johnson are along for the ride; definitely a multi-talented bunch. Ladybug interacts with the eclectic cast of characters as he jumps between train cars and dodges punches. Pitt remarked to GQ that his character’s return to action might be premature: “You know, you do a month of therapy, you have one epiphany, and you think you’ve got it all figured out, and you’re never going to be forlorn ever again. That was that. I got this, I’m good to go!” But Ladybug might be in over his head this time.

The stars of #BulletTrainMovie stole the show on the Pink Carpet for the World Premiere in Los Angeles last night! Watch it exclusively in movie theaters Thursday.

Bullet Train’s director, David Leitch, took on the project back in 2020 after having proven himself as an effective action film director after helming projects like Atomic Blonde, Deadpool 2, and Hobbs & Shaw, demonstrating an impressive pivot from his previous career -- Leich was Pitt’s stunt double in Fight Club (1999), Troy (2004), and Mr. & Mrs. Smith (2005). Their relationship has veered into new creative territory, and now, instead of throwing himself through a pane of glass or diving through a window for Brad, he’s orchestrating an entire movie for him. Quite an impressive glow-up!

Bullet Train is based on the Japanese novel by Kôtarô Isaka titled Maria Beetle (a character played by Sandra Bullock in the film) that was a massive success in Japan upon its release. It’s the type of thriller that drags you to the edge of your seat, and judging from the trailer, the movie will do the same. Followed up, of course, with some laughter. And Brad Pitt! We cannot forget Brad Pitt. In the words of Quentin Tarantino, “He’s one of the last remaining big-screen movie stars. It’s just a different breed of man.”

Get on board in theaters Thursday: https://t.co/n41HXqZ1q2pic.twitter.com/uJeMIpCzEk