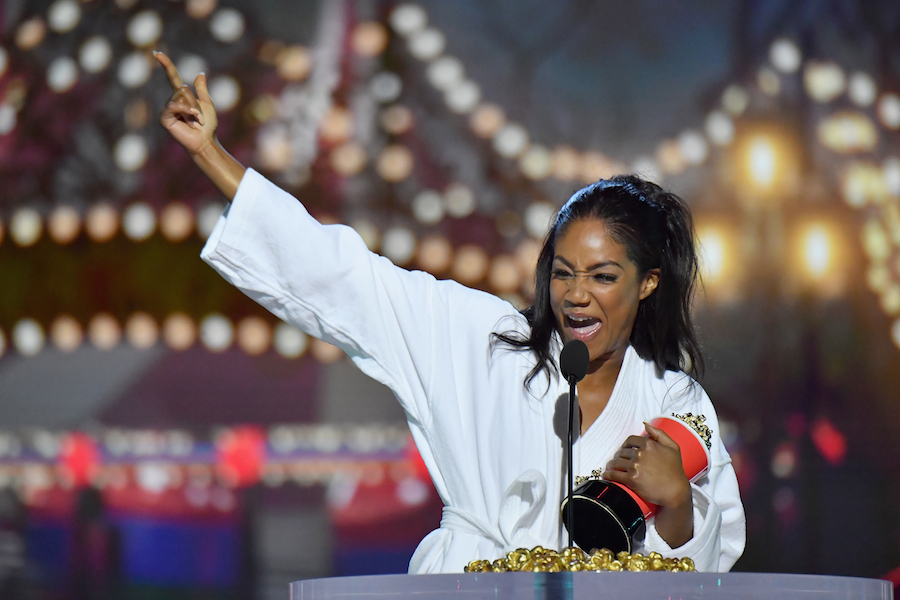 The golden popcorn statues were back at the 2018 MTV Movie & TV Awards last night! The show, filmed in Santa Monica, California, revealed the winners of categories that range from the typical Best Show to the unconventional Most Frightened Performance. Last year, MTV broke standard awards show protocol by removing “actor” and “actress” categories, evening out the field to focus on talent rather than gender. The awards showcased a variety of stars that offered inspirational messages, celebrating the necessity and influence of diverse representation.

Several of the biggest wins of the night highlighted all things Black Panther, which won four out of seven nominated categories! During the acceptance speech for Best Movie, Michael B. Jordan noted the incredible response the film received in the face of adversity, in an industry that once believed that narratives about people of color could not succeed. As of last month, the film has grossed over $1.3 billion! Jordan said that the film was meant to be universal, for all people regardless of ethnicity. He also won Best Villain, while protagonist Chadwick Boseman won Best Performance in a Movie and Best Hero. Boseman handed his Hero award to James Shaw Jr., a man who risked his life to stop a deadly shooting in Tennessee, referring to him as a real life hero.

The cast of "Stranger Things" also enjoyed multiple wins, taking home the title of Best Show. The adorable cast expressed their gratitude to fans, noting how far their young journeys have taken them. One member that was unfortunately absent due to an injury was Best Performance in a Show winner, Millie Bobby Brown. However, she did have a chance to record an acceptance speech from home, reminding audiences of all ages to remain quiet if there is nothing positive to be said. Her message against bullying comes after she left Twitter due to cyberbullying, and she offered herself as a contact if anyone was looking to be reminded of their value.

The winner of the unique yet amazing category Most Frightened Performance was Noah Schnapp, accepting the award in a beautiful deep red velvet jacket. Finally, the cast received Best Musical Moment for a scene shared by Brown and Finn Wolfhard.

The Trailblazer Award was given to actress Lena Waithe, who co-writes the popular Netflix series "Master of None", which led her to a historical achievement of winning Outstanding Writing for a Comedy Series during the 69th Primetime Emmy Awards, and became the first black woman to do so. Waithe thanked all of the important trailblazers that came before her, who paved the path for this success to be possible, most notably the subjects of the 1990 documentary Paris Is Burning.

Chris Pratt was given the MTV Generation Award, bestowed upon those who have achieved greatness in film. Artists who receive the award are recognized for depicting a variety of impressive roles, having flair in their personal and professional lives, and their all around inspiring talent. Pratt shared nine valuable tips to his fans, one of which was the necessary sentiment of “Breathe. If you don’t, you’ll suffocate.” The actor’s latest film, Jurassic World: Fallen Kingdom, is out this week!

The romantic Best Kiss category was won by Love, Simon stars Nick Robinson and Keiynan Lonsdale! The win represented more than just a triumph for the film, but for the move toward acceptance for LGBT communities. Lonsdale accepted the award singlehandedly, as Robinson was unable to attend, and perfectly captured the spotlight with his sparkling energy, attire, and makeup. He told viewers that they can live their dreams while wearing dresses, kissing the people they love regardless of gender, and being themselves. The sweet message was met with great applause from the audience.

Horror remake IT went beyond just capturing scares, and found its way into the hearts of those who love its talented cast. The "Losers Club" won the award for Best On-Screen Team, and it’s no surprise! The crew has received nonstop praise for their portrayals ever since the film came out, leaving audiences excited for the next installment. Unfortunately it won’t feature them, but they did create one amazing setup.

Best Comedic Performance went to Girls Trip star Tiffany Haddish, who appeared in some amazing skits during her hosting of the show. She “challenged” Prince T’Challa for the throne, shared a Force connection with Kylo Ren, and gave a hilarious opening monologue. She was the first black woman to host the MTV awards show, and if you haven’t watched yet, you should check out the highlights here!

Another less conventional category was Scene Stealer, awarded to Madelaine Petsch of "Riverdale" for her performance as Cheryl Blossom. The stunning redhead even has her own YouTube channel with two million subscribers!

It’s no surprise that Best Fight was given to Gal Gadot for her incredible performance in Wonder Woman. The scene in particular was for “Wonder Woman vs. German Soldiers”, but any of those fights were up to par for this category. The actress was actually pregnant during reshoots, living up to her character’s title.

Lady Gaga’s Gaga: Five Foot Two won the Best Music Documentary category, revealing Gaga’s more intimate moments behind the scenes with her family. The film is available on Netflix for those who haven’t caught it yet!

Kim Kardashian and Kris Jenner accepted the award for Best Reality Series or Franchise for their famed show "Keeping Up with the Kardashians". The mother and daughter duo took the stage in matching white attire, thanking the fans for their dedication throughout the past several years of the show.

The musical performances were also wins, as artists Chloe x Halle took the stage with “Warrior/The Kids Are Alright” in dazzling white jumpsuits. Mustard and Nick Jonas also delivered an exciting performance, singing “Anywhere” as the room lit up with various lasers and bright shades that went with the metallic hues of Jonas’ pants.

The MTV Movie & TV Awards have gifted us with a year of inspirational achievements, offering hope to the masses that once believed they did not have a spot in the industry. Be sure to remember the messages of the winners, and know that although their paths were not always easy, they were still attained.