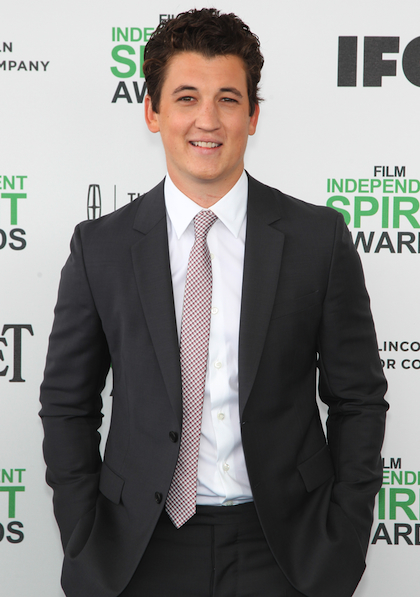 It seems like soooo much has happened since we last talked to him (see below), but that's probably because it has! If you feel like you’ve been seeing actor Miles Teller everywhere as of recently, you're not mistaken. And, to put it quite bluntly, it’s pretty awesome.

With his witty and sarcastic sense of humor, and his cute, pinch-your-cheeks good looks, it’s really hard to imagine a current film world without the charm of Teller, and honestly, what fun would a world like that even be?

An unlikely leading man in an industry filled with lock-jawed, primped and pampered pretty boys, Miles is a refreshing change from flash-in-the-pan actors who have no talent behind extremely good looks. Teller has the invaluable comedic timing behind his exterior, and with a charisma like his, it’s nice to see the 27-year-old start to gain more momentum in the roles and movies he is starring in.

Although he has been in a bunch of other things since before the 2010s rolled around, Teller really started garnering attention when he co-starred alongside Julianne Hough and Kenny Wormald in the 2011 remake of '80s cult classic Footloose. From then, he landed roles in other comedic, rowdy, Millennial-themed movies like Project X and 21 & Over (with Pitch Perfect’s Skylar Astin).

The NYU graduate took 2013 by storm when he starred in the sweet, frank, coming-of-age flick The Spectacular Now (with superstar Shailene Woodley), and then, earlier this year, he appeared in both That Awkward Moment with Zac Efron and Michael B. Jordan and Divergent (again, with Woodley, Theo James, and up-and-comer Ansel Elgort).

With the recent annoucement that Miles will be playing the role of Reed Richards/Mr. Fanastic in the upcoming Fantastic Four reboot, it’s not going to be too long until Teller will be regarded as a household name. He is also in talks to play Dan Aykroyd in an as-yet untitled biopic about the late comedian John Belushi. We will definitely be seeing every single project he does with a knowing sense that Miles knows exactly who he is and loves what he does!