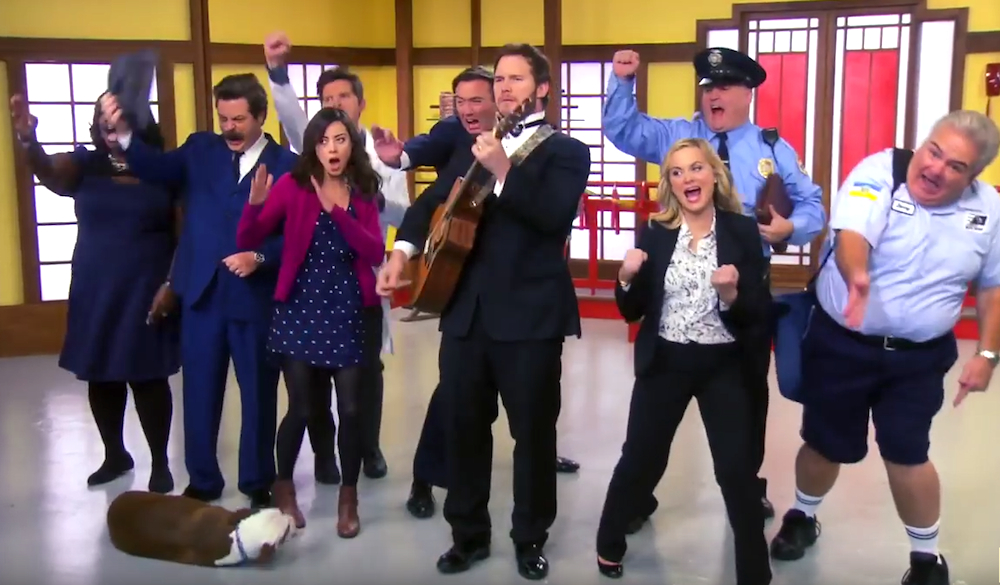 2015 has been a great year for television, particularly for comedies! A wide variety of comedies either began their run or finished, with a handful somewhere right in the middle. The comedies came in all shapes and sizes, including mockumentaries, family sitcoms, absurdist farces, and even one including Muppets. It was difficult for me to pick the top five best comedy episodes of 2015, but after much strife, I was able to come up with a good handful.

We were all sad to see this heartwarming NBC comedy “Parks and Recreation” bow out for its final season, which bent the rules of sitcom formats by jumping ahead three years in the future and showing us how the residents of Pawnee had much different lives. In this particular episode, April (Aubrey Plaza) has been offered a job in D.C., so she and hubby Andy (Chris Pratt) have to bid Pawnee goodbye. Andy hosts one last “The Johnny Karate Show” on public access, which celebrates Andy’s super giddy and adorable personality. Although all of the final “Parks and Rec” episodes were stellar, this one is a stand-out since the entire episode abandons its mockumentary format and focuses on Andy running around like a hyper puppy. I particularly liked the strange ads and the joke that Verizon-Exxon-Chipotle is proud to be one of America’s eight companies.

That’s right, “Black-ish” decided to go there. The quirky ABC comedy decided to take on “the n-word”, which has always been the subject of much controversy. “Black-ish” was clever enough to have the word’s confusion filtered through the Johnson family’s most innocent character, Jack (Miles Brown). After Jack sings the uncensored version of Kanye West’s “Gold Digger”, he shocks his entire school and is threatened with expulsion. This episode begs the question of who can say the “n-word” (as well as under what circumstances), much to hilarious results (I particularly enjoy Andre’s [Anthony Anderson] parents shooting it back and forth to one another, much to Andre’s dismany). “THE Word” was probably one of television’s bravest episodes, as it took on a hot-button issue without rattling its audience, which is quite an impressive feat.

It’s incredibly difficult to pick the best episode of “Unbreakable Kimmy Schmidt”, as every single one from this Netflix sitcom (created by the great Tina Fey) was gold and had me rolling on the floor laughing; I still think that Titus’s “Pinot Noir” is the best song of the year, hands down. In “Kimmy’s in a Love Triangle”, we learn that: Xanthippe (Dylan Gelula) is actually a nerd who loves to bird-watch and is taking AP Latin, Kimmy (Ellie Kemper) has to choose between Dong (Ki Hong Lee) and Logan (Adam Campbell), and Titus (Titus Burgess) takes an acting class that teaches him how to be straight. His acting coach (played by Dean Norrisof “Breaking Bad”) is determined to get Titus to be straight by shouting remarks at him such as “Madonna is overrated!” and preparing him for an Entourage 2 audition; arguably the best bit is when Titus learns that “there is no Entourage 2!” This episode proved how adorable “Unbreakable Kimmy Schmidt” is while also demonstrating that the show can include powerful commentary on social issues (such as Dong’s immigration troubles). This episode also introduced us to this brilliant number:

One of the greatest cult films of the early-2000s had to be Wet Hot American Summer, a small-budget comedy boasting impressive talent before their big breakouts (including Bradley Cooper, Amy Poehler, Elizabeth Banks, andPaul Rudd) and was hailed by comedy fans for its absurdity. These same fans (myself included) were more than thrilled to have the film turned into a limited prequel series for Netflix. In the original film, all of the actors (who were well into their late-20s and 30s) played teenagers working their last day at summer camp, while the TV series focused on the first day of camp, meaning that the original actors from the film returned to playing teenagers, 15 years later. “Campers Arrive” introduced us to the absurdity, which included a surprisingly normal chef, Arty (who would later go on to never bathe and only broadcast the non-existent radio), and the first sparks between Ben (Bradley Cooper) and McKinley (Michael Ian Black). I particularly enjoyed Andy’s (Paul Rudd) introduction, in which he rides in and leaps off a motorcycle. “Campers Arrive” proved that the TV series could be just as funny as the film.

Every year,Nathan Fielder seems to veer further and further into performance art territory. To follow up the great “Dumb Starbucks” adventure from Season 2, Season 3 saw Fielder set up a fake workout system to help find free labor for a moving company, stage a play so that smokers could smoke in a bar, and created a “Holocaust awareness” line of jackets. The greatest adventure, though, was “The Hero”, in which Fielder spent seven months learning how to walk on a tightrope. In the episode Fielder tries to turn an ordinary person into a hero and finds Ventura local Corey, an everyday guy living with his grandparents who wants to change his life. Fielder decides to help by literally impersonating Corey (he has a special effects artist create him a literal Corey disguise) and walking across a tightrope 80 feet in the air in Downtown Los Angeles in order to raise Breast Cancer awareness. The episode is even more insane than “Dumb Starbucks” yet is probably more heartwarming. Fielder seems to sincerely want to help Corey, as he even sets up a fake OkCupid! profile for him and finds him a girlfriend. I was personally impressed by Fielder’s dedication to not only learning how to tightrope but to becoming Corey. Here is Fielder (in disguise as Corey) giving an interview on a L.A. morning radio show "Heidi & Frank" regarding his tightrope stunt:

What were some of YOUR favorite comedic episodes of 2015?