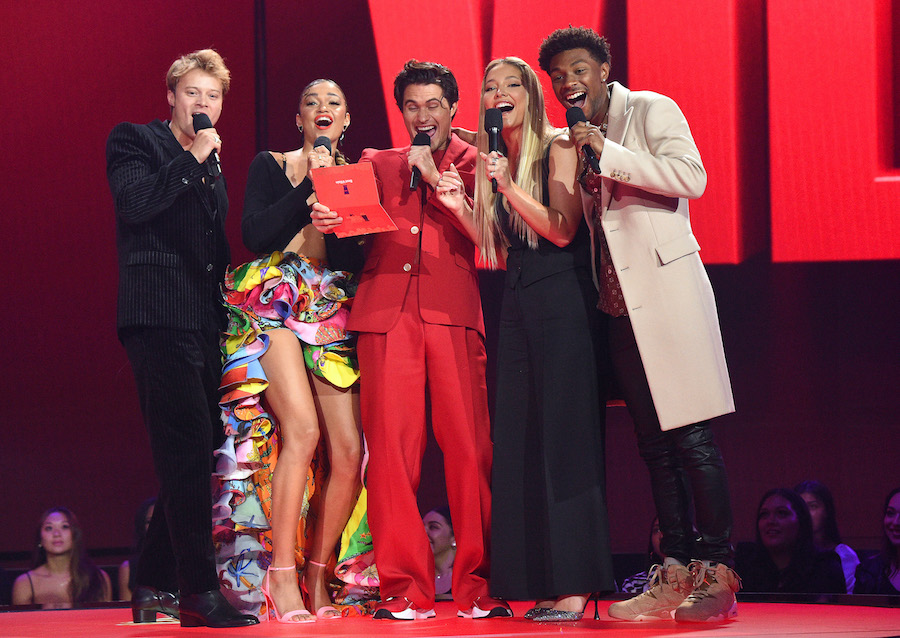 In-person awards shows are slowly coming back, and returning with them are stunning styles and on-air surprises that only a Hollywood event could bring. The 2021 MTV Movie & TV Awards did not disappoint in either department, and we’ve gathered all the highlights for you!

Celebs are clearly excited to show off their style on the red carpet, and this year saw stars stepping out in bright colors and sequined ensembles, embracing the fun spirit of the show.

"Grown-ish" star Yara Shahidi repped her own Yara x Adidas collection with a bold printed jumpsuit and yellow bustier, combining comfort and fashion in one!

The cast of "Outer Banks" gave us the cutest group pictures and some of the best looks of the night. Stunning IRL pair Chase Stokes and Madelyn Cline matched in red ensembles and later won for Best Kiss! Meanwhile, Madison Bailey looked glamorous in a patterned high-low Versace skirt, and Rudy Pankow and Jonathan Daviss were stylish in their black and neutral silk shirts and loose blazers. This is one attractive cast!

May I present to you... the frustratingly attractive cast of #OuterBanks doing a kick line at the #MTVAwards.

The MTV Awards are not without surprises, and this year delivered lots of laughs, gasps, and kisses.

Addison Rae and her He’s All That co-star Tanner Buchanan showed audiences their chemistry with a steamy kiss during their presentation. The video went viral, and it made us even more intrigued to see the movie, which drops on Netflix this summer!

Chase Stokes and Madelyn Cline also gave the audience a little PDA after their win for Best Kiss. The couple took a moment to show the skills that earned them the award in the first place, continuing a tradition that includes iconic screen couples like Ryan Gosling and Rachel McAdams in its lip-locking ranks.

Scarlett Johansson, who accepted the Generation Award over Zoom, began her speech only to be slimed by husband Colin Jost, jokingly referring to the wrong awards show.

Host Leslie Jones had audience members giggling with her "Bridgerton"-inspired skit, where she edited herself into the famous “I burn for you” scene with star Regé Jean-Page and gave it the "Snyder Cut" treatment. We would all have done the same!

I now present to you...the Duchess of MTV Land and the Duke of Hastings #MTVAwardspic.twitter.com/FSl3LPmKSi

This year definitely delivered some of our favorite looks and celebrity antics, and we can’t wait to see more red carpets and co-star camaraderie when more shows make their way in-person!